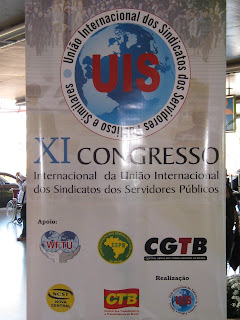 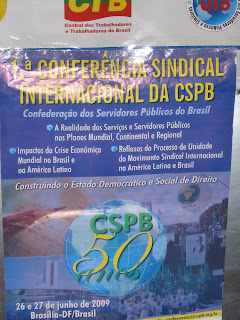 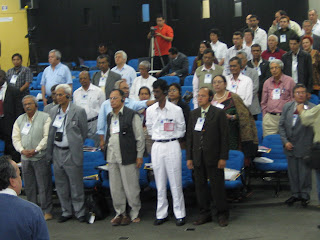 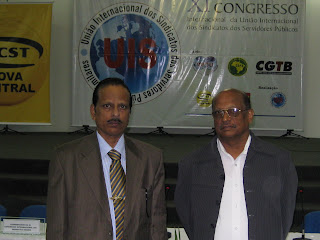 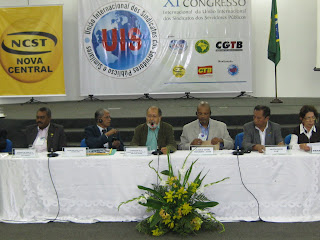 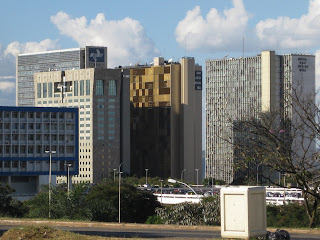 XI WORLD CONGRESS OF TRADE UNION INTERNATIONAL of Public & Allied Employees affiliated to WFTU [World Federation of Trade Unions] commenced in BRASILIA the Capital City of BRAZIL on 28th June 2009.
150 DELEGATES REPRESENTING MORE THAN 30 COUNTRIES PARTICIPATING IN THE WORLD CONGRESS
CONFEDERATION OF CG EMPLOYEES REPRESENTED BY COMRADES K.K.N.KUTTY SECRETARY GENERAL AND K.RAGAVENDRAN SECRETARY GENERAL OF NFPE
Dear Comrades! - The 11th World Congress of TUI Public & Allied employees has opened in the capital city of Brazil on 28th June 2009. 150 Delegates from more than 30 countries attended the Congress. The WFTU leader inaugurated the Congress.
Four Major Trade Union Centres of Public & Allied Employees organisations of Brazil have come forward to unitedly host the Congress in Brasilia and the inaugural session of the Congress had a Presidium Panel consisting of the TUI President and leaders of these four organisations.
The Congress inaugural session had the flavour and fervour of recent revolutionary changed undergoing by several countries of Latin America. The Congress is a befitting reply from the employees organisations of Public Services to the challenges thrown on us by the neo-liberal policies as well as the recent international economic crisis unleashed on the people.
The General Secretary of TUI Comrade Sukomal Sen had presented his Congress Report covering all details of recent economic turmoil and its impact on the employees and the future task of building a stronger TUI in order to defend the rights and privileges of Public & Allied employees.
The Delegates from all countries have started to deliberate on the Report of the General Secretary. The debate will continue today and tomorrow. A comprehensive Resolution on future Action Plan is expected to be adopted by the Congress on 30th June 2009 besides electing a new set of office bearers to the TUI.
Our Delegation from the Confederation of CG Employees will place the situation in India about the impact of neo-liberal policies on Central Government Employees today in the Congress.

Congratulations. I wish you and our delegation all success. Your partici-
pation will surely inspire C.G.
movement in India. All the Best.

Sir,
Hope you have returned back after successfully participating in WFTU.

Is there any news on 2nd installment of arrears ?
& ACP orders ?