MEMBER (P) ADDRESSED TO ALL HEADS OF CIRCLES FOR TIMELY HOLDING OF JCM REGIONAL COUNCIL AND OTHER PERIODICAL MEETINGS & COPY ENDORSED TO FEDERATIONS.

As you are aware, the Postal Joint Council of Action served a notice of indefinite strike with effect from 17.01.2012, accompanied by a 25 point Charter of Demands. All the items were discussed in detail in a series of meetings taken by Secretary/Members of the Postal Services Board and minutes of meetings were sent to you vide communication dated 16.01.2012.

2.         In this regard, your attention is invited to para 5(m) of the minutes of the meeting, vide which all Heads of Circles have been requested to ensure timely holding of JCM Regional Council and other periodical meetings. This is to further remind you to comply with the above said decision so that the Staff Side has no grievance in this regard. 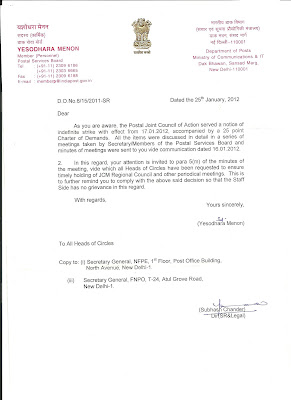 ALL THE COMRADES ATTENDING THE ENSUING STUDY CAMP AT PURI ODISHA FROM 04.02.2012 - 05.02.2012 ARE WELCOME TO THE HOLY CITY OF LORD JAGANNATH.THE VENUE STANDS IN A VERY PRIME LOCATION.
THAT IS HOTEL SONALI SEA BEACH PURI.IT IS AROUND 2 KM FROM THE RAILWAY STATION PURI.ALL THE COMRADES ARE REQUESTED TO INTIMATE THEIR DETAILS OF JOURNEY LIKE,TRAINNAME AND NO.THEY ARE COMING,TENTATIVE ARRIVAL TIME ,THEIR DEPARTURE TRAIN WITH TIME SO THAT IT WILL CONVINEINT FOR US FOR THEIR SMOOTH TRANSPORTATION FROM STATION TO THE VENUE AND VICE VERSA.THE HOTEL BUS WILL BE THEIR TO CARRY OUR COMRADES FROM STATION TO VENUE.OUR RECEPTION COMMITTEE WILL BE THEIR FOR SMOOTH CONVEYANCE.WE ARE GIVING THE MOBILE NO .SOME PRIME MEMBER OF RECEPTION COMMITTE SO THAT OUR COMRADES COMING FROM VARIOUS PARTS OF COUNTRY CAN CONTACT THEM IN THEIR NEED DURING THIS PERIOD.

PURI WORKSHOP FROM 04.02.2012 TO 05.02.2012
PROGRAMME
4.2.2012 10.00 Flag hoisting
Com. M. Krishnan, Secretary General, NFPE & CHQ President
10.20 Com. M. Krishnan will be on the Chair, CHQ President
10.30 Welcome Address: Com. R. C. Mishra, Vice President, CHQ
10.45 Introduction about the aim & object of the workshop
Com. K. V. Sridharan, General Secretary
11.15 Disciplinary Rulings – “An Introduction, analysis & Challenges before Trade Unionists”
Com. M. C. Nair, Retd. SSPos, Trivandrum
13.15 LUNCH
14.15 Contributory Negligence – Protection from its misuse.
Com. M. R. Meenakshisundaram, Retd. Supervisor, Chennai GPO
16.00 Right to Information Act & Role of Trade Union activists.
Com. B. G. Tamhankar Ex-CHQ President
17.30 Group Study
Note: - All the 180 delegates will be divided into 12 groups consisting of 15 delegates in each group. The leaders of the groups will be selected among the group members during lunch break. The leaders or one representative from each group can raise any questions/doubts on disciplinary matters. Therefore there will be a group study for 1 hour from 17.30 hours to 18.30 hours.
18.30 to 20.00 Interaction sessions on all the topics discussed on 04.02.2012
Presidium will be Com. M. Krishnan, CHQ President, K. V. Sridharan, General Secretary, Com. M. C. Nair, Com. B. G. Tamhankar & Com. M. R. Meenakshisundaram.
20.00 to 21.00 Questions will be asked from the Presidium to the participants to ascertain the understanding about the topics taken on that day’s class and discussions.
21.00 Dinner
Note: - If the business could not be completed within the prescribed time, night session, if need be, will be organized.
05.02.2012 Com. Mangesh Parab, Working President (CHQ)
08.00 to 10.00 Group Study by the respective groups separately
10.00 “Leaders qualities of cadres & the Role of P3 in building joint movement”.Introduction by: Com. K. Ragavendran, Ex-Working President, CHQ
11.00 to 11.30 Discussion by representatives of 12 groups
11.30 to 14.00 “How to represent the issues by citing rules before administration”
Com. K. V. Sridharan, General Secretary will initiate the debate
Model questions will be given to each group in previous day end. The group leader/representative will present their case for the consumption of others. The group study from 08.00 AM to 10.00 AM has been organized for that purpose alone.
14.00 LUNCH
15.00 to 17.00 Postal Trade Union history & our present task
Com. M. Krishnan, CHQ President & Secretary General NFPE
17.00 to 19.00 Objective type questions will be supplied to all the participants. All are requested to furnish answers. No options in the question will be provided. The valuated result will be intimated by post to the respective participants.
19.00 Presentation of certificates to the Participants.
19.30 Feed back from the delegates
20.15 Vote of thanks Com. Rajesh, Divisional Secretary, Puri
As we have confined the workshop for two days, it will be in tight schedule. More time will be allotted to the participants to exchange and share their experiences with other delegates. All delegates may please come with full devotion to attend the workshop that they will not get any spare time during these two days. A comprehensive note on disciplinary rulings and other topics will be supplied to the delegates.
Let us make the workshop a fruitful and educative one.
Note: -
(i) The Receiption committee will organize a sightseeing tour on 06.02.2012 to the willing participants. The expenditure towards hiring bus shall be borne by the participants.
(ii) The TA/DA for CHQ office bearers/Mahila Sub Committee members may please be borne by the respective circle unions as this is exclusively an educative programme. The Circle Secretaries are requested for this effect.
(iii) All delegates are requested not to leave the workshop on both days and should not have any other programmes. Don’t book for your return ticket on 05.02.2012 before 11 PM.
Posted by NFPE at 3:26 PM No comments:

The Women Sub-Committee of the Confederation of CG Employees and Workers calls upon the entirety of leadership of all Affiliated Organizations to launch effective Programmes like Seminars, Conventions, Special Meetings of Women Workers all over the country on behalf of their respective organisations to befittingly celebrate the “INTERNATIONAL WOMEN DAY”. This is an occasion to approach all women members to unionize them in our unions and educate them as well all other menfolk about the rights and privileges of women employees as well as their special problems encountered at the work spots and in society. Please send your reports to the headquarters of Confederation after observing them effectively.
Com. Gita Ghoshal - Chairperson & Com. C P Shobana - Convenor.
Women Sub Committee
Posted by NFPE at 10:33 AM No comments:

This is to give notice that the employees who are members of the affiliates of the Confederation of Central Government employees and workers will go on one day's strike on 28th February, 2012. The charter of demands in pursuance of which the employees will embark upon the one day strike action is enclosed.

2) Concrete measures for linkage of employment protection with the concession/incentive package offered to the entrepreneurs,

3) Strict enforcement of all basic labour laws without any exception or exemption and stringent punitive measures for violation of labour laws.

5) Creation of a National Social Security Fund with adequate resources in line with the recommendation, of NCEUS and Parliamentary Standing Committees on Labour, Stoppage of disinvestment in Central and State PSUs, the Central Trade Unions also demand immediate action by the Govt. of India to en sure:-

7) Amendment of Minimum Wages Act to ensure universal coverage irrespective of the schedules and fixation of statutory minimum wage at not less than Rs 10,000/-,

8) Remove the ceilings on payment and eligibility of Bonus, Provident Fund; Increase the quantum of gratuity.

10) Compulsory registration of trade unions within a period of 45 days and immediate ratification of ILO conventions 67 and 96.

2. Fill up all vacant posts and create posts on functional requirements

3. Revise wages of CGEs with effect from 1.1.2011 and every five years thereafter.

4. Regularize the GDS, daily rated workers, contingent and casual workers by brining about a definite scheme of regularization.

6. Stop the move to introduce the productivity linked wage system; Performance related pay; introduce PLB to in all Departments; remove the ceiling of emoluments for bonus computation.

7. Settle all items of anomalies (including the MACP related anomalies) raised in the National and Departmental Anomaly committees within a fixed time frame of two months; set up the anomaly committees in those Departments where it has not been set up till date with the Standing Committee members of the National Council; convene the meeting of the Departmental Council in all Ministries/Department once in three month as envisaged in the JCM Scheme

8. Make the right to strike a legal right and stop curtailment of T.U. rights

10.Raise the interest rate for GPF. Revise the OTA and Night duty allowance and stitching and clothing rates of uniforms

11.Merge DA with Pay for all purposes including pension as and when the DA rates croses the 50% mark.

CONSTITUTION OF COMMITTEE FOR ORGANIZATIONAL

RESTRURCTURING IN DEPARTMENT OF POSTS

The Competent Authority is pleased to constitute a committee as detailed below:

●To revisit the norms for creation of new Postal Division and Regions as wee as upgradation of Class II Divisions into Class I Divisions.

●   To study the feasibility of organizational restricting of fields formations (Circle and below) keeping in view the emerging needs for India Post in new socio-economic environment.

●  To study the feasibility of strengthening / creation of Postal Assistants/ Sorting Assistants posts in view of increased need of System Administrators.

●  Any other relevant issue as may be assigned by the Competent Authority later.

3. The time period of this Committee to submit its recommendations is three months.

All Central Trade Unions e.g. INTUC,BMS,AITUC,CITU, HMS,AIUTUC,UTUC,LPF, SEWA and All Federations and Organizations of Central & State Government Employees  Teachers, and Employees of Central & State Public Sector undertakings have decided to organize one day All India Strike on 28th February-2012. The Postal JCA has decided to join the working class in its fight against anti-people & anti-working class policies of the Government. The tour programme of All India leaders is enclosed herewith for intensive campaign meetings at various stations. The Circle Secretaries and All India Office Bearers of the respective Circles will make arrangements to organize the meeting. General Membership of all unions should participate in the meeting.

Strike notice will be served to Secretary, Department of Posts on 10.02.2012 by JCA leaders. Lunch hour demonstration should be organized in front of all working places.

The Postal JCA Call upon the entirety of Postal , RMS and GDS employees to make the one day All India Strike 0n 28th February, 2012 a grand success.

TOUR PROGRAMME OF ALL INDIA LEADERS

Note:      All Meetings should take place as per schedule.