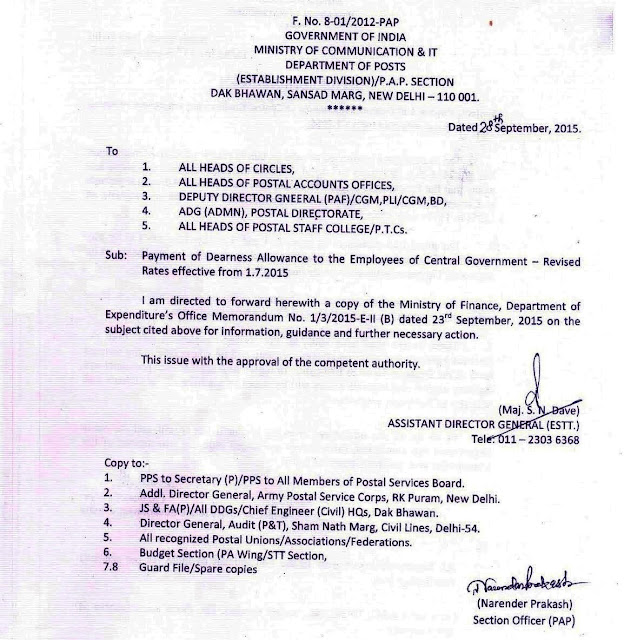 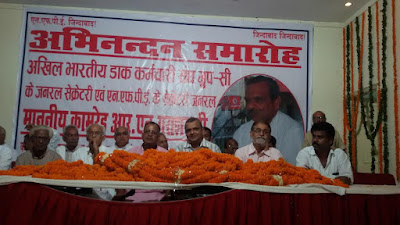 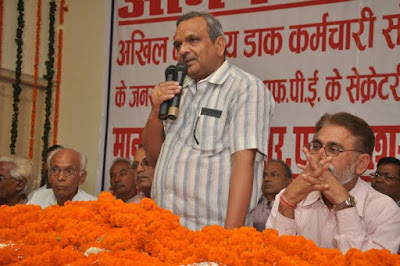 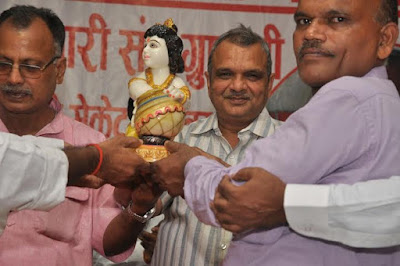 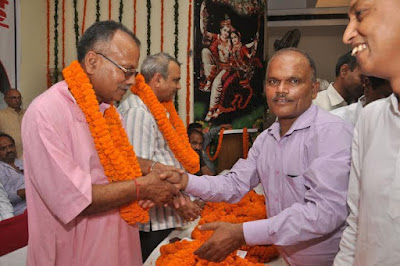 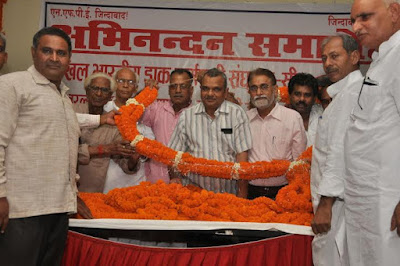 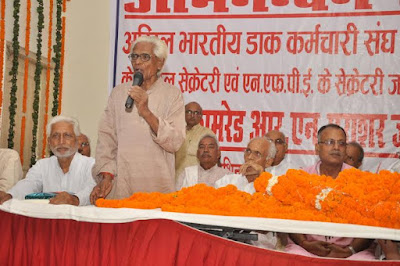 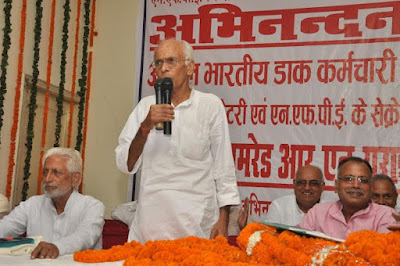 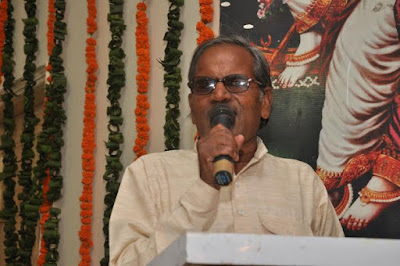 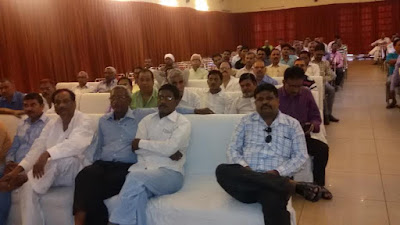 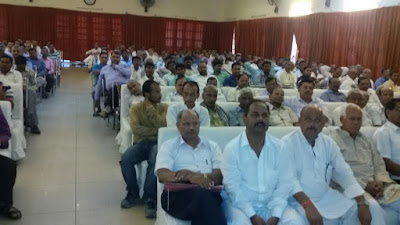 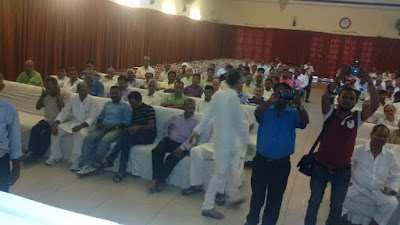 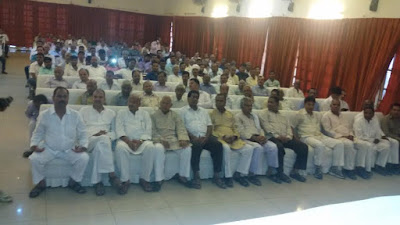 The undersigned is directed to refer to this Department's OM No. 42/10/2014-P&PW(G) dated 27th April, 2015 on the subject mentioned above and to state that the President is pleased to decide that the Dearness Relief (DR) payable to Central Government pensioners/family pensioners shall be enhanced from the existing rate of 113% to 119% w.e.f. 1st July, 2015.

3. Central Government Employees who had drawn lump sum amount on absorption in a PSU/Autonomous body and have become eligible to restoration of 1/3rd commuted portion of pension as well as revision of the restored amount in terms of this Department's OM No. 4/59/97-P&PW (D) dated 14.07.1998 will also be entitled to the payment of DR @ 119% w.e.f. 1.7.2015 on full pension i.e. the revised pension which the absorbed employee would have received on the date of restoration had he not drawn lump sum payment on absorption and Dearness Pension subject to fulfillment of the conditions laid down in para 5 of the O.M. dated 14.07.98. In this connection, instructions contained in this Department's OM No.4/29/99-P&PW (D) dated.12.7.2000 refer.

4. Payment of DR involving a fraction of a rupee shall be rounded off to the next higher rupee.
5. Other provisions governing grant of DR in respect of employed family pensioners and reemployed Central Government Pensioners will be regulated in accordance with the provisions contained in this Department's OM No. 45/73/97-P&PW (G) dated 2.7.1999 as amended vide this Department's OM No. F. No. 38/88/2008-P&PW(G) dated 9th July, 2009. The provisions relating to regulation of DR where a pensioner is in receipt of more than one pension will remain unchanged.

6. In the case of retired Judges of the Supreme Court and High Courts, necessary orders will be issued by the Department of Justice separately.

7. It will be the responsibility of the pension disbursing authorities, including the nationalized banks, etc. to calculate the quantum of DR payable in each individual case.

8. The offices of Accountant General and authorised Pension Disbursing Banks are requested to arrange payment of relief to pensioners etc. on the basis of these instructions without waiting for any further instructions from the Comptroller and Auditor General of India and the Reserve Bank of India in view of letter No. 528-TA, 11/34-80-11dated 23/04/1981 of the Comptroller and Auditor General of India addressed to all Accountant Generals and Reserve Bank of India Circular No. GANB No. 2958/GA-64 (ii) (CPL)/81 dated the 21st May, 1981 addressed to State Bank of India and its subsidiaries and all Nationalised Banks.

9. In their application to the pensioners/family pensioners belonging to Indian Audit and Accounts Department, these orders issue after consultation with the C&AG.

--Sd/-
(Charanjit Taneja)
Under Secretary to the Government of India
To,

1. All Ministries/Departments of the Government of India/Chief Secretaries and AGs of all States/UTs.

2. Copy for information to Reserve Bank of India(RBI) and all authorized Pension Disbursing Banks.

Please visit this Department's website http://pensionersportal.gov.in for the orders on pension matters including above orders.

2nd September 2015. Historic  Strike  was a grand success in almost all the  sectors of working class whether it is Government Sector, Public Sector, Private Sector – organized or unorganized. Crores and crores workers have taken part in it and established so many mile stones in the history of working class movement. The grand success of this strike in strategic fields like Road transport, Coal Mines, Petroleum, Power, Tele Communication is one of the important phenomenas.

This strike was organized by the sponsoring Committee of all Central Trade Unions pursuing 12 points Charter of Demands including withdrawal of anti Labour Laws amendments and FDI in strategic sectors, in protest against lend acquisition Ordinance and Bill and peasants distress and for changing the neo-liberal path of development.

The strike was the result of hard labour of the thousands of Trade Union activists who mobilized and launched vigorous campaign for the months together..

This strike of crores of workers has given clear indication to present Central Government that now the worker has awakened and he is not going to allow the attacks and dangers being unleashed on him in the pursuance of neo-liberal economic policies.

This time this strike was a grand success among Central Government Employees.

In Postal except some circles it was grand success and better than the previous strikes. It shows that the Postal Workers are also not agreed to accept the proposals and recommendations submitted by Task Force Committee headed by T.S.R. Subramanian Ex. Cabinet Secretary as Chairman who laid out a road map of corporatization and Privatization of Department of Post. This is also culmination of anger and protest of Postal Employees that the 50% Work force of this Department i.e. Gramin Dak Sevaks, who are not treated as Civil servant. The demand of NFPE and PJCA for inclusion of GDS in 7th CPC has not been accepted by Government of India. The Cadre restructuring proposals of all Cadres of Postal; were agreed long back but not being implemented. Thousands and thousands of posts in all Cadres are also not being filled besides vigorous pursuance by the NFPE and PJCA.

The PJCA comprising NFPE, FNPO, AIPU-GDS (NFPE) and NUGDS has viewed very seriously with grave concern the totally negative attitude of the Government of India and Department of Post and has decided to go on indefinite strike from 23rd Nov-2015 on the above demands.

NFPE appeals to the entirety of Postal, RMS and GDS Employees to start preparations right now to make the indefinite strike from 23rd November-2015a grand success to compel the Government of India and Department of Post to concede our demands. Nothing in past has been achieved without struggle and nothing is going to be achieved without struggle. So unite and fight and achieve.

UNITY FOR STRUGGLE AND STRUGGLE FOR UNITY.

Roles & Responsibilities of various officials & officers on implementation of 'Core Insurance Solution' and set-up of 'Central Processing Centre' for PLI & RPLI and processing of requests in CPCs where the request received - reg. (Click the link below for details)


https://drive.google.com/file/d/0BxsifJb4w3ZAWGRnR1l6a0lzSDQ/view?pli=1
Posted by NFPE at 1:55 PM No comments: 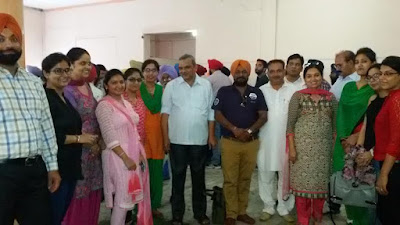 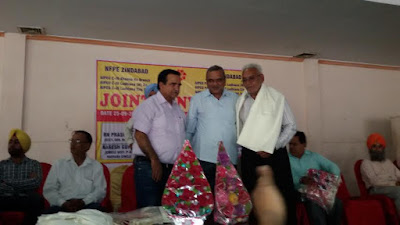 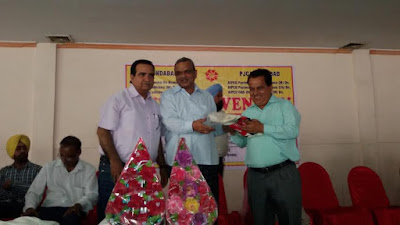 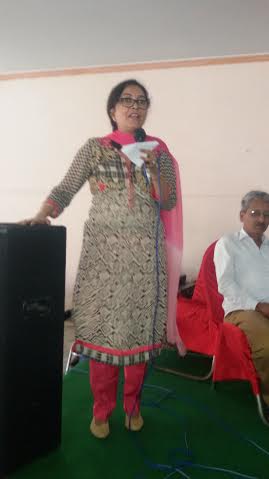 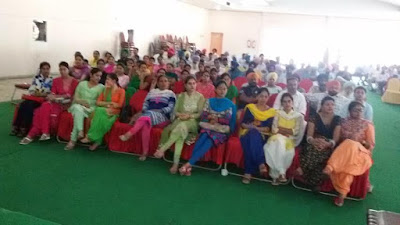 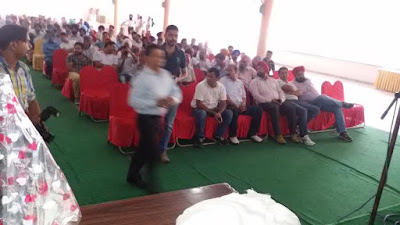 27th meeting of Standing Committee of Voluntary Agencies (SCOVA) under the Chairmanship of Hon`ble MOS (PP).
(Click the link below for details)
http://ccis.nic.in/WriteReadData/CircularPortal/D3/D03ppw/Scova.pdf

The undersigned is directed to refer to this Ministry’s Office Memorandum No.1/2/2015-E-II (B) dated 10th April, 2015 on the subject mentioned above and to say that the President is pleased to decide that the Dearness Allowance payable to Central Government employees shall be enhanced from the existing rate of 113% to 119% with effect from 1st July, 2015.

3.         The additional installment of Dearness Allowance payable under these orders shall be paid in cash to all Central Government employees.

4.         These orders shall also apply to the civilian employees paid from the Defence Services Estimates and the expenditure will be chargeable to the relevant head of the Defence Services Estimates. In regard to Armed Forces personnel and Railway employees, separate orders will be issued by the Ministry of Defence and Ministry of Railways, respectively.

5.         In so far as the employees working in the Indian Audit and Accounts Department are concerned, these orders are issued with the concurrence of the Comptroller and Auditor General of India.

Sd/-
(A. Bhattacharya)
Under Secretary to the Government of India

Authority: www.finmin.nic.in
(Click the link below for  DA Orders of Min. of Finance)


http://finmin.nic.in/the_ministry/dept_expenditure/notification/da/da01072015.pdf
Posted by NFPE at 2:53 PM No comments:

ADVERTISEMENTS ISSUED BY VARIOUS MINISTRIES/DEPARTMENTS/ORGANISATIONS IN REGARD TO SPECIAL RECRUITMENT DRIVE FOR FILLING UP OF VACANCIES FOR PERSONS WITH DISABILITIES - REG. Click here to view

Processing of files referred to DOPT for advice/clarification: Draft OM by DoPT for comments CLICK HERE FOR DETAILS

MTS RECRUITMENT EXAMINATION- 2015-UP CIRCLE (Click the link below for details) http://asrb2014.org/indiapost/Admitlogin.aspx

The Postal Joint Council of Action comprising NFPE, FNPO, AIPE Union GDS (NFPE) & NUGDS has viewed with grave concern, the total negative attitude of the Central Government towards the genuine demands of the Postal employees which includes the revision of wages and service condition of the Gramin Dak Sevaks by 7th CPC, implementation of Cadre Restructuring Agreement and filling up of all vacant posts in all cadres of Department of Posts.

As the 7th CPC  may  submit its report  any time before 31st  December,2015 , delay in settling the above demands will  result in denial of justice to 5.5 lakhs Postal Employees .

In view of the above serious situation the PJCA  unanimously decided to  revive the  postponed indefinite strike of  May 6th  and  to commence  the indefinite  strike  from 23rd November, 2015, the date  from which JCM National Council  Staff Side  is going  on indefinite  strike. It is further  decided  that  in case  the JCM  Staff Side  change their decision the PJCA  will go on  strike from 23d November,2015 itself for the following  demands:

(i)Include GDS in 7th CPC for wage revision and other service related matters.

The Secretary Department of Posts, Dak Bhawan, New Delhi-110 001 for information and necessary action.
Posted by NFPE at 1:04 PM No comments: