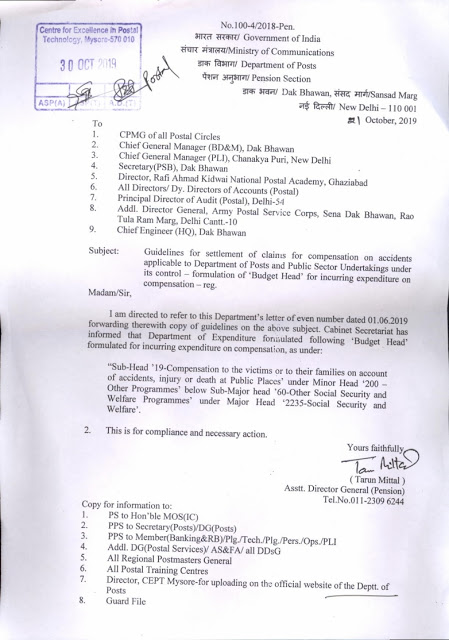 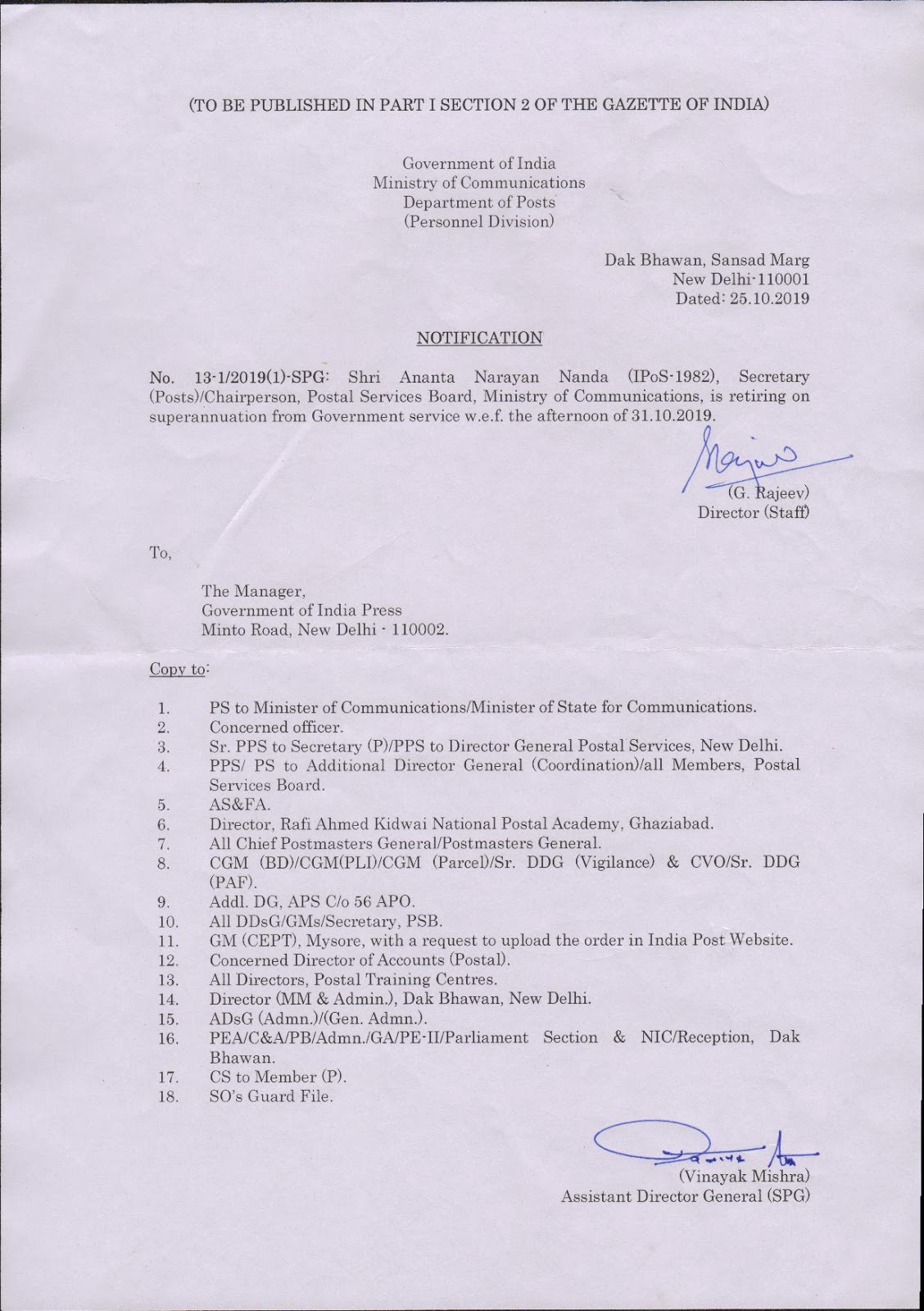 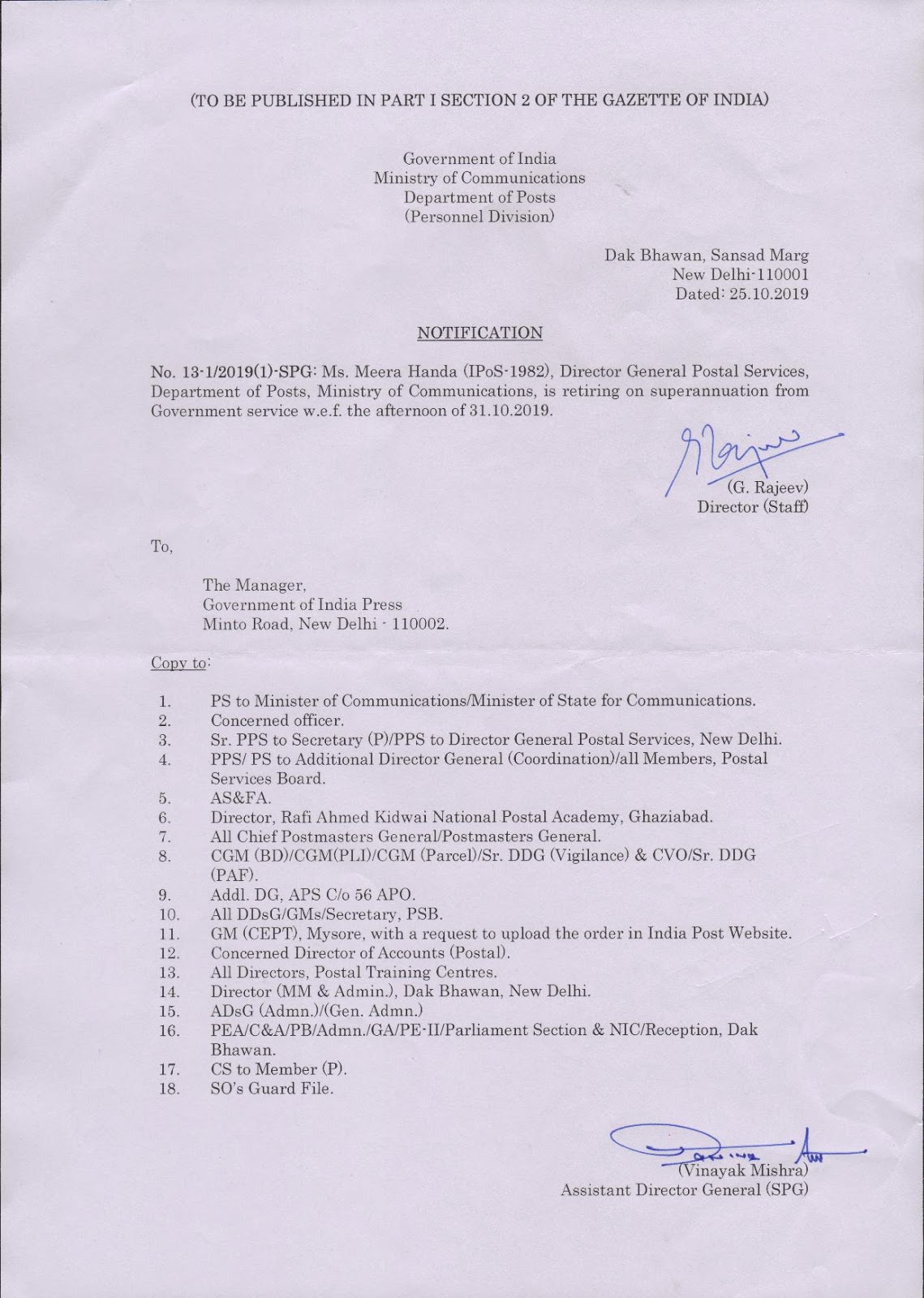 Subject: Implementation of recommendations of Kamlesh Chandra Committee on giving preference to Casual Labourers in selection to GDS posts-reg.

The undersigned is directed to refer to para 14.26 of GDS Committee on giving preference to Casual Labourers in selection to GDS posts. The Committee observed that, the scheme of employing casual labourers is not in vogue from 01.09.1993 onwards and those eligible among those who were selected before 01.09.1993 would have been selected to eligible posts by now. Department has earmarked 25o/o of vacancies for them for recruitment as Multi Tasking Staff in Post/Mail Offices as per Recruitment Ru1es. The committee is of the view that there is no necd to notify GDS vacancies to Casual Labourers as of now. Such a provision will indirectly pave the way for backdoor entry of ineligible candidates to GDS service. Department may examine this aspect.

2. The matter has been examined and following orders are issued:-

(i) As per the scheme for Casual Labourers (Grant of Temporary Status and Regularisation, temporary status is granted to those Casual Labourers who were in employment as on 10.09.1993, subject to fulfillment of certain conditions. Such Casuai Labourers who complete 13 years of service are to be treated at par with temporary   MTS employees and are entitled to various benefits viz. leave, holidays, CGEGIS, GPF, Medical aid, LTC etc. and counting of temporary service after regularization for retirement benefits. Further, engagement of Casual Labourers is not permissible after the cutoff date.

RATE OF DEARNESS ALLOWANCE APPLICABLE W.E.F. 01.07.2019 TO THE EMPLOYEES OF CENTRAL GOVERNMENT AND CENTRAL AUTONOMOUS BODIES CONTINUING TO DRAW THEIR PAY IN THE PRE-REVISED PAY SCALE/GRADE PAY AS PER 5TH CPC.(Click the link below to view)
https://doe.gov.in/sites/default/files/MX-M452N_20191025_202541_0.pdf

CONSOLIDATED GUIDELINES REGARDING MACPS
(Click the link below to view the DOP letter)
http://utilities.cept.gov.in/dop/pdfbind.ashx?id=3891 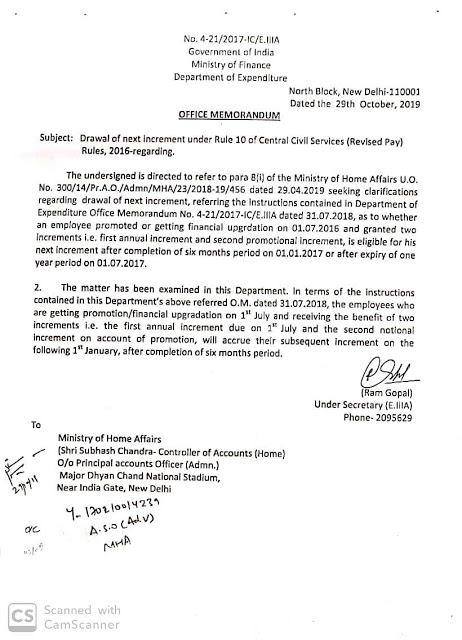 GRANT OF ONE TIME RELAXATION TO THE CENTRAL GOVT.EMPLOYEES WHO HAVE AVAILED LTC - 80 AND TRAVELED BY AIR BY PURCHASING TICKET FROM AUTHORITIES OTHER THAN AUTHORIZED AGENTS. 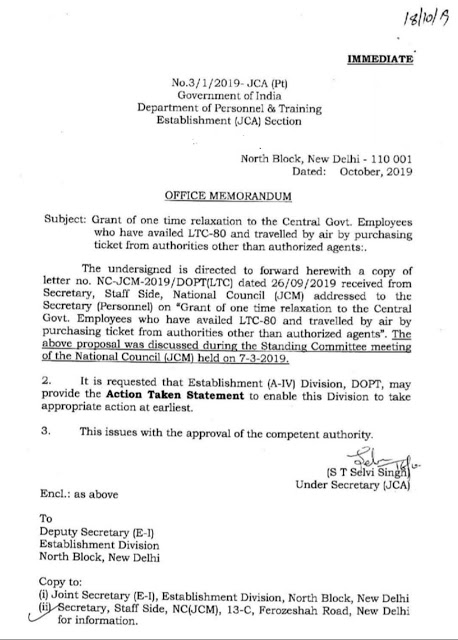 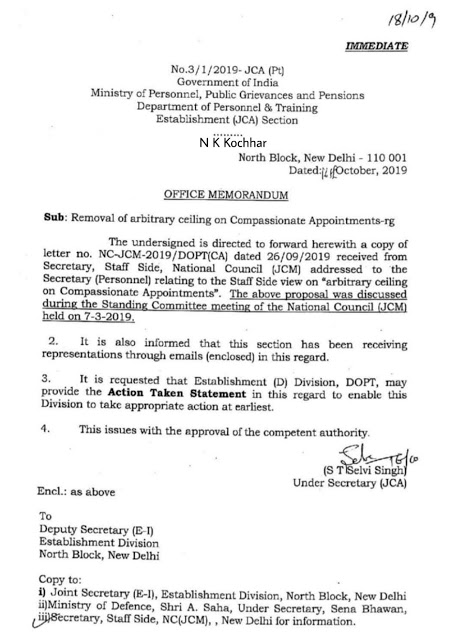 RATE OF DEARNESS ALLOWANCE APPLICABLE W.E.F 01-07-2019 TO THE EMPLOYEES OF CENTRAL GOVERNMENT AND CENTRAL AUTONOMOUS BODIES CONTINUING TO DRAW THEIR PAY IN THE PRE-REVISED PAY SCALE / GRADE PAY AS PER 6TH CENTRAL PAY COMMISSION 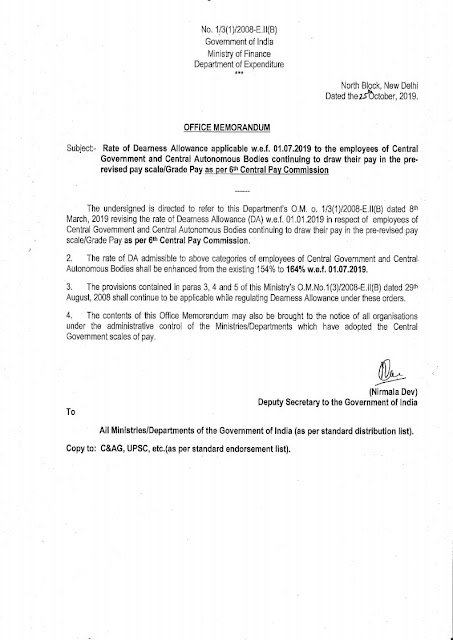 I am directed to refer to Directorate’s communications number 141-141/2013-SPN-II dated 17.01.2019 vide which revised “Guide Lines for Transfer” was circulated to all Postal Circles. References were received from various Postal Circles/Service Associations pointing out some difficulties and seeking clarifications. The references have been examined and clarified as under: 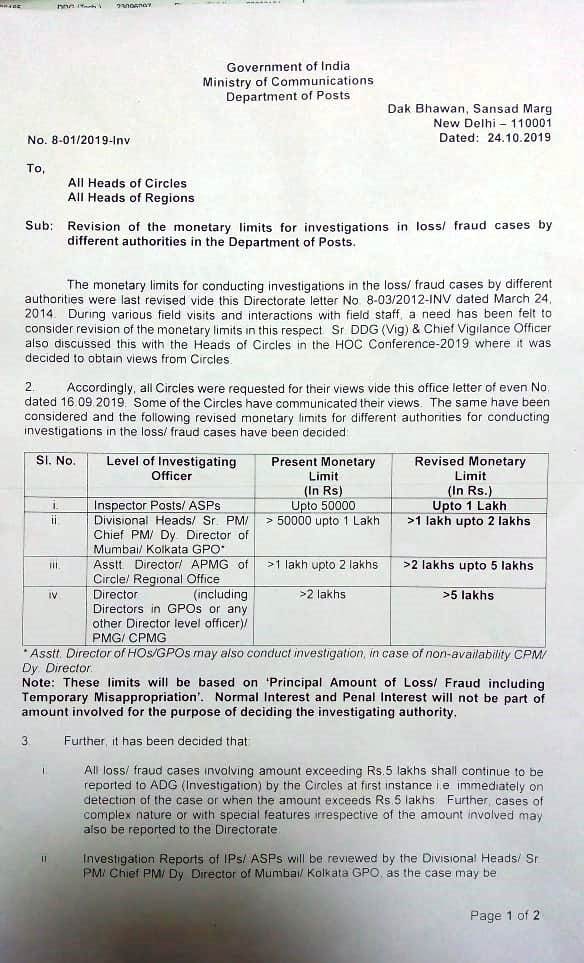 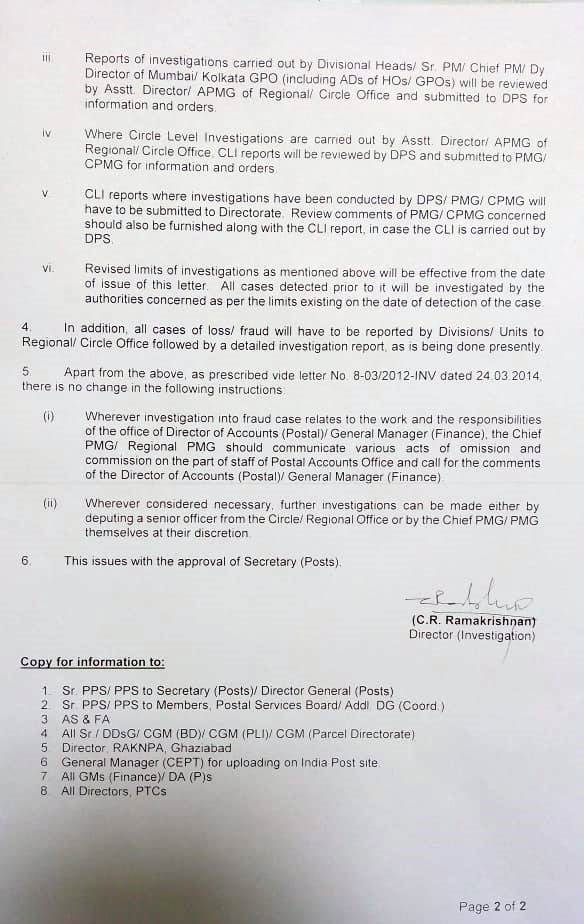 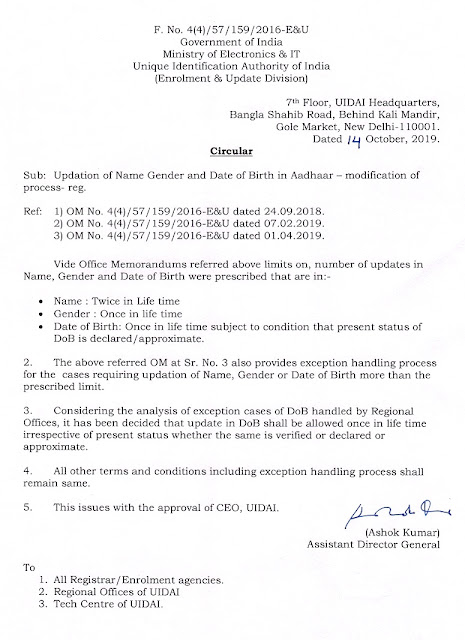 SPECIAL PROVISION FOR ISSUE OF MEDICINES TO SERVING EMPLOYEES VISITING CGHS WELLNESS CENTRE AS A PATIENT - UP TO 09-30 A.M 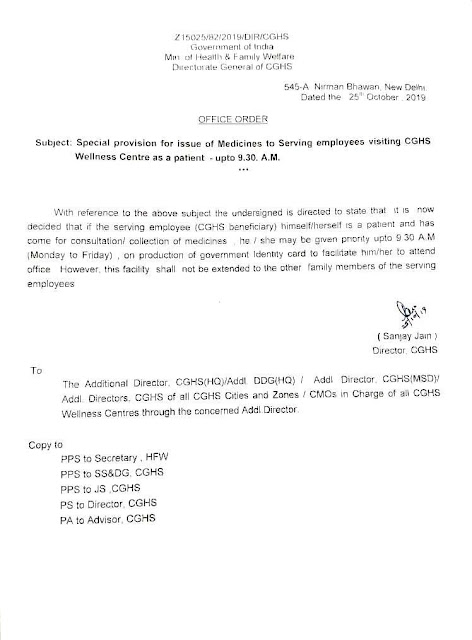 After that Floral tribute was offered to the martyrs. All Leaders present there paid their tribute by offering flowers on Martyr’s Column.

The open session was formally inaugurated by Com. Swadesh Dev Roy, National Secretary, Centre of Indian Trade Unions (C.I.T.U) in his speech he elaborated the issues related to working class, peasantry and common man. How the Government policies are effecting the life of Common man. The neo-liberal economic policies being pursued by the present Government are not in the interest of Common man whether it is Government Employees, Public Sectors Employees, State Government Workers or farmers. These policies have been framed to make the corporate Sector benefitted. The country is facing serious economic crisis and unemployment problem. He appealed the working class to fight unitedly to resist the retrograde economic policies of the Govt.

Shri P. K. Bishoi, Member (Personal) & Designated Secretary (Posts) also graced the occasion as Chief Guest. In his address he assured the employees to protect their interests and settle the problems which are being faced by the employees. He appealed to the Postal Employees to work in the interest of the Department.

Shri K. Nageshwar, Ex-MLC Telangana also delivered his speech and criticized the anti working class policies of present central Govt. He stressed the need to fight unitedly by all working class to resist the anti common man and pro-corporate policies of the Government.

Delegate session was started at 4 PM on 20.10.2019 after getting the agenda approved by the house Com. J. Ramamurthy delivered Presidential Speech.

Com. R. N. Parashar General Secretary initiated the discussion on agenda by narrating the present position on each issue.

All Circle Secretaries discussed the various issues notified in agenda in detail it went on upto 21st October A/N. After that delegates were called for to give their views on agenda items and the problems being faced by them at the ground level. 76 delegates took part in deliberation who gave an important feedback on the issues.

After that General Secretary summed up the discussion. He elaborately described each issue raised by the delegates and clarified the position of action taken by CHQ and the Department. He thanked all Leaders, Member (P) & designated, Secretary (Posts) Chief PMG Telangana and other officers who attended the open session. He thanked all CHQ office bearers, Circle Secretaries, Women Committee members, Divisional Secretaries and all delegates and visitors who attended the A.I.C. for their guidance and co-operation extended to run the affairs of CHQ.

Special Thanks were given to Com. K. V. Sridharan Ex-General Secretary, AIPEU Group ‘C’ who has always extended his support, co-operation and guidance to the CHQ.

After that Credentials were readout. 711 delegates out of 836 were present. All Circle Secretaries and CHQ office bearers were also present. The house was declared duly composed by the President and all business transacted was declared under composed house and approved by the house.

After that agenda items were got approved by the President one by one.

As per agenda election was held and new set of office bearers was elected unanimously which is mentioned as under.

The session was presided by Com. G. Janakiram, Working President.

At last General Secretary thanked the Reception Committee for organizing the A.I.C in a good manner for which Com. S. S. R. A. Prasad, Com. Raj Kumar, Com. Suresh, Com. Ravinder Reddy, Com. Vishwanath and other members deserve the appreciation.

Vote of thanks was given by Com. S. S. R. A. Prasad General Secretary, Reception Committee.

At last President Concluded the A.I.C. by delivering brief speech.
Posted by NFPE at 11:40 AM No comments: