SB ORDER 15/2021: CLARIFICATION ON WITHDRAWAL / CLOSURE OF ACCOUNTS UNDER NATIONAL SAVINGS SCHEMES - REGARDING 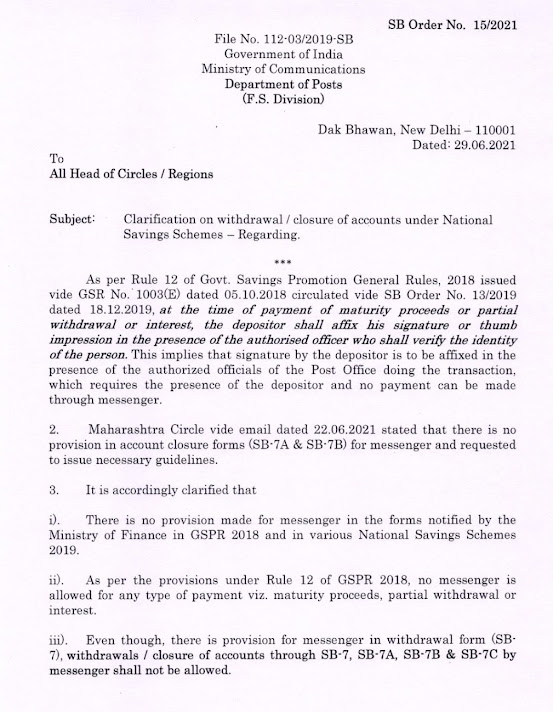 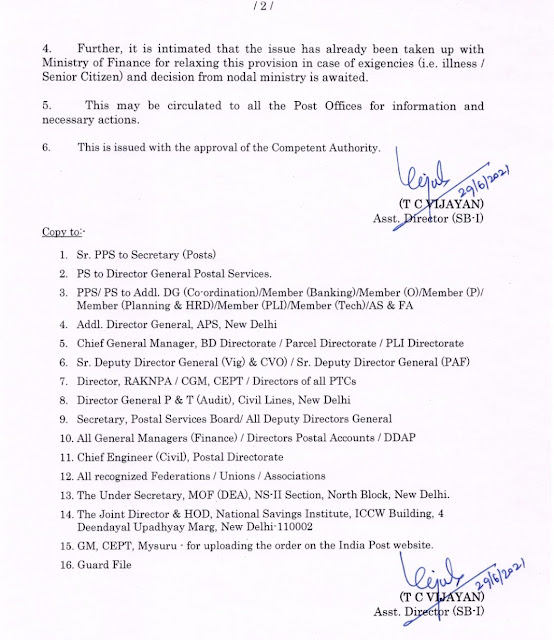 Ministry of Health and Family Welfare

Vaccines and COVID Appropriate Behaviour can help us fight the pandemic. Secretary, Department of Biotechnology; Director General, Indian Council of Medical Research; and Director, National Centre for Disease Control have answered many questions about the Delta and Delta Plus variants of the SARS-Cov-2 virus. PIB has curated the answers, given at a COVID Media Briefing held by the Health Ministry on June 25, 2021.

Q. Why does a virus mutate?

Virus by its very nature mutates. It is part of its evolution. The SARS-Cov-2 virus is a single-stranded RNA virus. So, changes in the genetic sequence of the RNA are mutations. The moment a virus enters its host cell or a susceptible body, it starts replicating. When the spread of infection increases, the rate of replication also increases. A virus that has got a mutation in it is known as a variant.

Q. What is the impact of mutations?

The normal process of mutations begins to impact us when it leads to changes in transmission levels or on treatment. Mutations can have positive, negative or neutral effects on human health.

Negative impacts include clustering of infections, increased transmissibility, ability to escape immunity and infect someone who has prior immunity, neutralization escape from monoclonal antibodies, improved binding to lung cells and increased severity of infection.

Positive impacts can be that the virus becomes non-viable.

Q. Why are frequent mutations seen in SARS-CoV-2 virus? When will the mutations stop? SARS-CoV-2 can mutate due to the following reasons:

·         Random error during replication of virus

·         Immune pressure faced by viruses after treatments such as convalescent plasma, vaccination or monoclonal antibodies (antibodies produced by a single clone of cells with identical antibody molecules)

·         Uninterrupted transmission due to lack of COVID-appropriate behaviour. Here the virus finds excellent host to grow and becomes more fit and more transmissible.

The virus will continue to mutate as long as the pandemic remains. This makes it all the more crucial to follow COVID appropriate behavior.

When the mutations happen – if there is any previous association with any other similar variant which is felt to have an impact on public health – then it becomes a Variant under Investigation.

Once genetic markers are identified which can have association with receptor binding domain or which have an implication on antibodies or neutralizing assays, we start calling them as Variants of Interest.

The moment we get evidence for increased transmission through field-site and clinical correlations, it becomes a Variant of Concern. Variants of concern are those that have one or more of the following characteristics:

The 1st Variant of Concern was announced by the UK where it was found. Currently there are four variants of concern identified by the scientists - Alpha, Beta, Gamma and Delta.

Q. What are Delta and Delta Plus variants?

It is the Indian scientists who identified the Delta Variant and submitted it to the global database. Delta variant is classified as a Variant of Concern and has now spread to 80 countries, as per WHO.

The Delta Plus variant has been classified as Variant of Concern because of the following characteristics:

Q. How often are these mutations studied in India?

Indian SARS-CoV-2 Genomics Consortium (INSACOG) coordinated by the Department of Biotechnology (DBT) along with Union Health Ministry, ICMR, and CSIR monitor the genomic variations in the SARS-CoV-2 on a regular basis through a pan India multi-laboratory network. It was set up with 10 National Labs in December 2020 and has been expanded to 28 labs and 300 sentinel sites from where genomic samples are collected. The INSACOG hospital network looks at samples and informs INSACOG about the severity, clinical correlation, breakthrough infections and re-infections.

Q. On what basis are the samples subjected to Genome Sequencing?

1) International passengers (during the beginning of the Pandemic)

When there is any public health impact noticed because of genetic mutation, then the same is monitored.

Q. What is the trend of Variants of Concern circulating in India?

As per the latest data, 90% of samples tested have been found to have Delta Variants (B.1.617). However, B.1.1.7 strain which was the most prevalent variant in India in the initial days of the pandemic has decreased.

Q. Why public health action is not taken immediately after noticing mutations in virus? It is not possible to say whether the mutations noticed will increase transmission. Also, until there is scientific evidence that proves a correlation between rising number of cases and variant proportion, we cannot confirm there is a surge in the particular variant. Once mutations are found, analysis is made week on week to find if there is any such correlation between the surge of cases and variant proportion. Public health action can be taken only after scientific proofs for such correlation are available.

Once such correlation is established, this will help greatly to prepare in advance when such variant is seen in another area/region.

Q. Do COVISHIELD and COVAXIN work against the variants of SARS-CoV-2?

Yes, COVISHIELD and COVAXIN are both effective against the Alpha, Beta, Gamma and Delta variants. Lab tests to check vaccine effectiveness on Delta Plus Variant are ongoing.

Delta Plus Variants: The virus has been isolated and is being cultured now at ICMR’s National Institute of Virology, Pune. Laboratory tests to check vaccine effectiveness are ongoing and the results will be available in 7 to 10 days. This will be the first result in the world.

Q. What are the public health interventions being carried out to tackle these variants?

The public health interventions needed are the same, irrespective of the variants. The following measures are being taken:

No, public health prevention strategies do not change with variants.

Q. Why is continuous monitoring of mutations important?

Q. What does a common man do to protect him/her from these Variants of Concern?

The second wave is not over yet. It is possible to prevent a big third wave provided individuals and society practise protective behaviour.

Further, Test Positivity Rate must be closely monitored by each district. If the test positivity goes above 5%, strict restrictions must be imposed.

TRANSFER OF ACCOUNTS BELONGING TO DISCONTINUED SCHEMES I.E. NSS-87 & NSS-92 IN CBS POST OFFICES    (CLICK THE LINK BELOW TO VIEW)

BRIEF OF THE 48TH MEETING OF THE NC-JCM 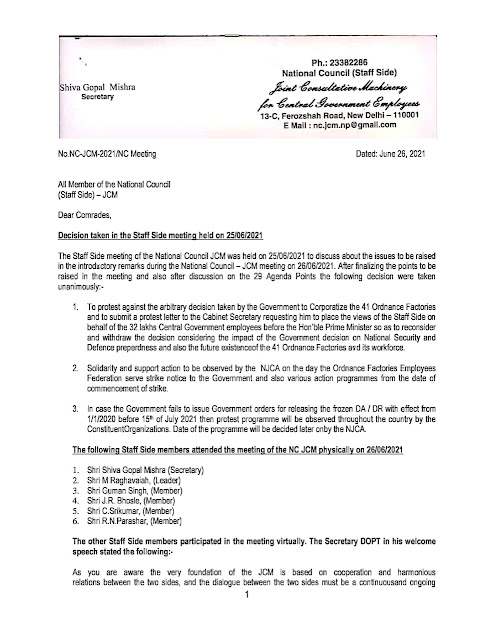 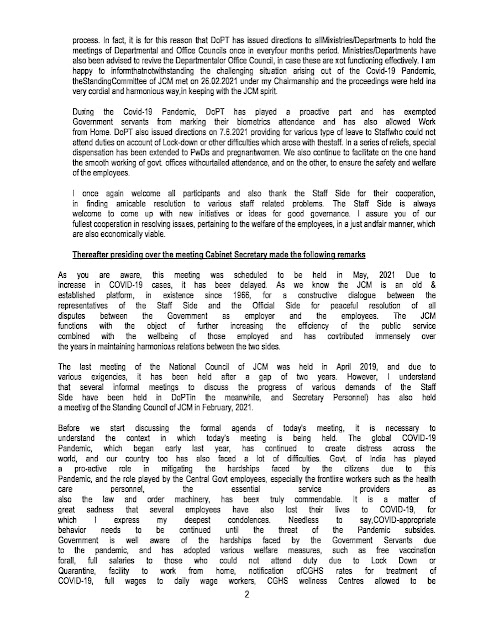 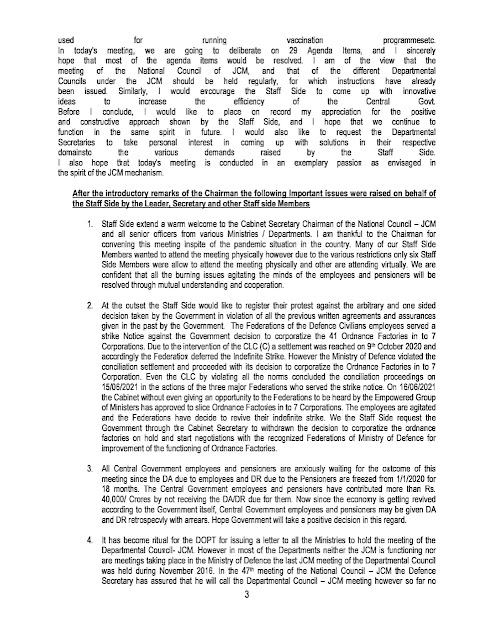 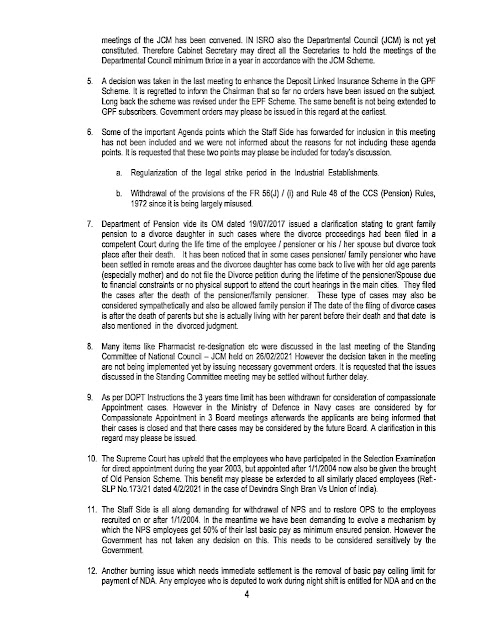 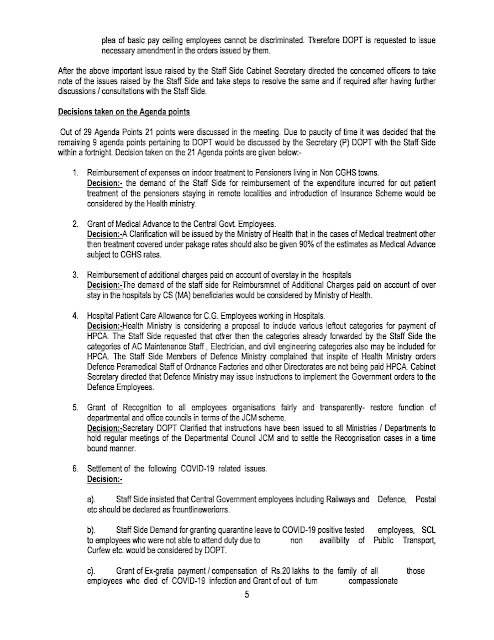 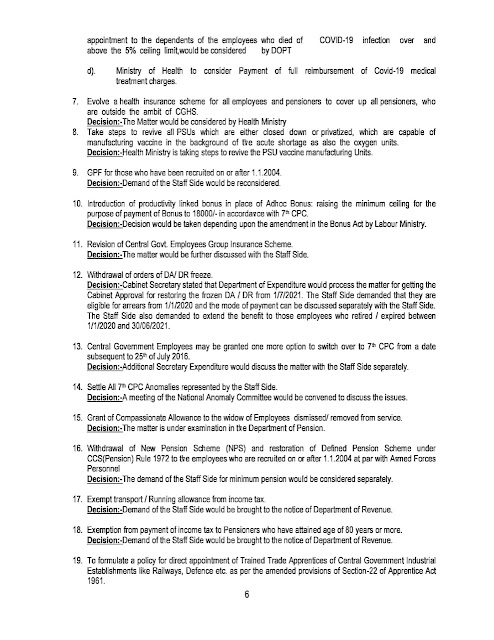 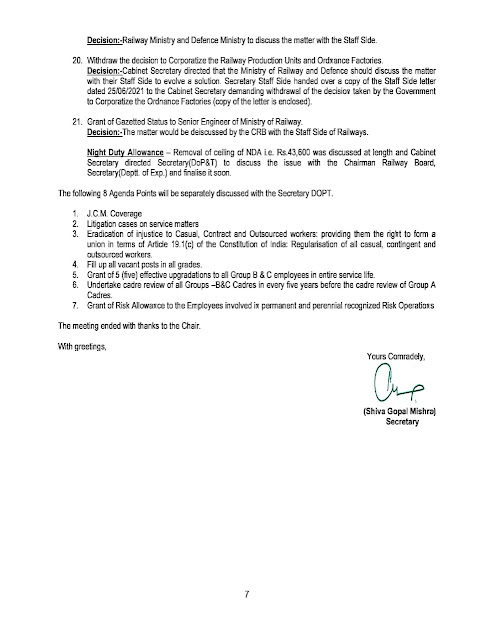 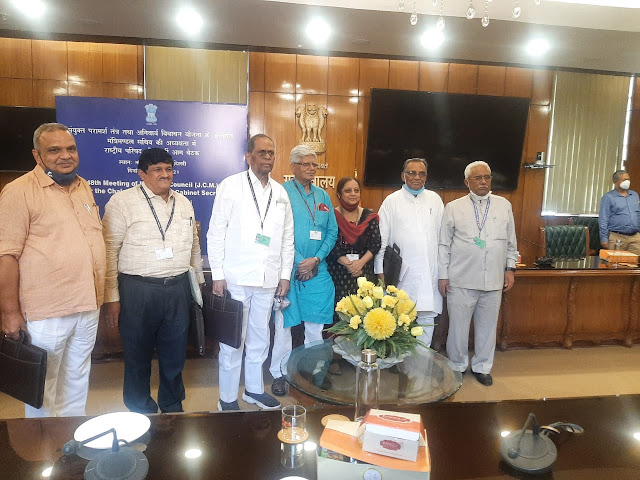 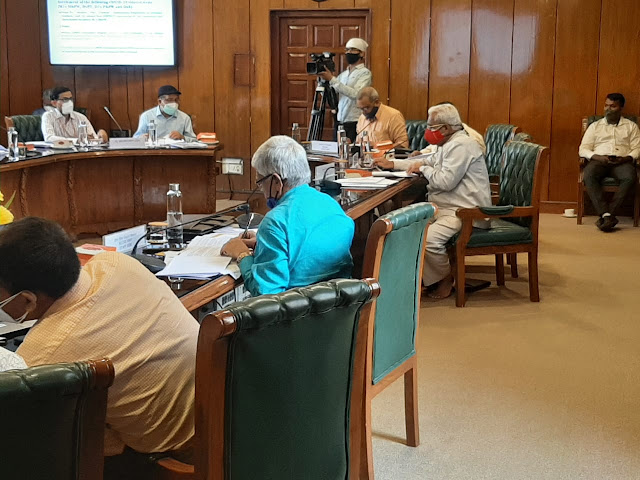 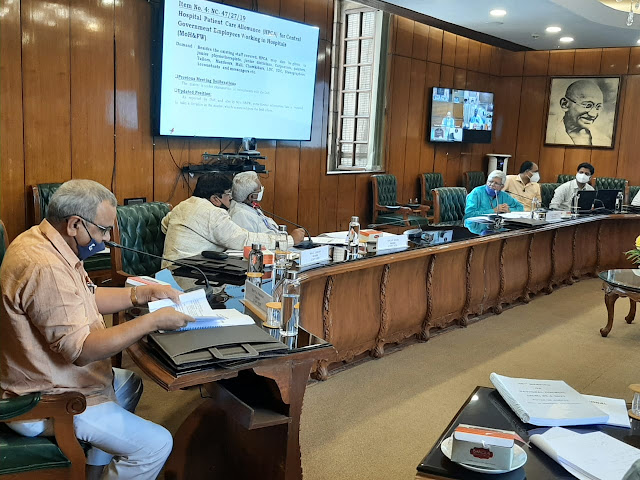 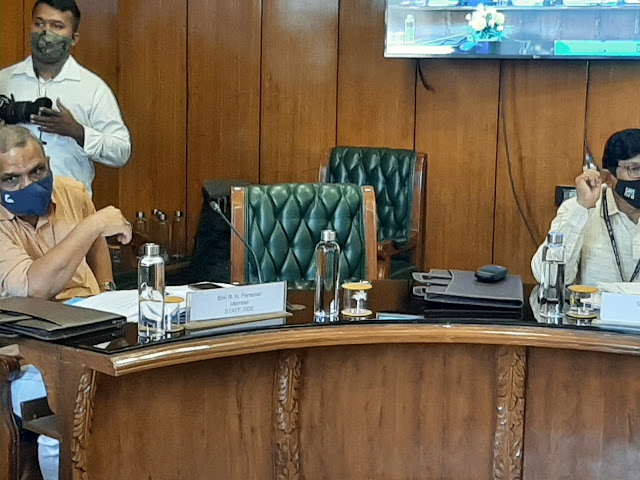 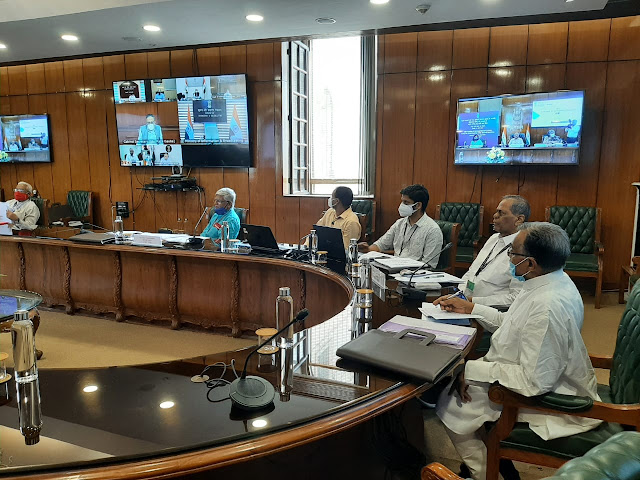 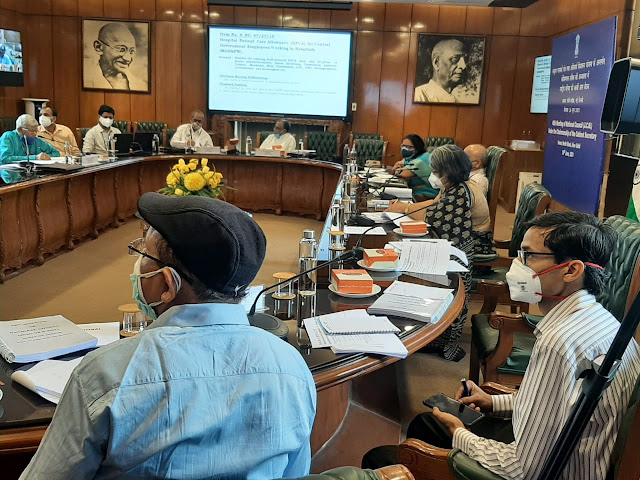 The Government has granted further extension of timelines of compliances under Income Tax Act. It has also announced tax exemption for expenditure on COVID-19 treatment and ex-gratia received on death due to COVID-19. The details are as follows:

Necessary legislative amendments for the above decisions shall be proposed in due course of time.

In view of the impact of the Covid-19 pandemic, taxpayers are facing inconvenience in meeting certain tax compliances and also in filing response to various notices. In order to ease compliances to be made by taxpayers during this difficult time, reliefs are being provided through Notifications nos. 74/2021 & 75/2021 dated 25th June, 2021 Circular no. 12/2021 dated 25th June, 2021. These reliefs are:

GRANT OF BENEFIT OF ONE NOTIONAL INCREMENT (AS DUE ON 1ST JULY) FOR THE PENSIONARY BENEFITS TO THOSE EMPLOYEES WHO HAD RETIRES ON 30TH OF JUNE BEFORE DRAWING THE SAME.

DELAY IN SUBMISSIONS OF PROPOSALS FOR INSTITUTING DISCIPLINARY PROCEEDINGS UNDER RULE 9 OF THE CCS (PENSION), RULES, 1972