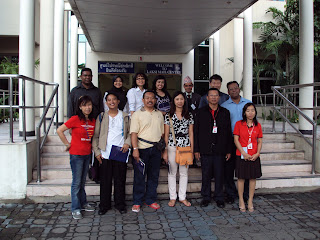 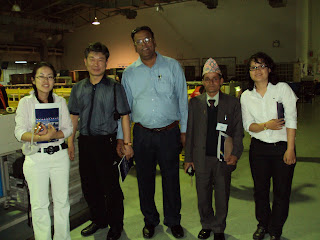 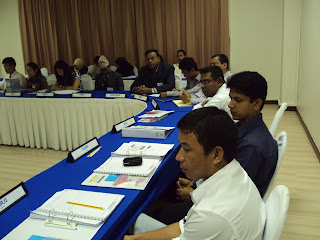 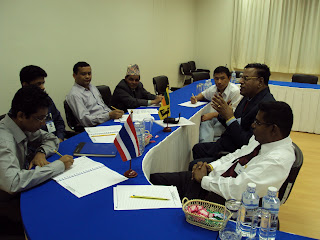 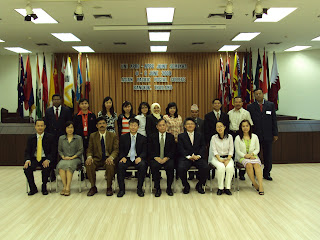 Union Network International - Asia Pacific Regional Organisation sponsored Internal Seminars
UNI - Apro sponsored International Seminars were organised in Thailand and Comrade K.V.Sridharan General Secretary AIPEU Group 'C' has attended on behalf of NFPE. Consequent on our decision to join UNI-Apro as an affiliate, relations are being strengthened between our Federation and the UNI. The experiences of Comrade KVS on his participating in these Seminars in Thailand are well explained by him through his write up as follows:
P-3 GENERAL SECRETARY’S PARTICIPATION IN UNI APRO SEMINARS

The General Secretary Com. K. V. Sridharan has attended the Union Network International – Asia Pacific Regional Organization (UNI – APRO) sponsored seminars on Posts & logistics held at Bangkok and Ayottaya as a representative of NFPE on the invitation. The Seminars were held at Bangkok on 08.06.09 & 09.06.09 and at Ayottaya from 10.06.09 to 11.06.09. The delegates from India, Indonesia, Korea, Singapore, Nepal, Phillipines, Vietnam. Srilanka and Vietnam. The members of the UNI Secretariat, Japan also participated.

On 08.06.09, the Joint Seminar organized by UNI APRO Post & Logistics & Appear began with the inaugural address of Mr. Somchai Reopanichkul Director, APPU Bureau who dealt elaborately about the international Dimension of Post and the need for better understanding between the manager of Postal Services with the Trade Union representatives. Mr. Chandrasekear, Director of India Post on deputation at APPC which in the training centre for Postal Managers under APPU has dealt the subject of Changing Scenario of Postal business and the ‘Business Excellence, In the after noon he explained about the mail parcel & logistics management.

There was a group discussions of participants alongwith the Managers, IT personnel of various countries deputed to APP college for training etc on the subject of how to make the Post profitable under the Economic crisis. It lasted for two hours and Mr. Chandra & Mr. Wasim, Lecturers of APPU College hold the discussions and made the Seminar as useful and purposeful.

The Participants of the Seminar visited the Laksi Mail Centre Bangkok in the evening to know about their Sorting and the logistic services.

On 09.06.09, Mr. Lim, Profesional Experts on Postal Services has dealt about the reforms in Korea Post. Thereafter Mr. Wasim, lecturer of APPC covered both the topics of operational Excellence & Human resource management elaborately which was very useful to know about the services of various countries in the region. The details collected during group discussions, interactions, with the participants are furnished in this issue for the academic interest of all.

On 10.06.09, the participants moved to Ayotthaya, the former capital of Thailand and around 70 Kms away from Bangkok to take part in the UNI Apro Posts & Logistics/SEWU – THP Joint seminar which was also sponsored by UNI Japan Post. Morethan 25 Union members of SEWU- THP and UNI – TLC officials participated the Seminar. The debates on ‘Economic Crisis and Labour Movement in Thailand and the lecture of Prof. Lac Dilokvidhyarat, Faculty of Economis. Chulalangkorn University of Thailand was note worthy. In the after noon Br. Rah Joon-hwan, Coordinator for sector & Research Activities. UNI APRO has delat the topic of ‘Economic Crisis impact on UNI affiliates and Postal Business in Asean.

Thereafter, the participants were divided in to regional groups (Assam, East Asia, South Asia & Thailand) and discussed to make presentations on ‘What the impacts of Economic crisis on Post & Logistic services & How can post & Logistics services tackle with the Economic crisis) on behalf of India, Nepal & Sri Lanka forming the South Asian Contingent, General Secretary Com. K. V. Sridharan made the presentation.

On 11.06.2009 morning the Representation of Thailand Post explained about the improvement on Postal logistic Services and its three fold expansion within six years. Interactions revealed many facts about the Thailand Posts.
In the afternoon, the representatives were presented their group discussions on the topic and it was the unique experience to present our strong views to keep the Postal as Government Service in the midst of many advocates of privatization, corporatization policies.

On 11.06.09, Broter Eiichi, ITO Directorate of UNI Apro Post & logistics participated in the farewell dinner and exchanged the views of the UNI with all participants on all issues. The devises of sister Yoko Marikawa, Staff of UNI Apro Tokyo office is simply superb and ever rememebrable.

The participation of the seminars is no doubt very purposeful to exchange the views of other countries participants and to know about their services and the role of Postal Trade Unions in protecting the interest of the their workers.

OUR OBSERVATIONS ABOUT THE FUNCTIONS OF POST OFFICES IN OTHER COUNTRIES

INDONESIA
Postal Service has been corporatized since 20 June 1995. It is being considered for privatization in 2010. However 100% share still belongs to Government. Monopoly of letters is retained upto 500 grams. Ministry of Information of Communication is the regulatory authority. Same Day delivery & Next Day delivery (D+O & D+I) is in existence. During 2008, it was having the net loss to the extent of IDR 57.90 billions.

PHILIPPINES
The Postal is corporatized on 03.04.1992 and now it is included in the privatization list of Government offices/agencies. It operates 60% and the private couriers are controlling 40% of remaining traffic. The employees of the Phil Post are treated as civil servants enjoying all benefits, rights and privileges like other Government employees. In the total work force, 88% are rank & file employees and 12% are supervisors & managers. Commission on Information and communication Technology (CKT) is the main regulator of Phil Post. The basic standard of delivery is prescribed as D+1 for local & intra region mails and D+3 for inter – regional mails.

SINGAPORE
The Service is corporatized since 2003 and further liberalized from 01.04.2007. The monopoly of delivery has been reserved for the articles weighting 500gms and below for domestic & international mails. Singpost is designated as Public Postal Licensee and the Info – Communications Development Authority of Singapore will be the regulator of Singpost. It was having the revenue of 5 $ 472.6 Million and operating profit of $ 175.3 M for the financial year ending 31.03.2008. 99% mails are delivery by next working day within & outside CBD areas.

THAILAND
It is corporatized during 2003 under the name of Thailand Post Co. Ltd. Privatization is under consideration. Now Thai Government is 100% share holder and it is a State owned enterprise. It is under the Ministry of Information & Communication technology. Thai Post is the monopoly in communication market in respect of letters and Post cards. After corporatization it has 300% revenue increase and more profits in logistic services. The standard of delivery stipulated as D+1 for local, Regional to regional D+2. Allowance for child Birth is the new area introduced to the employees and as of the fringe benefits.

VIETNAM
Postal Service of Vietnam is corporatized during 1990. There is no consideration for its privatization. Vietnam Post works under the Law on companies & Ministry of Information & Communication is the regulator of Postal Services. However the Vietnam Post allows private agents to deliver Postal articles to end-users throughout the country. This is having only 50% market only. The remaining traffic are handled by Viettel & Saigon Post Private operators. Under the Law, Vietnam Post has to pay a part of its income to the state. The Government also facilitates financial assistance (as soft loans) for infrastructure and for the favourable policies to the Vietnam Post.

Basic standard for delivery is D+1 for local & D+2 for others. Rewards on the Occasion of Festivals, New Year, cash prizes for increase in the production are the two new areas in respect of fringe benefits to its employees.

NEPAL
There is a proposal for corporatization of Postal Services. Now it is a Government department. The Expenditure for last financial year was 86, 25, 73, 675 whereas the revenue stands as 23,10,50,729. The Postal workers have no additional holidays. However they are receiving one month extra salary per year. The Extra Departmental Employees are the most exploited labour with lesser pay equal to Rs.1000/- to 1500/- per month without any other benefits.

SRI LANKA
It is the Government owned Department and there is no proposal for privatization or Corporatization. For letter mails, Postal Service is retaining the total monopoly. Total income $ 39.82 (Million) Expenditure $ 62.76 & Deficit $ 22.94 & (Million).

SOME INTERESTING INFORMATIONS – WITHOUT COMMENTS

v Thailand Post is not recruiting any workers over three years. Temporary workers sponspored by private companies are being engaged for two months and thereafter by subsequent renewals for same periods of two months. More Temporary employees are now in the rolls.

v Sri Lanka Postal Service is launching its own telegraph service to compete with the Sri Lanka Telecom. Both are Government departments.

v As a National Policy, Sri Lanka Government announced that the Postal Service is a State Service and there will not be any corporatization or privatization.

v Rationalization plan in philiphines starts in October 2009 and 2000 employees will be effected by retrenchment or voluntary retirement. This is due to recession of economic policy.

v Thailand Post outsourced the Track & Trace System. For each transaction, money is disbursed to the companies.

v In Pakistan, for recruitment of Postman, a running test will be conducted among the candidates and one has to run 1 Km. within six minutes. Similarly he should possess a motor cycle licence.

v ‘Post Foundations’ was formed during 1981 by Postal pensioners in Pakistan. Now this is the biggest organization than postal and deals printing, Steels, Fabrications, Furnitures, wools etc. it started it function by supplying uniforms to Army and Furniture to schools.

v The Post Foundation of Pakistan provided jobs to the wards of the Postal employees to the extent of 45%. It provided free housing to the Postal officials; Old age pension to discharged ED Agents.

v The Extra Departmental Employees of Pakistan are being paid Rs.2000/- per month. No leave; No medical; No pension; No civil status; No DA. It is only the consolidated amount. The EDAs may opt to for to work commission basis at the same Bo by quitting from the post if it is advantageous.

v Thailand post has outsourced its transport. The vehicles being used by the contractors should not be more than 7 years old. But in Philippines, the departmental vehicles are used and managed on their own. Sri Lanka is planning to ply more public services on its own.

v In Korea Post, there is no recruitment over two years. The workers are engaged on contract basis.

v In Pakistan, the Post was corporatized during 1992. Business went down. There was huge expenditure after corporatization. It was brought back as Government Service during 1996. Six to seven months, the postmen were asked to work for 4 hours on Government duty for half pay and remaining period in private job. Ban on creation of posts is continuing in Pakistan over ten years.

v In the survey conducted on health hazard to postmen, it was found that 16% postmen are suffering with tuberculosis; 12% Hepatitis B, 7% Hepatitis C, 16% throat problems. Therefore Postal Foundation is providing one glass of milk in the morning and one glass lemon juice in the evening to all postmen.

v In Pakistan, providing security guards, work related to conveyance of cash and upkeep of office were outsourced in the Postal department.

In the process of workforce planning, to reduce the labour supply, ‘inducement to quit’ is one of the option (i.e.) making the employees to fed up due to overwork or bad environment and make them to decide quitting the organization.

Thanks for publishing your observations in foreign countries.I am really happy and request you kindly to publish such type of information in forthcoming blogs.