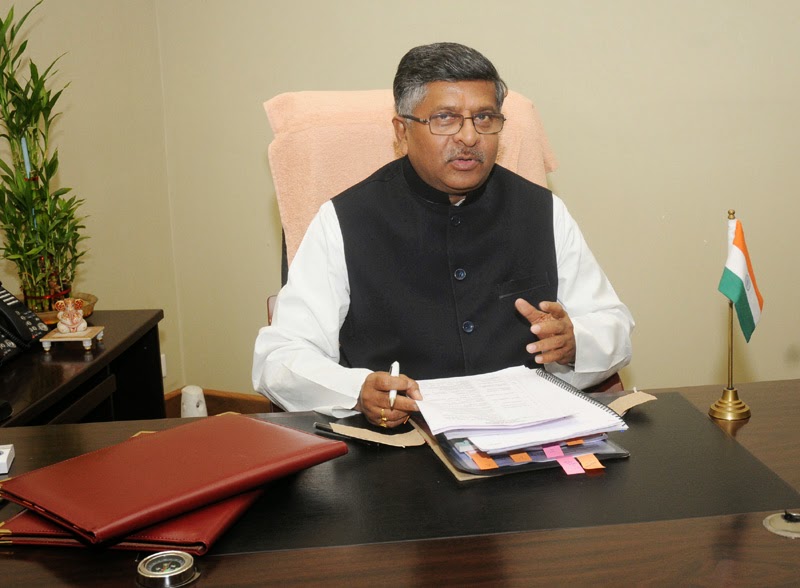 CLICKHERE TO VIEW in Pdf FILE
Posted by NFPE at 9:26 PM No comments:


Draft Memorandums of other affilliates of NFPE will be published later.
Posted by NFPE at 5:24 PM No comments:

An All India workshop and Seminar on 7th Central Pay Commission Memorandum P3 related issues was organised on 26th & 27th May 2014 at Shah Auditorium, Delhi, by the AIPEU Group ‘C’ (CHQ). It was a grand success and served its purpose. About 277 delegates mainly Branch/Divisional/Circle Secretaries from all Circles (except Punjab) and CWC members attended the camp. The draft Memorandum prepared by the AIPEU Group ‘C’ (CHQ) with the help and guidance of Com. K. V. Sridharan, Ex-General Secretary was supplied to all delegates. About 45 delegates actively participated in the deliberation and many more gave suggestions in writing.

Key Note address in the Seminar on the subject – “7th CPC Memorandum-P3 related issues” was delivered by Chief Guest Shri. Alok Saxena, DDG (PMU) and Secretary to Postal Services Board, having vast experience of working in DoP&T and as Director in 6th CPC and also as Director, Implementation in Ministry of Finance. In his highly appreciated speech he narrated the principles of pay fixation and also various factors relating to Pay Commission. He made it clear that the PA cadre and its promotional cadres and allied cadres deserve a higher pay scale and endorsed the demands raised by P3 CHQ in the draft Memorandum as reasonable and justified.

Com. M. Krishnan, General Secretary, AIPEU Group ‘C’ (CHQ) & Secretary General, NFPE & Confederation presented the draft memorandum by reading each chapter, followed by discussion. He replied all the points raised in the deliberations by the delegates.

Eligibility of officers to be considered for promotion by DPC- Fixing of Crucial Date - Regarding. 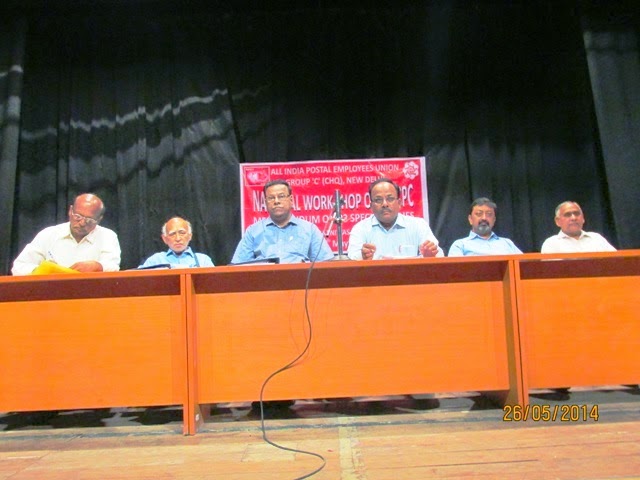 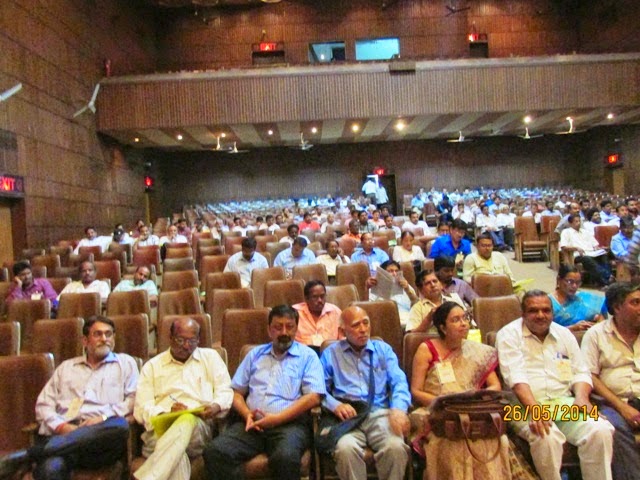 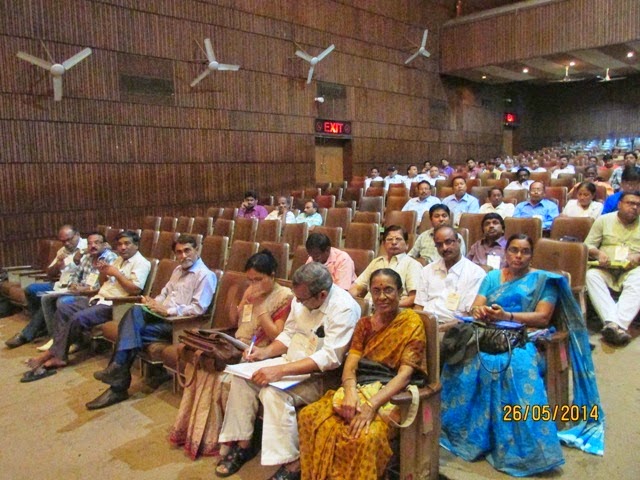 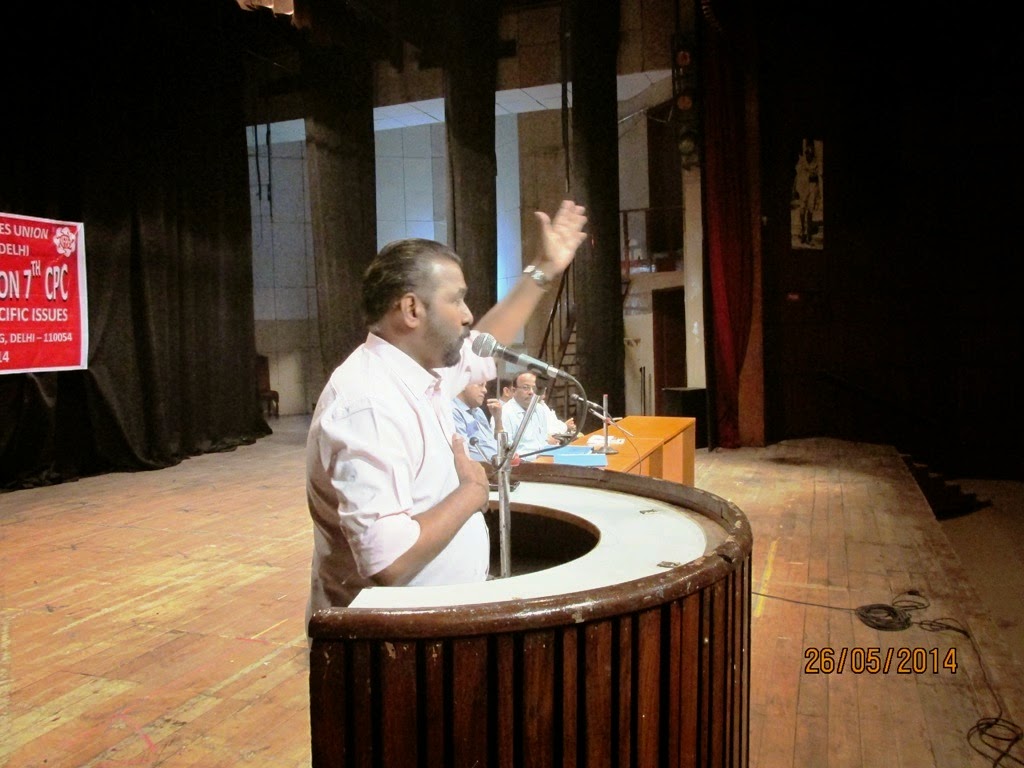 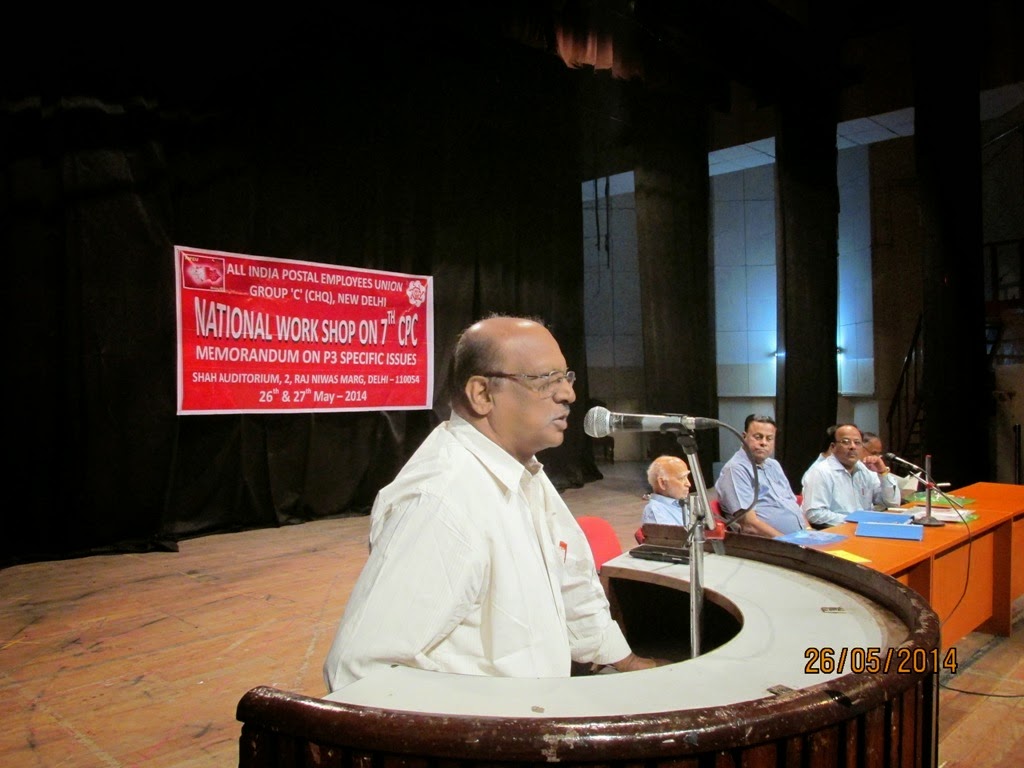 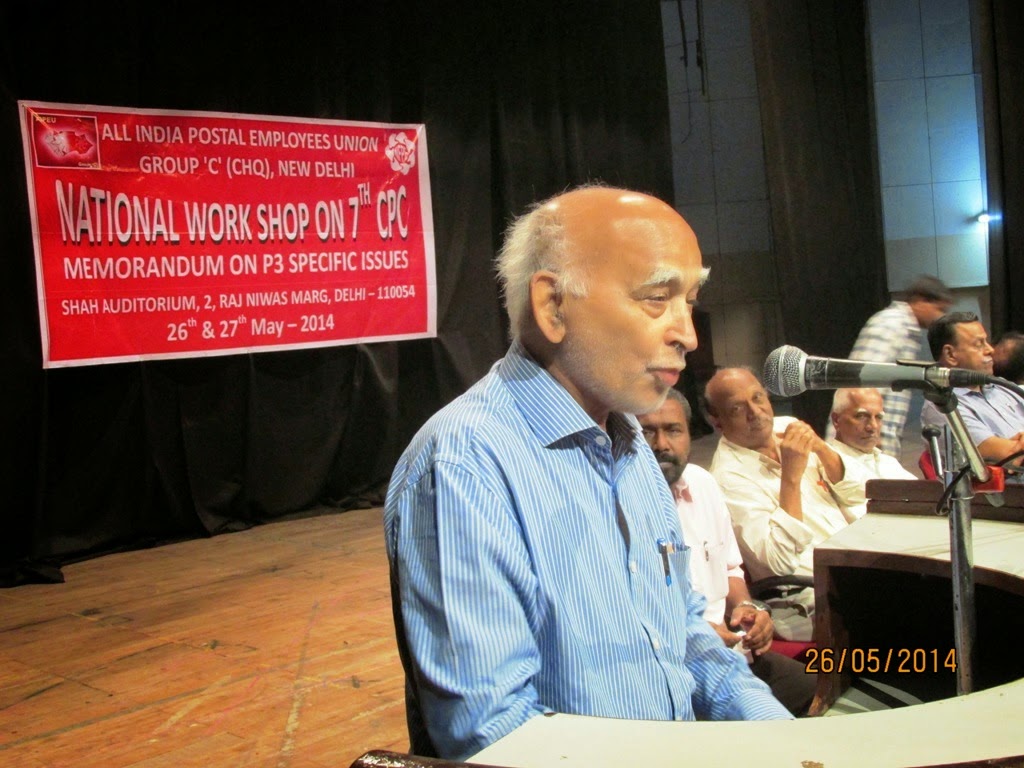 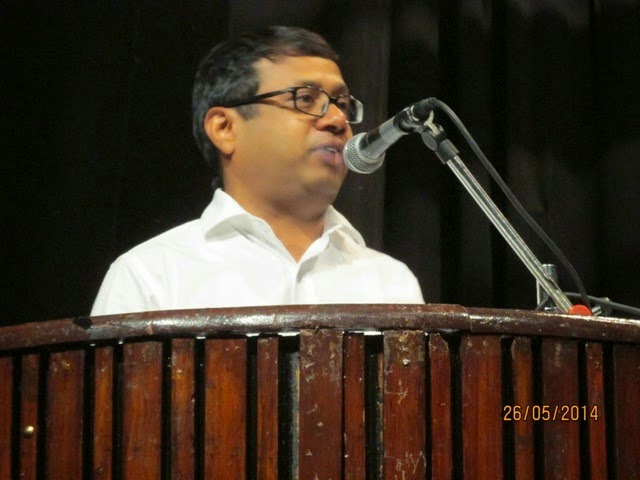 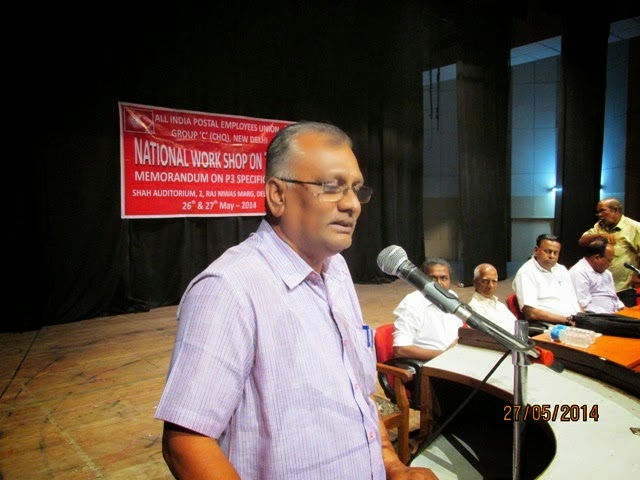 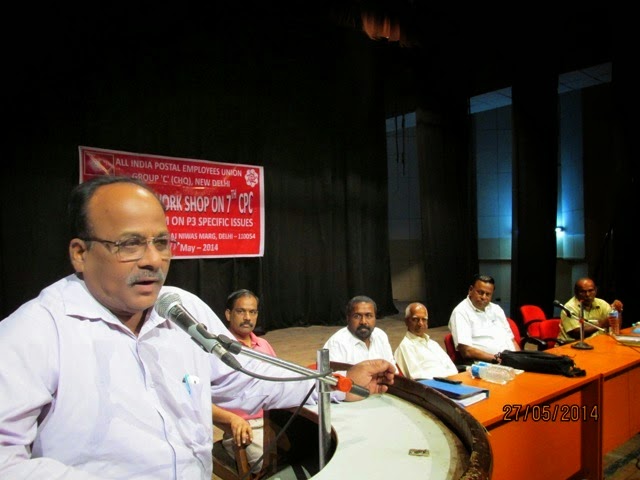 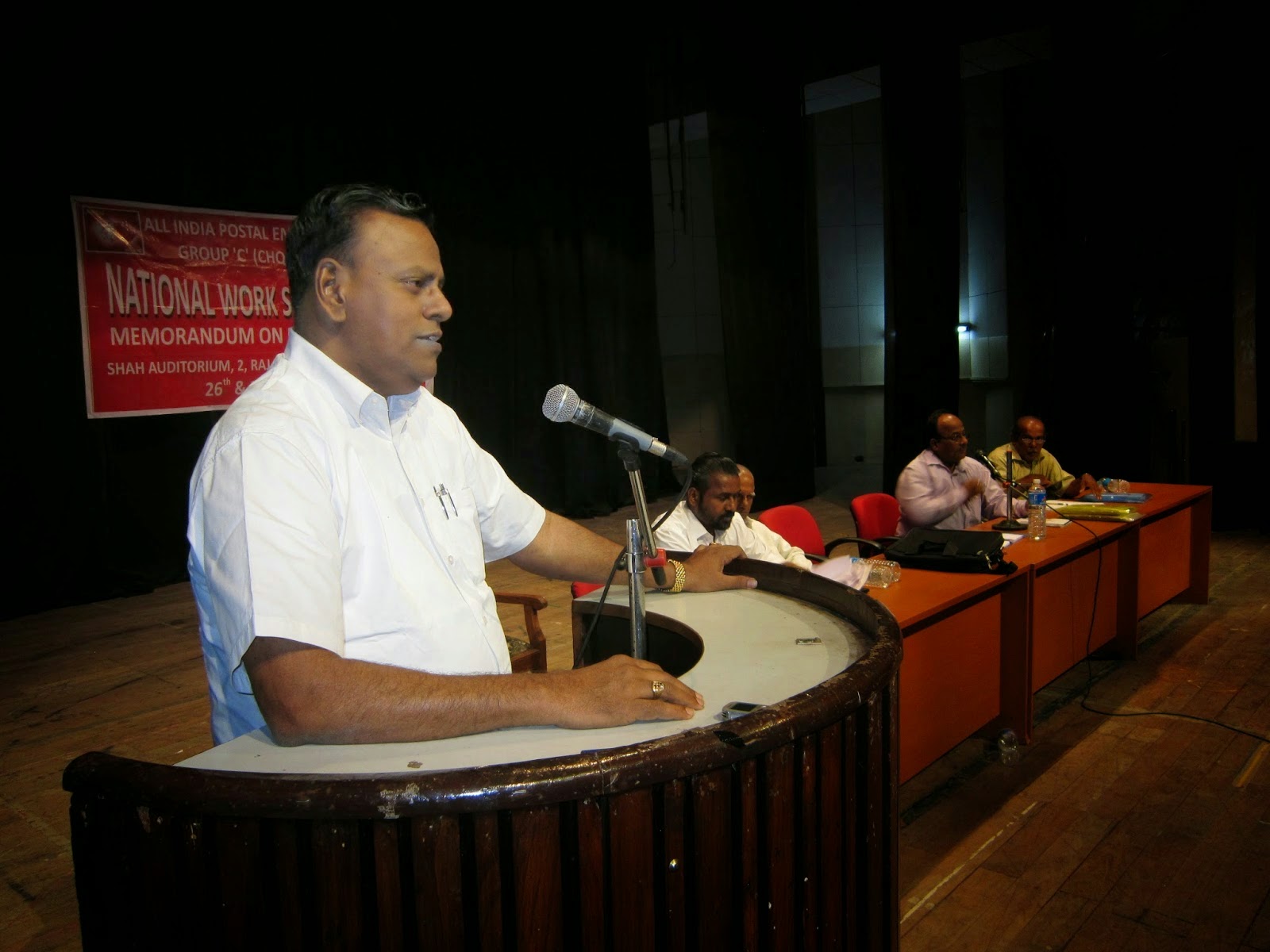 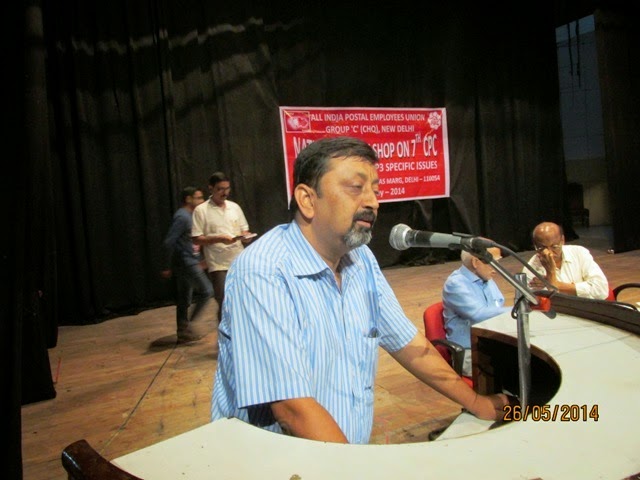 CLICK HERE
Posted by NFPE at 11:26 AM No comments:

LAST DATE FOR SUBMISSION OF MEMORANDUM TO 7TH CPC EXTENDED

As per the request of the JCM National Council Staff side, 7th Central Pay Commission has granted extension of time upto 15.07.2014 (15th July 2014) for submission of memorandum by individual organizations other than JCM staff side. The following is the revised time schedule (Last date).

JCM National Council Staff side will be submitting a common memorandum before 30.06.2014 on the common demands of the Central Government Employees. The Copy of the JCM Staff side memorandum will be placed in the website.

All affiliated organizations of the Confederation are requested to prepare their sectional memorandum well in advance and be ready to submit it before 15.07.2014 to the 7th CPC. New Pay scales demanded by the JCM Staff side will be available in the common memorandum of the JCM Staff side.

(M. Krishnan)
Secretary General
Confederation
Posted by NFPE at 11:09 AM No comments:

GRANT OF SPECIAL CASUAL LEAVE TO OFFICE BEARERS FOR ATTENDING THE MEETING OF THE FEDERAL EXECUTIVE OF NATIONAL FEDERATION OF POSTAL EMPLOYEES ON 1st JUNE 2014 AT DELHI. 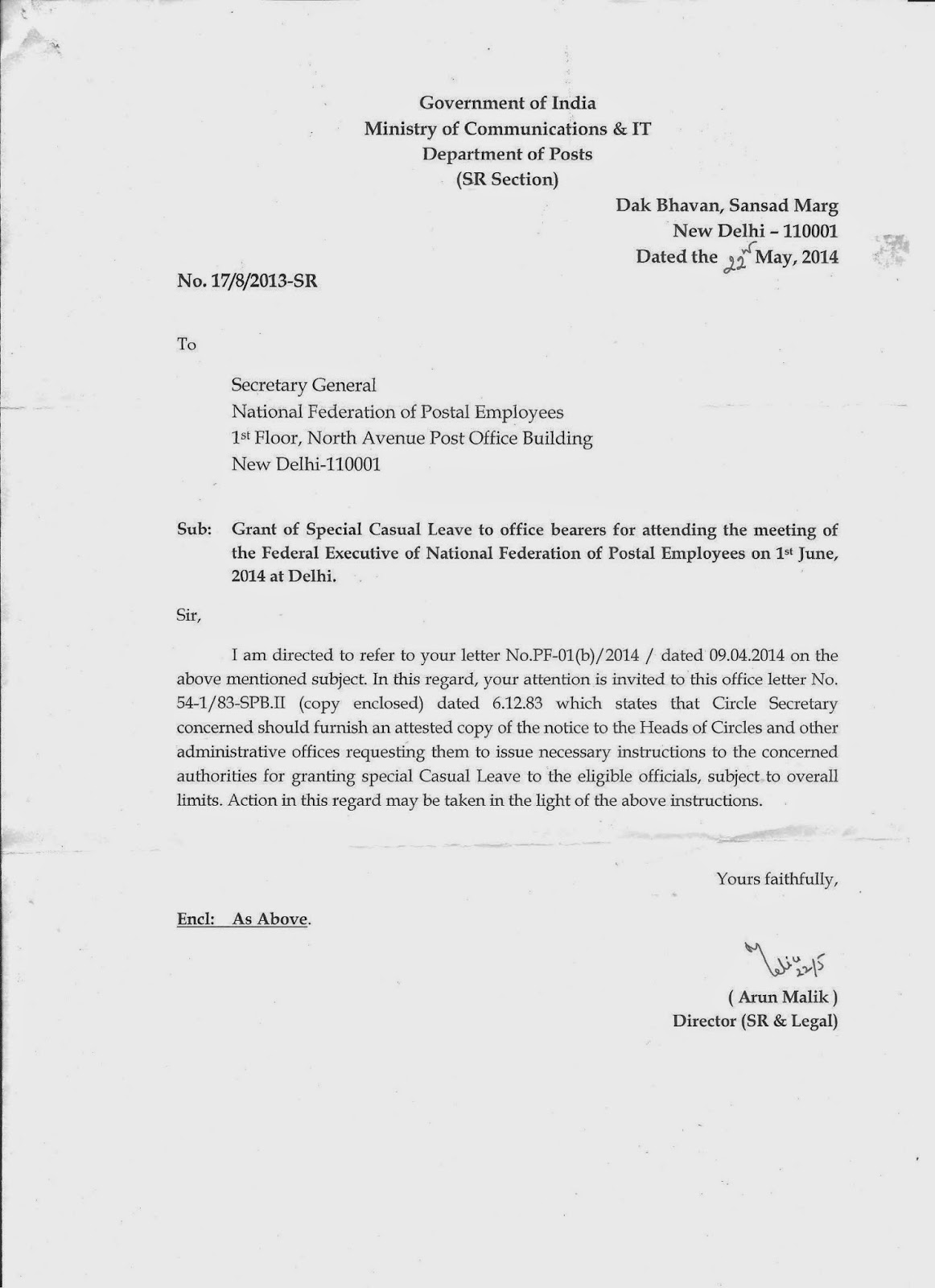 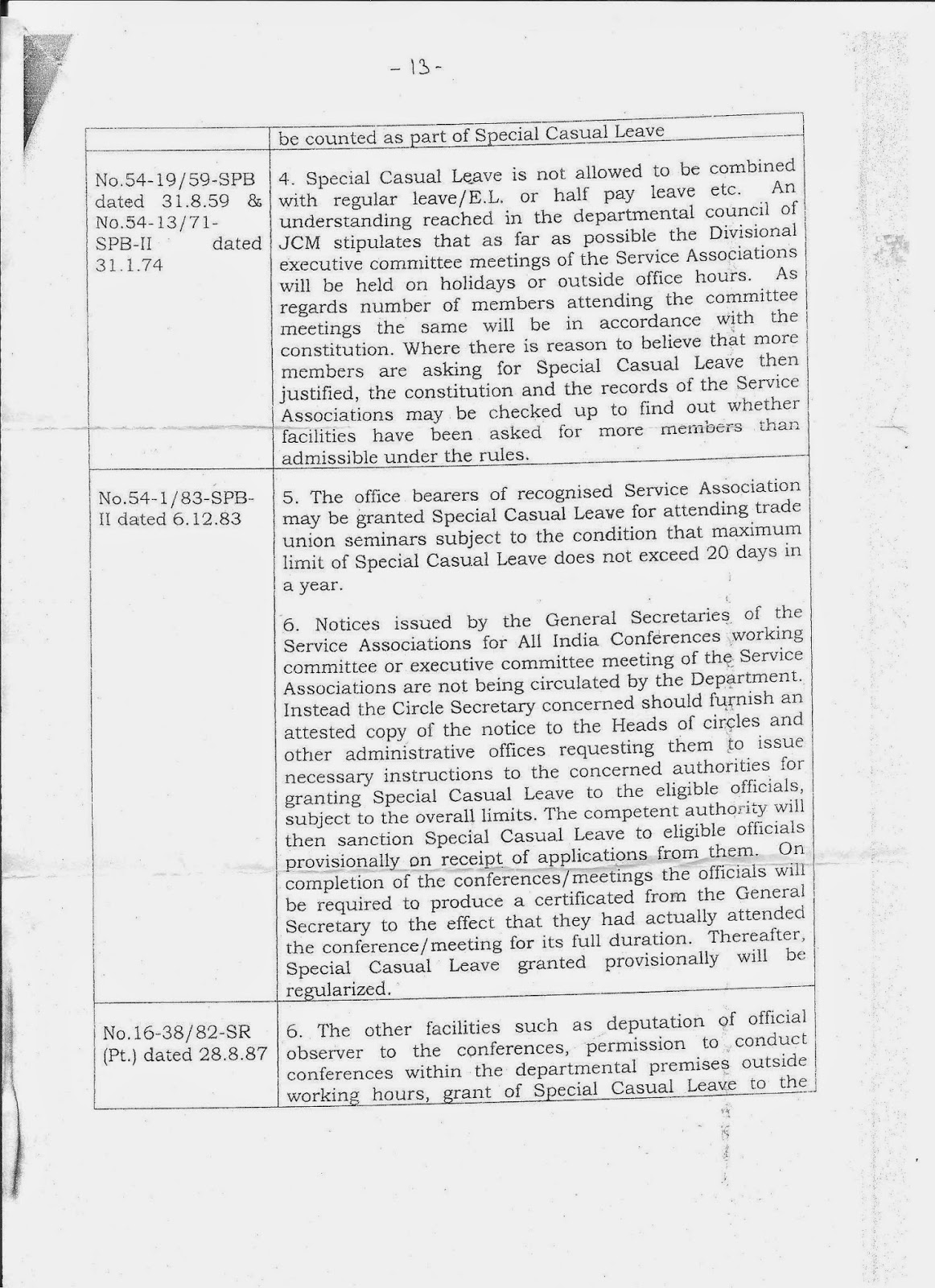 "A parcel wrapped with cloth should invariably either be packed in a carton or be covered with paper or plastic wrapper over the cloth wrapping so that the bar code sticker can be properly affixed on the parcel for track and trace purpose”.


To view the Gazette notification ,  CLICK HERE
Posted by NFPE at 3:45 PM No comments:

DIRECTORATE INVITED LEADERS OF NFPE & SBCO EMPLOYEES ASSOCIATION FOR THE DISCUSSION ON THE SBCO RELATED ISSUES ON 27.05.2014 AT 1500 HRS AT DAK BHAWAN, NEW DELHI 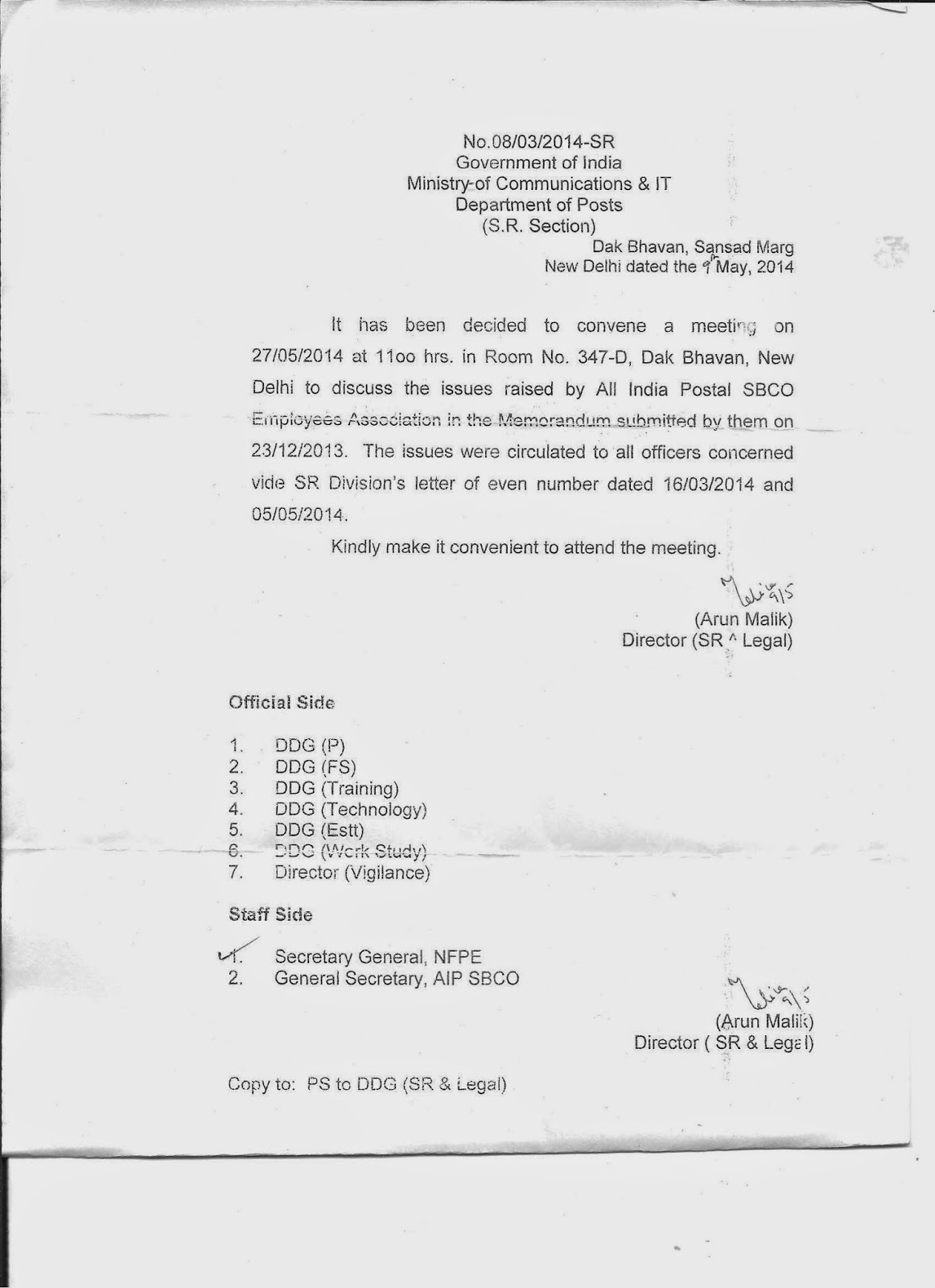 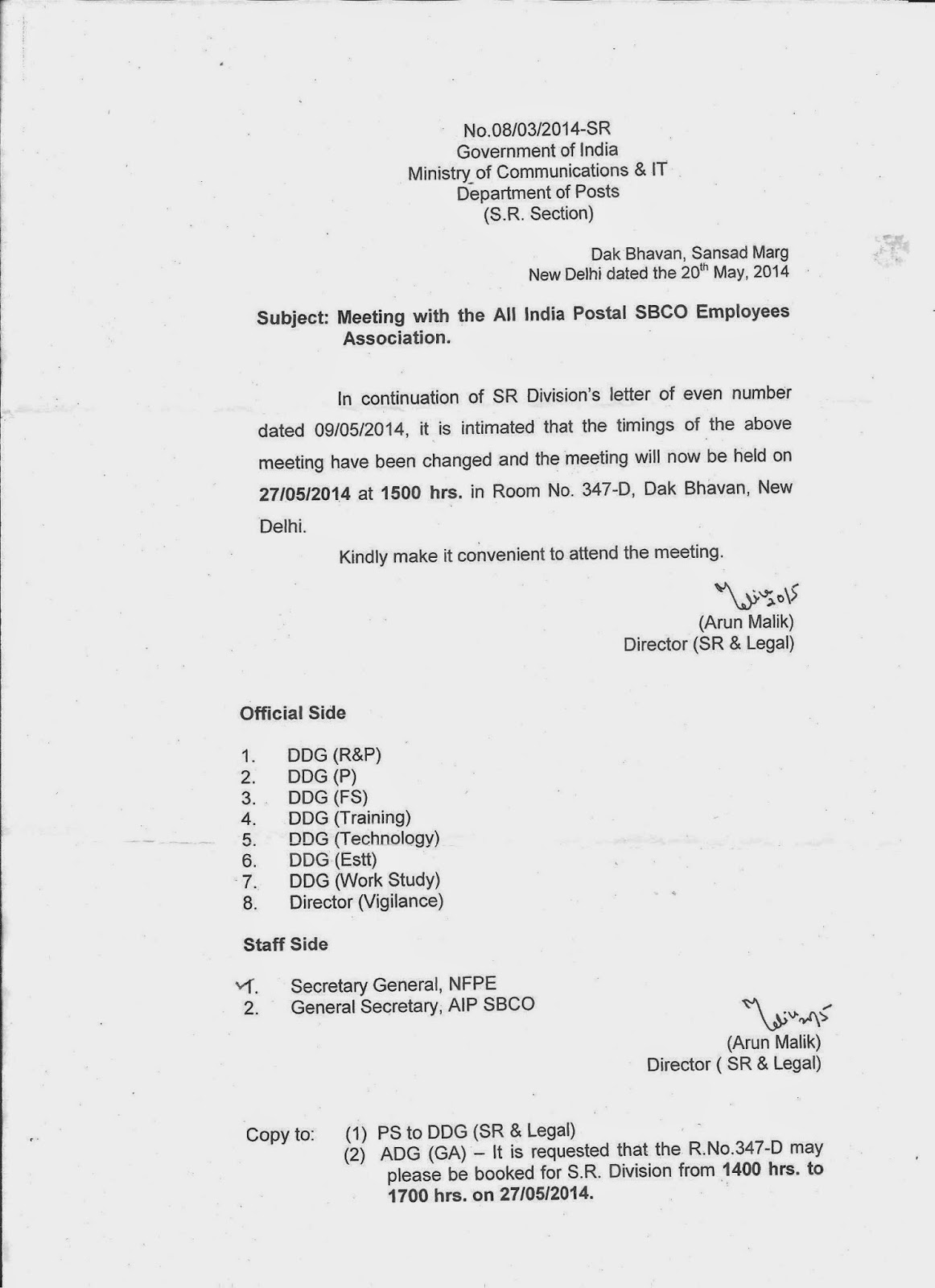 FOR  ATTENTION OF GDS COMRADES

For the last few days GDS  CHQ & NFPE is receiving large number of phone calls every day enquiring about the formation of divisional unions in the name of AIPEU GDS (NFPE) in the respective circles besides seeking information about the Court Case for Departmentalization of GDS & GDS Pay Committee etc.,

Our Secretary General, General Secretaries are very much patiently answering to all and explaining the current situation on organizational set up  and GDS issues. After knowing all the facts about the efforts of NFPE & AIPEU GDS (NFPE) for Departmentalization of BOs and Regularization of GDS for the last two years; the GDS members are very much impressed and enthusiastically join in AIPEU GDS (NFPE) by forming the Divisional Unions in their respective Circles.

Now it is very well aware of thousands of GDS that the agreement signed by the so called recognized union is a DEATH WARRANT and happened to be a big hurdle for inclusion of GDS in 7th CPC.

AIPEU GDS (NFPE) CHQ has been prepared a comprehensive memorandum on GDS issues to submit before the 7th Pay Commission. After submission it will be published in our websites.

The Secretary General, NFPE will explain all about the GDS Court Case and issues related to GDS and request need to consider GDS wage revision and service conditions under the purview of 7th CPC.

Let us hope for the best.
For the information of GDS comrades, our Union is well established in many Circles & divisions, however in some areas it is not taken place because of some limited reasons or the other, it is now well known to the GDS comrades of each and every division of such Circles and seeking cooperation from our CHQ in the formation of Divisional Unions and ready to joining as members of AIPEU GDS(NFPE).

Welcoming the situation, our CHQ is sincerely assuring that what ever cooperation and information regarding GDS office bearers and Circle Secretaries are ready and one can contact them in such instance. After the formation of new Govt. a huge responsibility is going to be shouldered by the GDS to achieve the demand of “inclusion of GDS in the purview of 7th CPC”.

Simultaneously, legal battle is going on. It is informed that the Dept. & Govt. has not yet submitted any reply to the High Court of Delhi till 07-05-2014. Further requested the Hon’ble High Court for 6 weeks of time to submit the reply and it is granted. Next date of adjournment is 19-09-2014.

Comrades, it is the high time to prepare ourselves for united struggles along with NFPE & Postal JCA. Many of our GDS have well experienced with the fragmented strikes conducted by the so called recognized union and adverse effects of such struggles.

NFPE and AIPEU GDS (NFPE) & POSTAL JCA ALONG WITH CENTRAL GOVT. EMPLYEES CONFEDERATION IS MARCH AHEAD FOR INTENSIVE STRUGGLE PROGRAMME FOR DEPARTMENTALIZATION OF BOs & REGULARIZATION OF GDS.

"No country, no people, no movement can stand aloof and be neutral in their struggle"

P.Pandurangarao
General Secretary
Posted by NFPE at 10:26 AM No comments:

Press News -- BANK PERMIT TO INDIA POST ON THE WAY 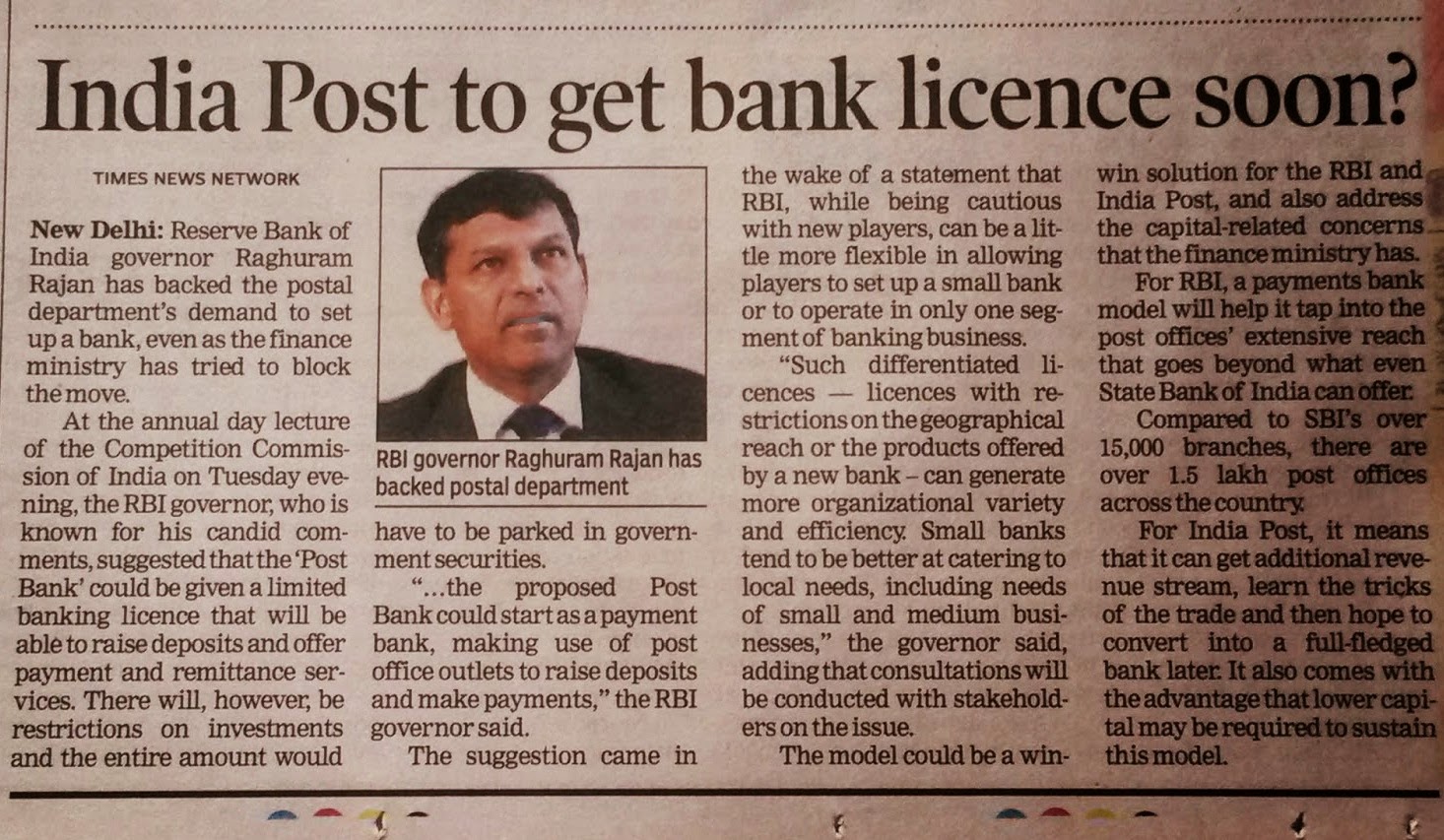 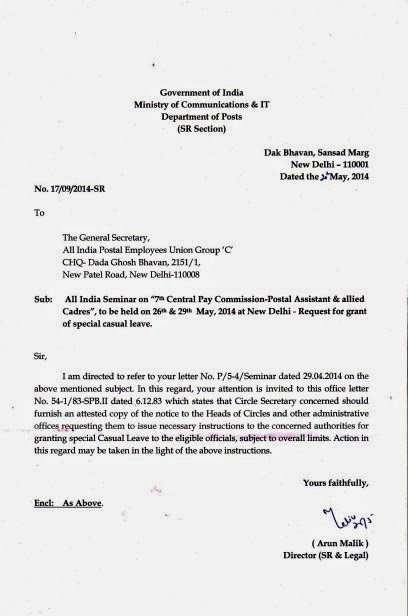 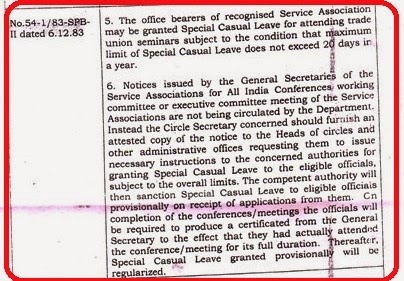 GRANT OF TA TO NON-OFFICIAL MEMBERS ATTENDING THE SCOVA MEETINGS PERMISSION TO PERFORM AIR JOURNEY FOR JOURNEY ABOVE 1000 KMS. (Click the link below for details)
http://ccis.nic.in/WriteReadData/CircularPortal/D3/D03ppw/PPWG_190514.pdf

IN THE HIGH COURT OF DELHI AT NEW DELHI


1. Dr. Ashwini Bhardwaj enters appearance on behalf of respondents.He seeks and is granted six weeks to file a counter affidavit.

2. Rejoinder, if any, be filed before the next date of hearing.

4. A perusal of paragraph 3 of the order is indicative of the fact that the Supreme Court in order to avoid multiplicity of proceedings has transferred the matter to this Court.

5. Counsel for the petitioner is advised to ascertain as to whether any writ petition has been filed in any other High Court and, if that be so, whether the aforementioned order of the Supreme Court has been brought to the notice of the concerned High Court.

FOR FURTHER INFORMATION CLICK HERE
Posted by NFPE at 4:31 PM No comments:

CLICK HERE
Posted by NFPE at 3:43 PM No comments:

CLICK HERE
Posted by NFPE at 2:56 PM No comments:

Summary Report by FINANCE MINISTRY for the Calendar Year 2013

The above Act of Parliament received the assent of the President on the
9th May, 2014

AN ACT to establish a mechanism to receive complaints relating to disclosure on any allegation of corruption or wilful misuse of power or wilful misuse of discretion against any public servant and to inquire or cause an inquiry into such disclosure and to provide adequate safeguards against victimisation of the person making such complaint and for matters connected therewith and incidental thereto.
Posted by NFPE at 10:37 PM No comments: 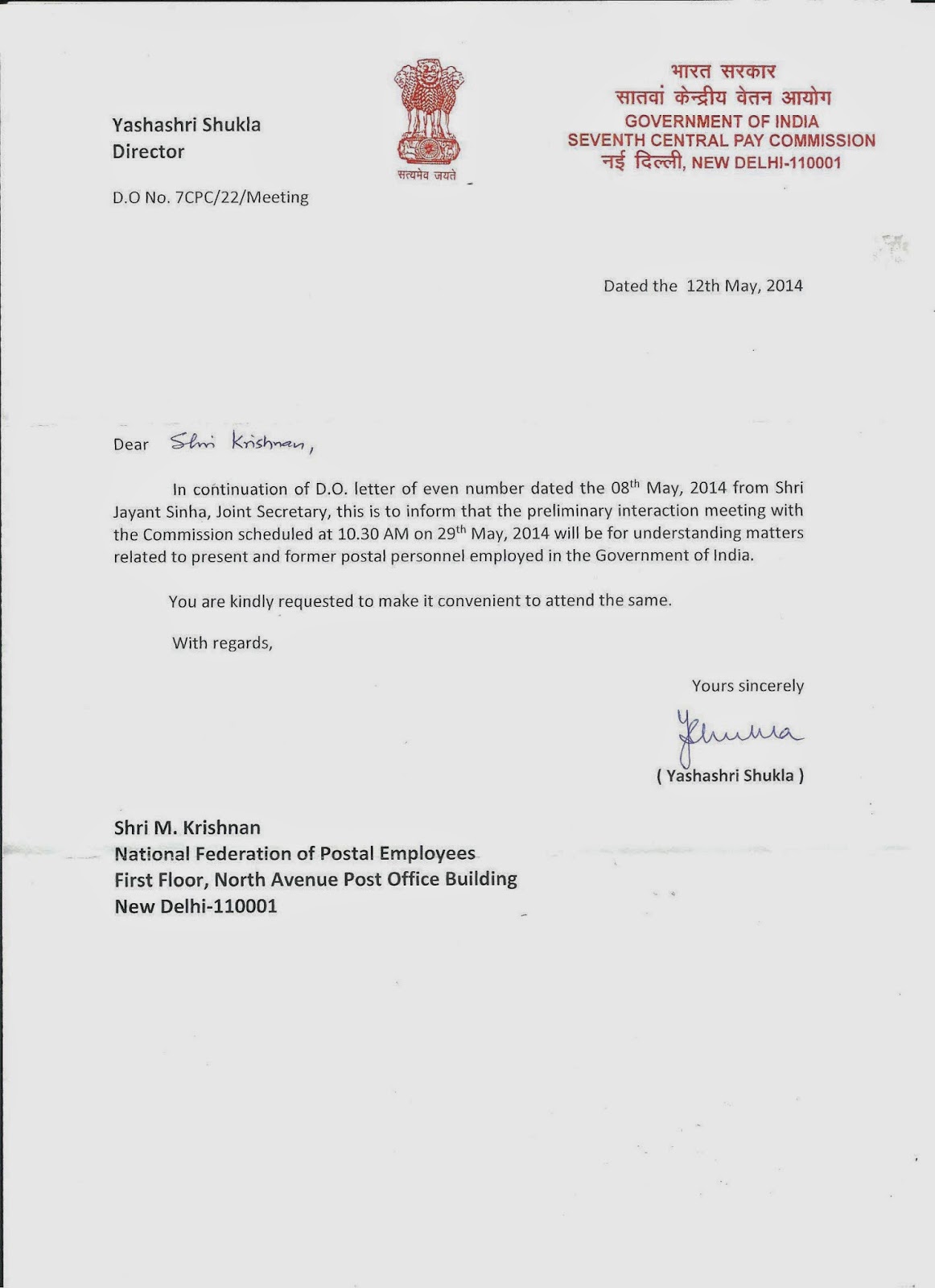 
Confederation
Posted by NFPE at 11:48 AM No comments:

UP Circle P-IV union CWC was held at Lucknow on 10.05.2014. The CWC meeting was presided over by Com. Anil Chaudhary Circle President P-IV UP.
First of all a warm welcome was given to Com. Seethalaxmi General Secretary P-IV union who came Lucknow for the first time after being elected as General Secretary P-IV  Union. Com. Vikram Shah Circle Secretary P-IV UP and President CHQ garlanded her and presented shawl and memento. Many Comrades of Lucknow Division and Lucknow GPO garlanded her.
Other leaders including Com. R.N. Parashar, ASG NFPE and Circle President P-III UP ,Com. Virendra Tiwari General Secretary SBCO union, Com. TP Mishra Advisor P-III UP, Com. Subhash Mishra Circle Secretary P-III UP, Com. R K Gupta Circle Secretary R-III UP, Com. Narottam Tripathi Circle Secretary R-IV UP, Com. S B Yadav Circle Secretary Postal Accounts UP, Com. R S Chand Working President P-III UP, Com. Shesh Mani Tripathi ACS P-III UP, Com. V.B. Pachauri ACS P-III UP, Com. Trigun Sen Org. Secretary P-III UP, were also welcomed by the Reception Committee by garlanding and presenting the Mementos.
Before commencement of CWC homage was paid to the martyrs by observing 2 minutes silence. CWC commenced with the welcome speech of Com. Vikram Shah. The CWC was inaugurated by Com. R. Seethalaxmi who elaborately described the issues related to postmen and MTS Cadre and role of P-IV CHQ and NFPE in resolving the same. Com. R N Parashar, Assistant Secretary General NFPE while delivering the speech thrown light on past glorious history of NFPE and challenges being faced by the unions in the wake of globalization policies.  He stated the present position of pay commission and other various issues related to Postal Department. He appealed all to strengthen GDS NFPE union in UP. All other leaders mentioned above also expressed their views and wished success of CWC and assured all co-operation to P-IV union.
All CWC office bearers and Divisional Secretaries present in the CWC put their views on agenda , At last Com. Vikram Shah Circle Secretary concluded the discussion and assured to try his best to resolve the issues taken by comrades. He thanked Com. General Secretary and other leaders for taking part in CWC.
Com. R S Maurya Ex. Circle President P-IV and Com. R S Kathriya also extended their best wishes to the CWC. Com. Naresh Gupta Divisional Secretary P-III Lucknow GPO and Com. Raj Bahadur Yadav Divisional Secretary P-III Lucknow City Division were also present in the meeting.
The role of Coms. Sajid, Surender, Pradip Tiwari, Ram Gopal, Ravinder Srivastav deserves appreciation in making the CWC a grand success. 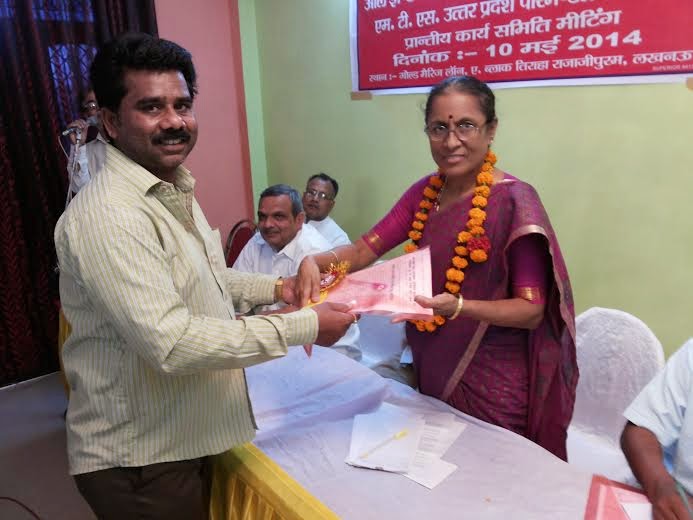 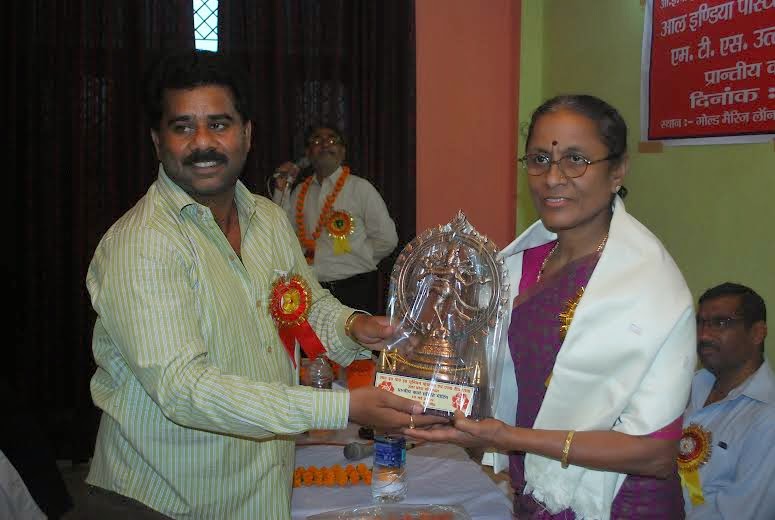 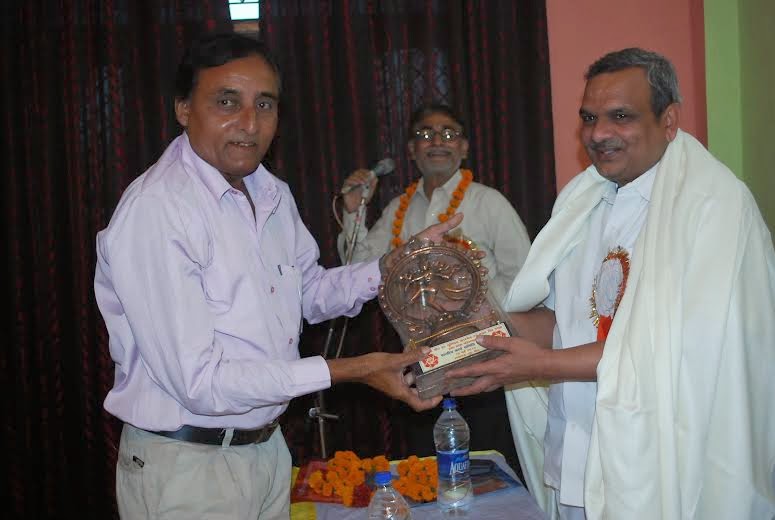 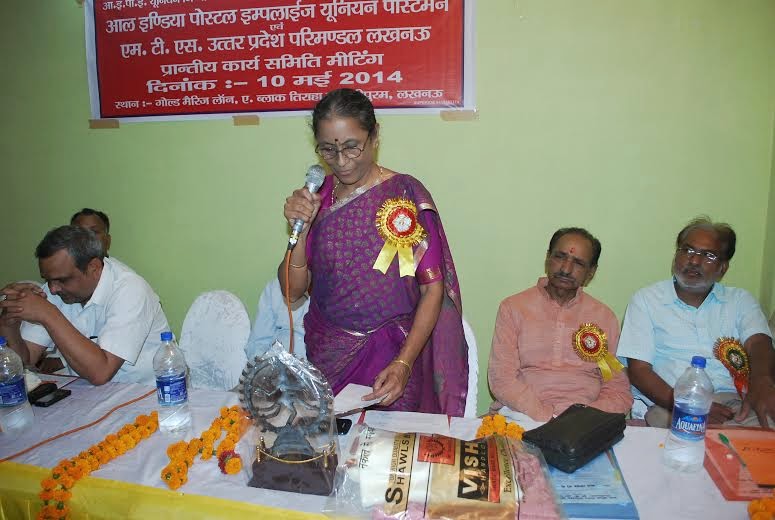 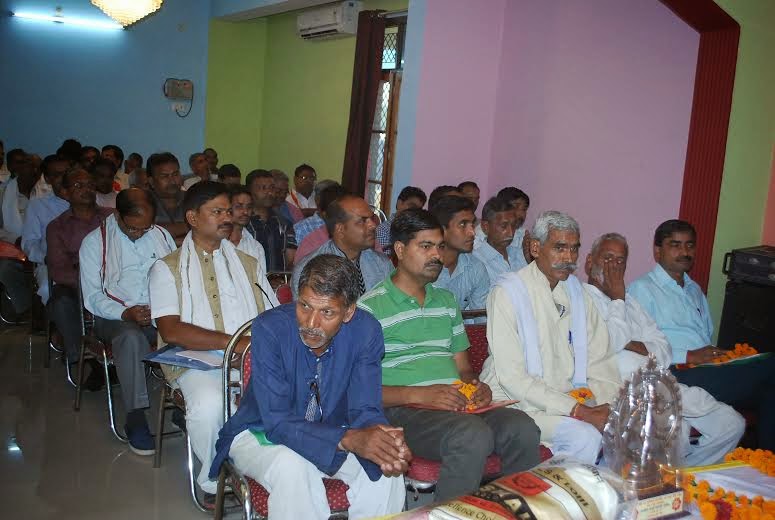 FinMin nixes India Post's plan to set up a BANK

FINANCE MINISTRY Tells RBI this is not the time to consider such a foray, especially given the lack of funds to spare for such a venture

CLICK HERE TO READ THE PRESS NEWS
Posted by NFPE at 12:15 AM No comments: