Compendium of instructions on reservation for ex-servicemen.--- DoPT release

CLICK HERE TO VIEW
Posted by NFPE at 11:40 PM No comments:

Hence, Central Government employees as well as pensioners are entitled for DA/DR at the rate of 100 percent of the basic with effect from 01.01.2014. The increase is in accordance with the accepted formula based on the recommendations of the 6th Central Pay Commission.

The Union Cabinet today gave its approval to the Terms of Reference of 7th Central Pay Commission (CPC) as follows:-

a)      To examine, review, evolve and recommend changes that are desirable and feasible regarding the principles that should govern the emoluments structure including pay, allowances and other facilities/benefits, in cash or kind, having regard to rationalization and simplification therein as well as the specialized needs of various Departments, agencies and services, in respect of the following categories of employees:-

b)      To examine, review, evolve and recommend changes that are desirable and feasible regarding principles that should govern the emoluments structure, concessions and facilities/benefits, in cash or kind, as well as retirement benefits of personnel belonging to the Defence Forces, having regard to historical and traditional parities, with due emphasis on aspects unique to these personnel.

c)      To work out the framework for an emoluments structure linked with the need to attract the most suitable talent to Government service, promote efficiency, accountability and responsibility in the work culture, and foster excellence in the public governance system to respond to complex challenges of modern administration and rapid political, social, economic and technological changes, with due regard to expectations of stakeholders, and to recommend appropriate training and capacity building through a competency based framework.

d)     To examine the existing schemes of payment of bonus, keeping in view, among other things, its bearing upon performance and productivity and make recommendations on the general principles, financial parameters and conditions for an appropriate incentive scheme to reward excellence in productivity, performance and integrity.

e)      To review the variety of existing    allowances presently available to employees in addition to pay and suggest their rationalization and simplification, with a view to ensuring that the pay structure is so designed as to take these into account.

f)       To examine the principles which should govern the structure of pension and other retirement benefits, including revision of pension in the case of employees who have retired prior to the date of effect of these recommendations, keeping in view that retirement benefits of all Central Government employees appointed on and after 01.01.2004 are covered by the New Pension Scheme (NPS).

g)      To make recommendations on the above, keeping in view:

i.          the economic conditions in the country  and need for fiscal prudence;
ii.         the need to ensure that adequate resources are available for developmental expenditures and welfare measures;
iii.        the likely impact of the recommendations on the finances of the State Governments, which usually adopt the recommendations with some modifications;
iv.        the prevailing emolument structure and retirement benefits available to employees of Central Public Sector Undertakings; and
v.          the best global practices and their adaptability and relevance in Indian conditions.

h)      To recommend the date of effect of its recommendations on all the above.

The Commission will make its recommendations within 18 months of the date of its constitution.  It may consider, if necessary, sending interim reports on any of the matters as and when the recommendations are finalised.

The decision will result in the benefit of improved pay and allowances as well as rationalization of the pay structure in case of Central Government employees and other employees included in the scope of the 7th Central Pay Commission.

Central Pay Commissions are periodically constituted to go into various issues of emoluments’ structure, retirement benefits and other service conditions of Central Government employees and to make recommendations on the changes required.

The statements of Confederation, CHQ and NFPE, CHQ will be published shortly after collecting full details.

CLICK HERE
Posted by NFPE at 4:50 PM No comments:

CLICK HERE
Posted by NFPE at 4:34 PM No comments:

Voluntary retirement under FR 56(k), etc. and amendment of Rules.

JUDGMENT COPY OF STEPPING UP CASE FILED BY AIPAEA IN THE PR.CAT, NEW DELHI

CLICK HERE
Posted by NFPE at 4:15 PM No comments:

In order to meet the requirements and needs of the I.T modernization project, Infosys Core banking Solution (CBS) will be implemented across India covering all the Post offices.

Core Banking Solution (CBS) - FINACLE is networking all the Post offices which enable customers to operate their accounts and avail Account related services from any Post offices on CBS network regardless of where he/she maintains his/her account. The customer is no more the customer of a particular Post office. He becomes the Post office Savings Bank (POSB) customer. Thus CBS is a step towards enhancing customer convenience through “Anywhere and Anytime Banking”. As Finacle is integrated to all the banks in course of time, the customer can access any bank account through post office.

Around Rs.700 crore is earmarked for this Project. Core Banking Solution(CBS) for Post office Savings Bank is being implemented throughout India. As on date, 57 Head Post offices and 11 Sub Post offices have migrated covering 64 lakh accounts.  By 31.03.2014, 700 more Post offices will be covered. All the 26,840 Post offices would be functional in CBS by 2016.

NFPE INVITES THE MEMBERS OF DE-RECOGNISED ASSOCIATION OF POSTAL SUPERVISORS .

ALL ARE INVITED TO JOIN HANDS WITH NFPE FIGHTING FOR THE CAUSE OF THEM ALSO. 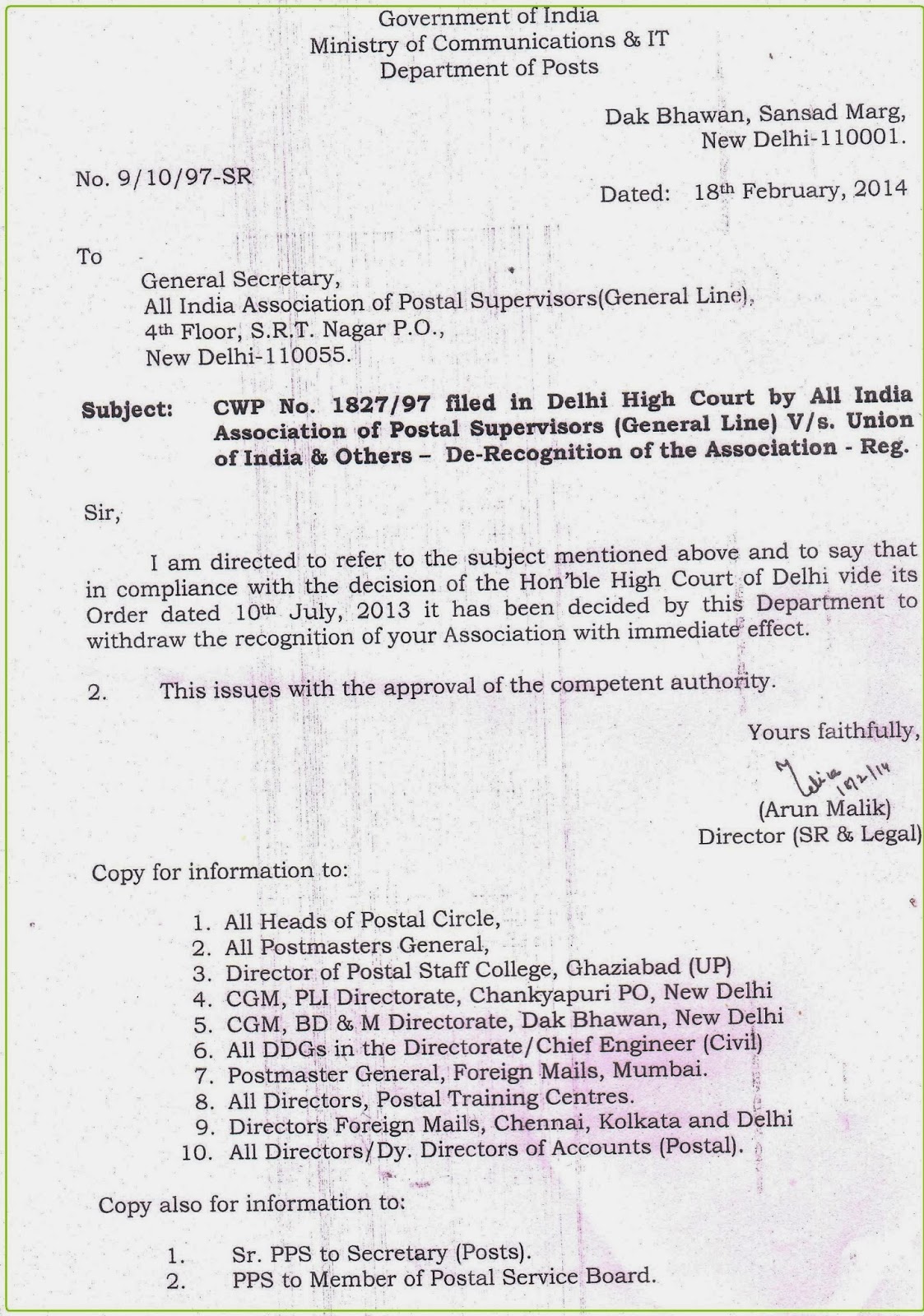 Revised Procedure, scheme and syilabus for filling up of the post of Postal Assistant / Sorting Assistant

Execution of Bond for availing Study Leave under rule 53(4) of the CCS(Leave) Rules, 1972

Representation of SC, ST, OBC, Minorities and the Women on Selection Board/Committees.

Advance to Government Servants- Rate of interest for purchase of conveyances during 2013-2014.

CADRE RESTRUCTURING OF GROUP ‘C’ EMPLOYEES OF DEPARTMENT OF POSTS

2. The Committee had earlier met on 27th Nov.

3. The representatives of the Staff side informed that Postal Assistant cadre officials are getting promotions in promotional hierarchy to Grade Pay of Rs. 2800/- (PB-1) in Lower Selection Grade at a time when they are already placed in the Grade Pays’ of Rs. 4200/- (PB-2) or Rs. 4600/- (PB-2) on award of financial upgradation(s) under MACPS. At this, the official side asked Staff side to furnish copies of the orders on above lines from few Circles to corroborate the above claim. The Committee recommends that before processing these recommendations, Establishment Division may obtain the same from Staff Side. After discussions, the following recommendations in respect to the cadre restructuring of Group ‘C’ employees were agreed to by the Department.

CADRE RESTRUCTURING – STAFF SIDE
LETTER SUBMITTED TO DEPARTMENT ON 05.02.2014

While appreciating the positive attitude taken on some of our proposals submitted to the Cadre Restructuring Committee, we are totally disappointed and feel let down by the way in which certain valid points raised by us has been simply brushed aside and rejected by the Administration side in a pre-decided manner, even without examining the merits or demerits of our suggestions. Outright and summary rejection seems embarrassing.

We are once again constrained to submit the following proposals and modifications for your judicious and dispassionate consideration and acceptance, with a fervent hope that the same will receive due consideration.

Now we are having 4892 LSG Posts in General line (6989-2097 PM Cadre). Even after upgrading ‘A’ class Postmasters as HSG-II (GP 4200) the number of Posts available for upgradation to HSG-II will be less than the number available now and employees are not going to be benefited, if only those posts are upgraded. Hence our request for upgradation of all existing LSG posts (not only Postmasters posts) to GP 4200 along with Postmaster posts of ‘A’ Class offices. Similarly all posts in HSG-II (other than Postmaster Posts also) may be upgraded to 4600/-.

Hence it is once again requested to upgrade all the posts of PO & RMS Accountants to LSG (GP 2800) and LSG APM Accounts posts to HSG II (GP 4200) and at least 20% of the posts in upgraded GP 4200 may be further upgraded to HSG-I APM Accounts (GP 4600). Thus Accountant qualified officials will have their own channel of promotion. Regarding promotion to GP 4800/- the conditions applicable to General line officials may be made applicable to them also.

4.      SYSTEM ADMINISTRATORS:
In the JCM Departmental Council meeting held on 27.08.2010, JCM (DC) standing Committee dated 18.12.2012 and 23.08.2013 it was decided that the demand for creation of a separate cadre for system Administrators will be considered by the Cadre Restructuring Committee.

But to our dismay, surprisingly the Department informed in the JCM Departmental Council meeting held 23.08.2013 that creation of separate cadre is not feasible.

We are totally in disagreement with the above stand taken by the Department. it seems that the Department has already made up its mind not to create a separate Cadre. We are not repeating the unstinted yeomen service done by the existing System Administrators since the inception of computers in Postal Department by converting it from a wholly computer illiterate department to the present fully computerised status. We have already explained in detail all the points which justified a better treatment for system Administrators and also for creation of a separate cadre as a promotional cadre of qualified PA/SAs. Inspite of all our best efforts, it is quite unfortunate that the Department is taking a totally unreasonable and negative attitude towards the SAs and their claim for better treatment has been mercilessly rejected.

The role of existing System Administrators in total computerization and also in core banking Solutions must be recognised. They are very much frustrated and the discontentment is mounting due to the continuous exploitation of these category of officials for the last more than ten years..

6.      CHANGE OF NOMENCLATURE:
As already explained by us the present nomenclature for supervisory post viz: - LSG, HSG-II, HSG-I does not exhibit the nature of status of the officials holding the posts to the customers and public and it require change.

7.      SBCO STAFF:
In the case of SBCO Staff the following proposal is submitted.

8.      POSTMEN STAFF/MAIL GUARD:
In the case of Postmen/Mail Guard Staff as already suggested by us percentage promotion may be granted and the same may run concurrently with MACP as in the case of staff car drivers of MMS.

9.      MULTI TASKING STAFF:
As the nature of duties of MTS Staff in Post offices/RMS offices is entirely different from their counterparts in other departments of Government of India, we reiterate our request for bringing MTS Staff also under the purview of Cadre Review.

10.  MATCHING SAVINGS:
(a)   Even after the above cadre review proposals are implemented none of the existing officials will be benefited-financially as more number of officials are available under MACP in the Grade pay of 2800, 4200 and 4600 to work against the upgraded posts of 2800, 4200 & 4600 because of MACP-I, II & III. At present there are 26000 MACP II officials and 12000 MACP III officials in the Department of Posts. Even after upgradation as above, more number of officials will be getting MACP-I, II and III, much earlier than their normal promotion to grade pay 2800, 4200 & 4600 (LSG, HSG II and HSG-I). Hence the question of matching savings does not arise at all.

(b)   6% posts in operative cadre and 20% posts in supervisory cadre was reduced as a matching savings when TBOP, BCR scheme was in force. The TBOP/BCR scheme has been scrapped on introduction of MACP scheme. Directorate has issued orders for restoration of justified posts without 6% and 20% cut. But no posts are sanctioned or restored. The cut still remains. If at all any matching savings is required, the above fact may be taken into account and the posts yet to be restored may be adjusted as matching savings.

Once again request you to consider the above points favourably.