CONSOLIDATED INSTRUCTION ON LIFE CERTIFICATE AND COMMENCEMENT OF FAMILY PENSION IF PENSIONER / FAMILY PENSIONER IS LIVING ABROAD (Click the link below to view)
http://documents.doptcirculars.nic.in/D3/D03ppw/Life%20Certificate%20of%20Pensioners%20living%20abroadmWMPP.pdf 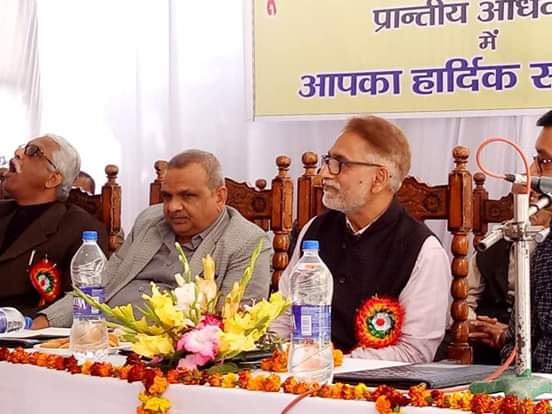 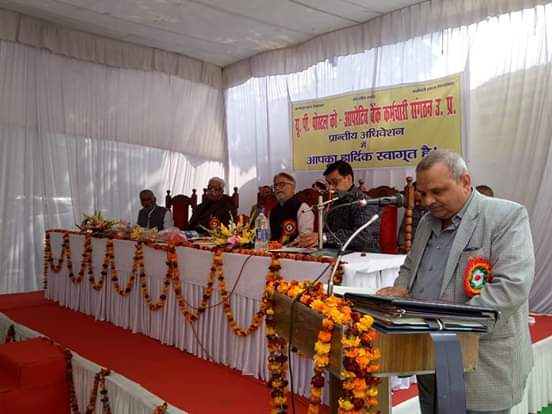 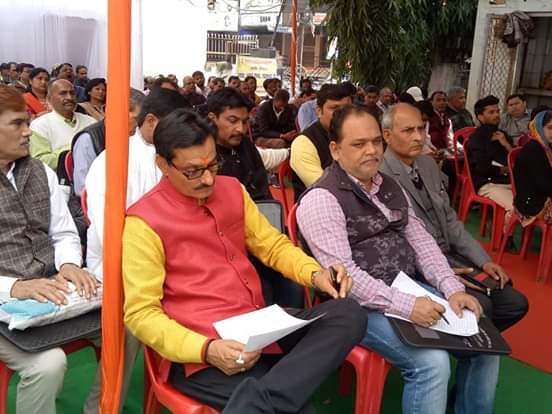 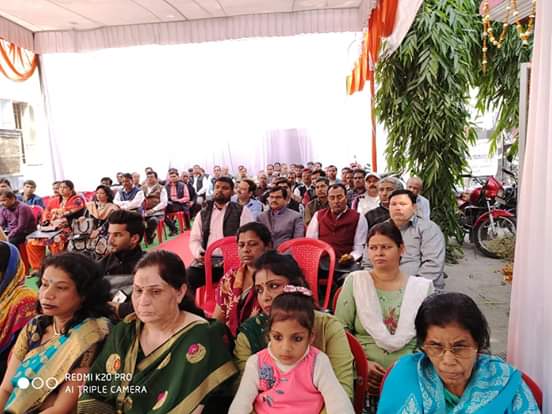 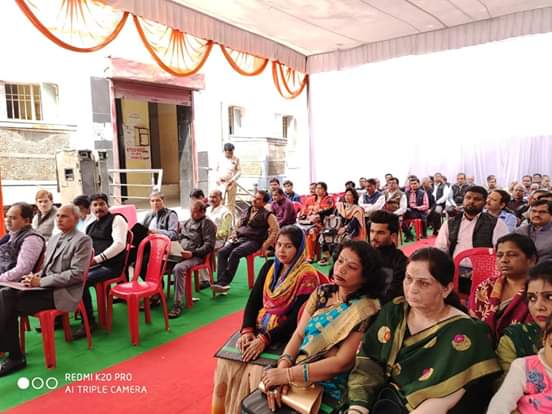 Posted by NFPE at 10:46 AM No comments: Links to this post 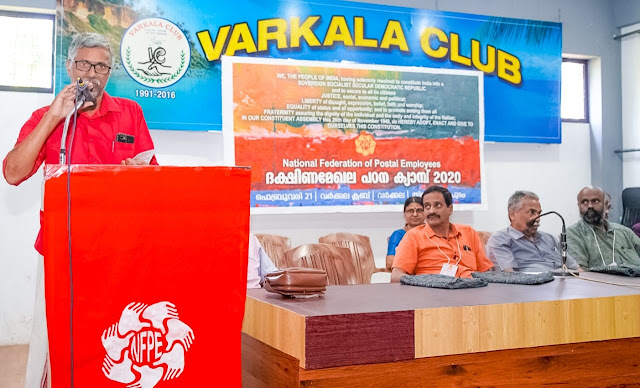 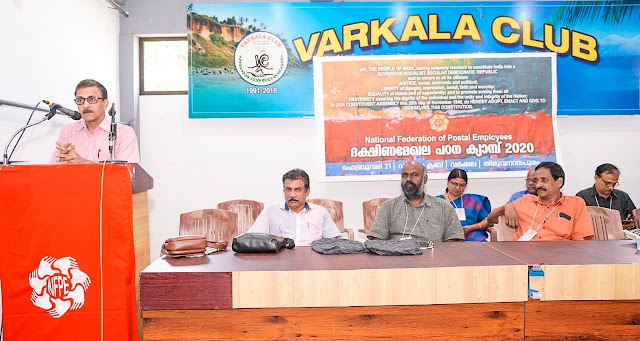 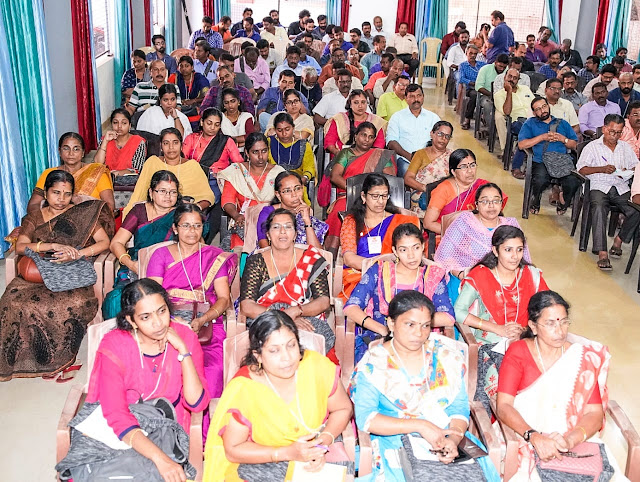 Posted by NFPE at 11:37 AM No comments: Links to this post

NON-PAYMENT OF SUBSISTENCE ALLOWANCE TO AN EMPLOYEE DURING SUSPENSION WILL BE ANTIHETICAL TO ARTICLE-21:: MADRAS HIGH COURT ::  WA NO.1352 OF 2019
CLICK HERE  FOR COPY OF JUDGEMENT (42 PAGES)

Posted by NFPE at 3:47 PM No comments: Links to this post 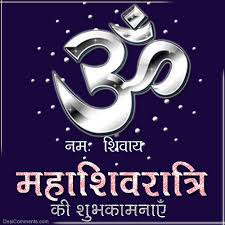 Posted by NFPE at 12:46 PM No comments: Links to this post

Southern Regional camp is scheduled to be held at Varakala Trivandrum on 21st Feb   and Central Regional camp at Thrissur on 23rd. 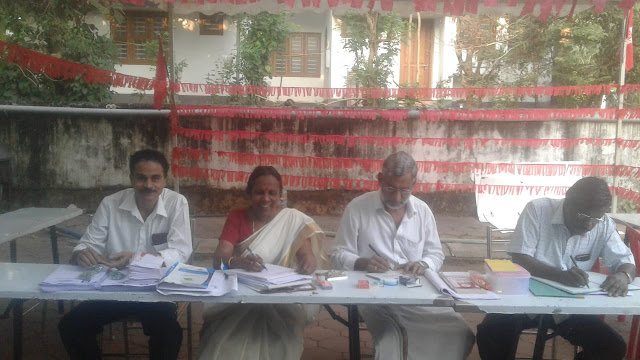 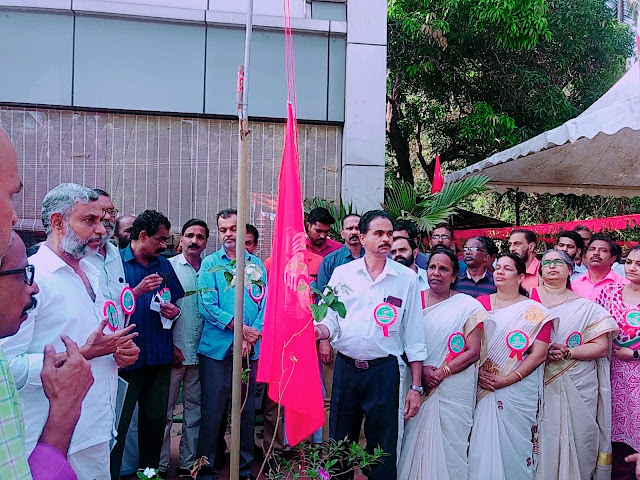 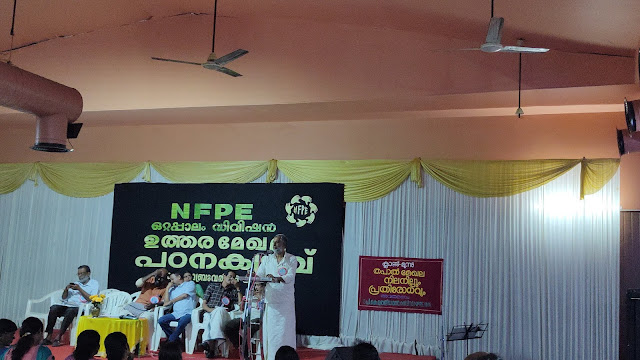 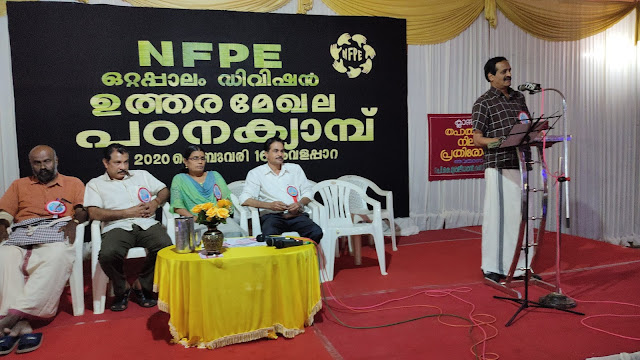 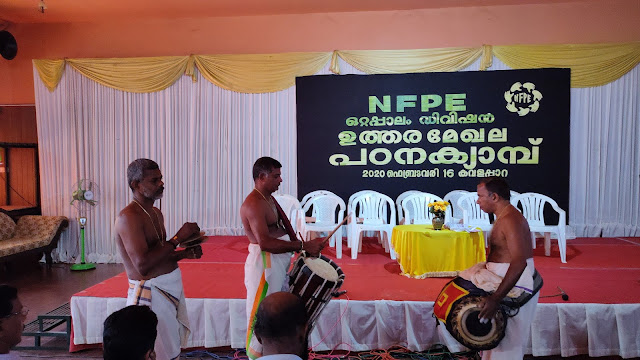 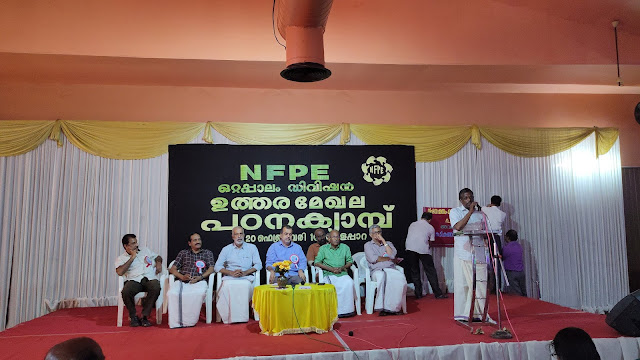 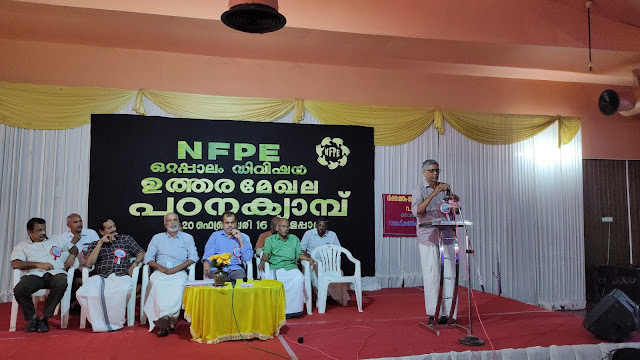 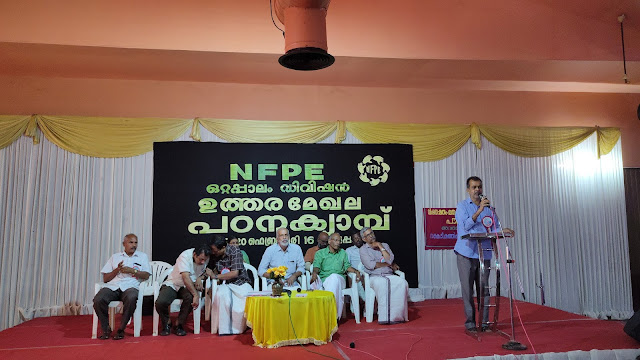 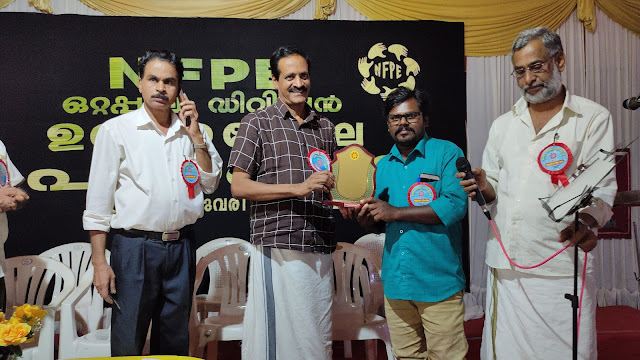 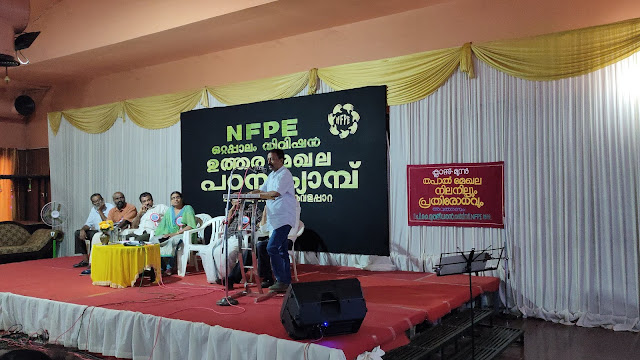 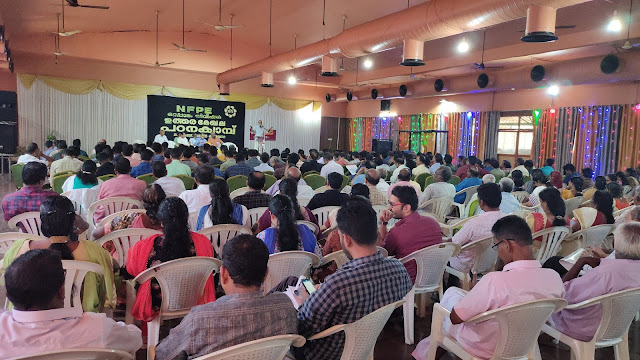 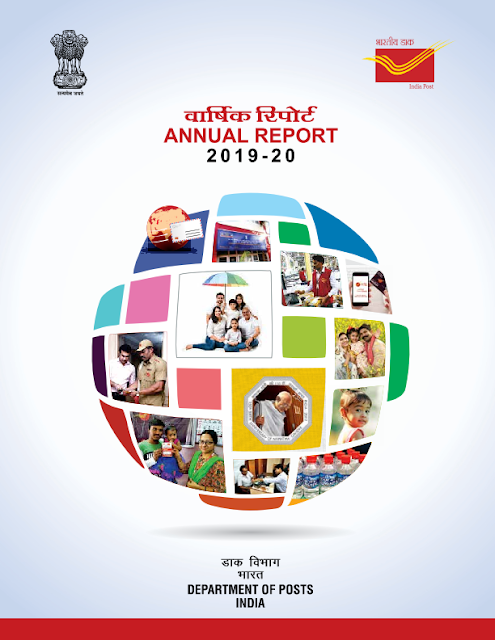 Posted by NFPE at 1:27 PM No comments: Links to this post

COUNTING OF SERVICE ON JOINING NEW SERVICE IN STATE GOVERNMENT / CENTRAL GOVERNMENT / AUTONOMOUS BODY FOR THE BENEFIT OF GRATUITY IN RESPECT OF CENTRAL GOVT. EMPLOYEES COVERED UNDER NATIONAL PENSION SYSTEM (NPS) (Click the link below to view)
http://documents.doptcirculars.nic.in/D3/D03ppw/No_7_5_2012-P_PW_F_B_EngcienL.pdf

Posted by NFPE at 3:35 PM No comments: Links to this post

1.       Chairperson                     :        Com.Manisha Majumdar
(COC-West Benal & National Federation of Printing, Stationery and Publications Employees)
2.       Vice Chairpersons          :        1.   Com.Jayasree Raj (Audit & Accounts)
2.     Com.P.Rema (NFPE)
3.       Convener                          :        Com. Usha Boneppalli (ITEF)
4.       Joint Convenors              :        1.   Com.Jasmine Jalal Begum (SBCOEA-NFPE)
2.     Com.Lalitha Narayana Swamy (COC Mumbai &
Audit and Accouts)
3.     Com.Susmitha Sarkar (COC West Bental &
Indian Institute of Engineering Service andTechnoloy IIEST-                                              Autonomosu Body).
5.       Auditor                               :        Com.R.P.Singh (Agmark).
The house authorised newly elected National Secretariat to fill up the four vacant posts as and when intimation regarding the nominees of the concerned organisations are received.
Agenda No.9 - Appointment of Auditor:
The Conference nominated Com.R.P.Singh (Agmark) of COC Mumbai (Maharahstra) as the Auditor of the Confederation for the period 2020-2023.  He is also authorised to audit the Accounts for the period 2016-2019.
Women Committee Members:
The National Conference decided that each affiliated organisation and COC should intimate the names of women comrades who are to be included as Members of the Women’s Committee. Bigger organisations may nominate maximum six women comrades and smaller organisations may nominate one or two women comrades as Members of the Confederation Women’s Committee for the period from 2020-2023.  Names of the Women Comrades may be sent to Com.R.N.Parashar, Secretary General, Confederation, 1st Floor, North Avenue Post Office Building, New Delhi-110 001, before 15-03-2020.  Mob & WhatsApp: 09718686800, Email ID - nfpehq@gmail.com.
After finalising the list of Women’s Committee members, the National Secretariat shall convene a National Women’s Convention of Confederation, as early as possible.
Com.S.K.Vyasji Remembrance Day:
26th National Conference paid rich tributes to Com.S.K.Vyasji, legendary leader of Central Govt. Employees and Pensioners. Com.Vyasji expired on 13th February 2015.  The National  Conference further decided that from next year (2021) onwards, Com.S.K.Vyasji Remembrance Day shall be observed by organising certain programmes, to be decided by the newly elected National Secretariat.
Scrap PFRDA Act - 22nd December to be observed as “Black Day”:
Government of India introduced the New Contributory Pension System(NPS) through a Gazette notification dated 22nd December 2003 to all New entrants recruited on or after 01-01-2004.  Thereafter Pension Fund Regulatory and Development Authority Act (PFRDA) came into effect from 18th September 2013, legalising the NPS.  The 26th National Conference unanimously decided to observe “22nd December” as Black Day wearing badges with Demand “Scrap NPS, Restore OPS” and organising protest demonstrations in front of offices and seminars etc.
Honouring of the Reception Committee office bearers and volunteers:
The house honoured the office bearers and volunteers of the Reception Committee who worked hard with full commitment and dedication for the last more than six months, especially during the days of the Conference, which made the 26th National Conference a grand success.
All arrangements including transport, food, accommodation were made flawless and overall it was excellent.  The conference congratulated all members of the Reception Committee headed by Com.R.K.Shrivastava (Chairman) and Com.Nilesh D. Nasare (General Secretary) and placed on record its thanks and appreciation for the commendable work done by them for making the conference a memorable event.
The conference concluded at 5 PM on 8th Febuary 2020 with vote of thanks by Com. R.N.Parashar, newly elected Secretary General.
R. N. Parashar,
Secretary General,
Confederation.
Annexure-I
CONFEDERATION OF CENTRAL GOVT EMPLOYEES & WORKERS
POLICY AND PROGRAMME RESOLUTION
(Adopted in the 26th National Conference held at Nagpur on
7th & 8th February 2020)

1      This 26th  National Conference of Confederation of Central Government Employees & Workers, held at  Nagpur on 7th & 8th February 2020, after detailed deliberations has come to the unanimous conclusion that the attitude of the NDA Government in  power at Centre is completely negative towards the genuine and legitimate demands of the Central Government employees including Gramin Dak Sevaks and casual/contract workers. None of the 7th CPC related modifications sought by the JCM National Council, staffside, is settled. The assurance given to the leaders of  the National Joint Council of Action (NJCA) regarding increase in Minimum pay and fitment formula is not honoured and the employees and pensioners are betrayed.
2.     The New contributory Pension Scheme (NPs) has in effect become "No pension Scheme".  Inspite of Several memorandums and petitions submitted and also agitational programmes including strikes, the Central Government is not ready to scrap NPS and  restore OPS and also to guarantee 50%  of the last pay drawn as Minimum pension.
3.     About seven lakhs posts are lying vacant in various Central Government departments. Though the Government repeatedly states that there is no ban on recruitments and filling up of direct recruitment quota vacancies, no time bound action is taken to fill up the vacant posts.
4.     HRA arrears, MACP  Bench mark, MACP hierarchical promotional pay scale, and date of effect from 01-01-2006, option- I for pensioners -- Government is not ready to reconsider its negative stand. Three  lakhs  Gramin Dak Sevaks of the Postal  department are yet to be treated as Civil Servants.  Exploitation of casual and contract workers continue and equal pay for equal work is denied to them.
5.     Large scale outsourcing, downsizing, closure of establishments, Corporatisation, and privatisation has become the order of the day.  Privatisation of Railways and mass scale outsourcing of the work done by the Defence Civilian employees are in full swing.  Proposal to corporatize defence ordnance factories is not yet dropped.  12 out of 17 Govt. of India Printing Presses are ordered to be closed.  Same is the fate with other departmental printing presses including Railway Printing presses.
6.     Autonomous body employees and Pensioners are denied their rightful pay and pension revision in certain departments, due to stringent conditions imposed by the Finance Ministry.  Compassionate appointments have become a mirage due to the 5% ceiling imposed.
7.     Trade Union facilities are denied.  Orders banning demonstrations and dharnas are issued.  The draconian FR 56 (j) and Pension Rules 48 are misused as a short cut to punish and victimise employees who are not in the good book of higher-ups. JCM forums have become mere talking shops without any positive outcome.  Recognition under CCS(RSA) Rules 1993 are delayed and Departmental council meetings have become defunct in many departments.  Government sponsored unions are given undue patronage.  Recognition of fighting organisations are withdrawn on flimsy grounds and Trade Union facilities are denied to the Chief Executives of Recognised Associations.  To throttle the democratic functioning of the Unions, the Government of India has now proposed to restrict the tenure of office of the elected representatives of Unions/Associations/Federations of Government employees.
8.     This Conference has taken serious note of the continuing onslaughts on the independence and democratic functioning of the constitutional institutions in the Country, the steps taken to create a fear psychosis amongst the people, especially amongst minorities, the conscious disruption of the secular social fabric of the society assiduously built over the years, the receding confidence in the independence of judiciary in the country and above all the concerted endeavour to fan the communal feelings to cover up the failure on economic front and the growing unemployment, inflation, rise in prices of essential commodities etc.
9.     This National Conference is of the considered opinion that the wage revision of Central Govt. employees should be once in five years, as in the case of many public sector undertakings and certain State Governments.  The last wage revision of Central Govt. employees had taken place with effect from 01-01-2016.  Five years will be over by 31-12-2020.  Also taking into consideration the fact that the 7th CPC Wage Revision was the worst wage revision, it is high time that the Government initiate the process for appointing next Central Pay Commission i.e., 8th CPC, so that the Pay, Allowances and Pensionary benefits of Central Govt. Employees will be revised with effect from 01-01-2021.
10.   Taking into consideration all the above demands and issues which are agitating the minds of 32 lakhs Central Govt. Employees and 33 lakhs Central Govt. Civilian pensioners, this 26th National Conference of Confederation of Central Government Employees and Workers, resolve to organise following agitational programmes for realisation of the long pending 10 points charter of demands submitted to Government by Confederation. (copy of the charter of demands enclosed).
Programme of Action:
1. Demands Day in March 2020.
2. Intensive Campaign among employees in the month of April, 2020.
3. One day mass dharna in the month of May 2020.
4. National Convention of Central Govt. Employees in the month of August, 2020.
5. Massive Parliament March in the month of September/October, 2020.
11.   As other Central Government Employees organisations and All India State Government Employees Federation are also organising similar programmes, this National Conference authorises the National Secretariat of the Confederation to keep in touch with like-minded organisations and explore the possibility of organising united action programmes on Minimum agreed demands, with “Scrap NPS and Restore OPS” as the main demand.

Annexure - III
GIST of the Resolutions Adopted by the 26th National
Conference of Confederation Held at Nagpur
on 7th and 8th  February 2020.
1. Scrap NPS, Restore OPS.
2. Five year  wage Revision with effect from 01-01-2021
3. Filling up of all vacant posts
4. Regularisation of casual/contract workers and payment of equal wage for equal work..
5. Civil servant status for GDS and implement all positive recommendations of Kamalesh Chandra Committee report.
6. Equal pay for equal work.
7. Stop outsourcing, contractorisation and privatisation.
8. MACP post based hierarchical promotion.  Date of effect 01-01-2006 and withdraw  "very good'' bench mark condition.
9.Settle all anomalies arising out of implementation of 7th CPC recommendations.
10. Modify the Recruitment Rules of Multi-Tasking Staff (MTS).
11. Ex-Servicemen pay fixation case.
12. One notional increment to those retired on 30th June.
13. Removal of 5% ceiling for  compassionate appointments.
14. Cashless and hassle-free medical treatment facility.
15. Revival and prompt functioning of Joint Consultative Machinery (JCM) at all levels.
16. Review of the newly declared Income Tax slabs.
17. Stop prise rice of   essential commodities including diesel, petrol and cooking gas.
18. Right to strike
19. Abolition of APAR system.
20. Five promotions to all Group B and  group C employees,
21. Revision of overtime allowance rates.
22. Regional Recruitment for Group C Posts.
23. Withdraw Citizenship Amendment Act 2019.
24. Withdraw all anti-labour amendments to Labour laws.
25.  Parity with Central secretariat staff.
26. Increase  the number of CGHS empanelled hospitals.  At least one empanelled CGHS hospitals should be there in every District.
27. Promotion earned through departmental promotional examinations should not be counted for MACP.
28. Withdraw DOP & T orders, restricting the tenure of holding elective office to maximum four years.
29. Strict action  against those committing atrocities against women and children.
30. Stop communalism and  ensure secularism as enshrined in the Constitution of India.
31. Bonus ceiling should be enhanced to  18,000/- with effect from 01-01-2016.
32. Providing at least one interpreter in all departments to remove the communication barrier of Deaf and Dumb employees.
33. Abolish and upgrade all LDC Posts to UDC.
34. Allow closed holidays to the operative staff of Postal department on all Saturdays, just like their counterparts working in Postal administrative offices.
35. Declare “May day” as closed holiday for  Central Government employees.
36. Constitute Prevention of Sexual harassment committees in all units.
37. CCL for two years must be with full pay.
38. Stop decentralisation of Postal Accounts.
******
Posted by NFPE at 12:03 PM No comments: Links to this post