It was extremely unfortunate that the Staff Side Secretary through his press statement issued yesterday has chosen to praise the Modi Government over the decisions it had taken on various demands of the Central Govt. employees. The said statement was issued apparently without causing any consultation either formally or informally with the other members of the Staff Side, in any case not at all in consultation with the signatories of this statement.  We, being the members of the Standing Committee, emphatically disagree and distance ourselves from the position taken by him in the Press Statement.

There had been no justification for the 7th CPC to reduce the rate of HRA by an imagined factor of 0.8. Neither during the discussions, the staff side had with the committee headed by the Expenditure Secretary, nor in the press release issued after the Cabinet meeting, the Govt. had advanced  any logic for their decision to restore the rate of HRA only for those who draw pay at the level of Rs.18000. There had been no appreciation of any of the concerns or issues raised by the staff side and whatever decisions so far taken by the Govt. was inconsonance with the views and recommendations of the top echelons of the bureaucracy,  be in the matter of allowances, minimum wage, fitment factor, rejection  of option no.1 for the pensioners or withdrawal of  NPS.
The highly defective computation of minimum wage by the 7th CPC and the consequent denial of a reasonable wage structure, withdrawal of existing allowances and benefits, virtual abrogation of the time bound promotion to the lower category of employees; rejection of option No. 1 to pensioners, refusal to grant atleast a  minimum guaranteed pension under NPS   require the  strongest condemnation.

The fact that decisions taken by the Govt. on 7th CPC issues are clear reflections of Modi Government's. anti- labour attitude ought to have been, what the staff side secretary conveyed through his press release. His statement has, as stated earlier sadly reflects the total disconnect between the common Central Govt. employees and JCM staff side leadership.

Had it been the statement on behalf of the AIRF, we would not have issued this denouncement  at all, as we consider that it is the prerogative of each organisation to view things in their perspective and formulate their  opinions.

FAST IN FRONT OF CPMG OFFICE CALLED OFF

MOST INSPIRING STRUGGLE IN THE HISTORY OF CASUAL LABOURERS.

As per the decision taken by the Central Working Committee of All India Postal Casual , Partime , Contingent and Contract Workers Federation , the fast infront of Chief PMG office Chennai commenced on 27th June 2017 demanding revision of wages of Casual Labourers with effect from 01.01.2006 and 01.01.2016 as per orders issued by Postal Directorate. Along with leaders of Casual Labour Federation , leaders of NFPE Circle Co-ordinating Committee (CCC) , Confederation State Committee also joined the programme extending full support and solidarity. The programme was organised under the leadership of NFPE CCC Tamilnadu Circle. More than 1000 casual workers participated in the struggle. Chief PMG held two round discussions with Circle Secretaries of NFPE on 27th June. CPMG took a stand that Directorate orders are not implemented in any circle and challenged our leaders to produce copies of the orders issued by Divisions in other circles. Next day morning Circle leaders produced before the Assistant Director ,  copies of orders issued and implemented in many divisions of Kerala , Andhra and Telangana including Vijayawada Region where the CPMG was working as PMG prior to his promotion as CPMG Tamilnadu. Understanding that his arguments stands demolished by NFPE Circle Unions , the CPMG , instead showing the courage to face the NFPE leaders again in the discussion table , suddenly left  Chennai (ran away !!) without intimating the leaders. It is learnt that he will not be available in Chennai for next four days.  NFPE COC held an emergent meeting and decided to declare one day strike on 13th July 2017 protesting against the negative stand of the Circle administration and demanding immediate wage revision of Casual Labourers. Accordingly 14 days legal notice for the strike was served on 28th June 2017. Entire employees of Tamilnadu Circle  (P3 , P4 , R3 , R4 , Admin , Postal Accounts , SBCO , GDS and Casual Labourers)  will go on strike for the cause of Casual Labourers declaring -- "an injury to one is an injury to all" !!!. As strike is declared , NFPE CCC decided to call off the fast in front of CPMG office and the mass fast ended at 5 PM on 28th June with thundering slogans.

The inspiring struggle of the most down trodden, marginalised and poor casual labourers of Tamilnadu will be written in red letters in the history of the struggles of Postal employees.

Red Salute to the NFPE / Confederation/ Casual Labour leaders and members who made it a historic struggle.

CENTRAL GOVT EMPLOYEES AGAIN BETRAYED BY NDA GOVERNMENT.
DATE OF EFFECT FROM 01-01-2016 AND RESTORATION OF RATE OF HRA DENIED
HOLD NATIONWIDE PROTEST DEMONSTRATIONS IN FRONT OF ALL OFFICES
NDA Government has once again betrayed the entire Central Govt Employees. The demand of the employees to restore HRA to 30, 20 & 10% is denied. Date of effect for allowances is fixed as 01-07-2017 denying 18 months arrears.

The BJP lead NDA Government deliberately delayed the legitimate right of the employees. The assurance given by Cabinet Ministers regarding increase in Minimum Pay and Fitment Formula  is also not honoured till date. NDA Government is the worst Government as far as employees and workers are concerned.

Confederation National Secretariat calls upon entire Central Govt Employees to hold demonstrations in front of all Central Govt Offices protesting against the anti-employees, anti-workers stand of the NDA Government.

Massive turn out of postal casual labourers and postal workers at the venue of Chief PMG office, Tamilnadu marked the beginning of indefinite fast by CHQ leaders of Postal Casual Labourers Federation today (27-06-2017) morning. The indefinite fast is for the single demand of implementation of DG orders on Casual labourers revision of wages in Tamil Nadu from 01-01-2006.

Indefinite fast called off on serving of Strike Notice by NFPE COC TN Circle !
On the face of CPMG going away from Chennai without meeting the leaders even after supplying proof of disbursement of arrears as per the orders of Directorate for implementation of revised wages of 6th CPC in Kerala & Andhra, the COC had no option but to serve strike notice.

Accordingly a strike notice was served on the Chief PMG for a strike of Postal Employees of Tamilnadu on 13th July.

Now the focus is on campaigning for the success of strike to win implementation of directorate orders for 6th CPC wages order to casual labourers in TN Circle. The indefinite fast by CHQ leaders under the leadership of Comrade M Krishnan (SG Confederation) is a new history in the movement of casual workers. 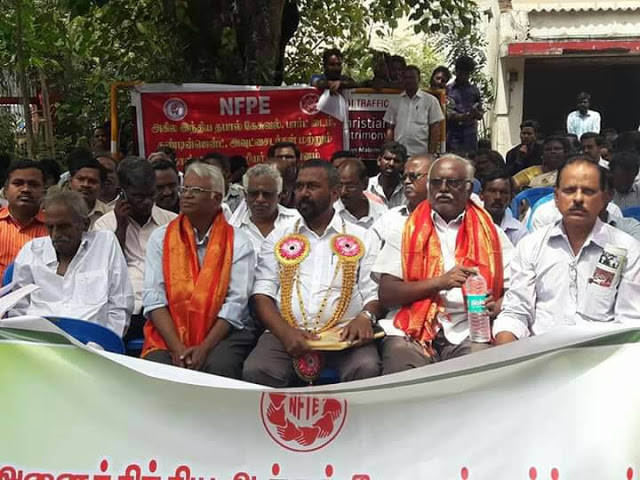 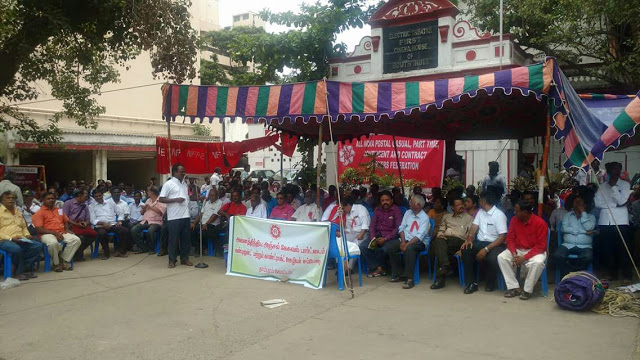 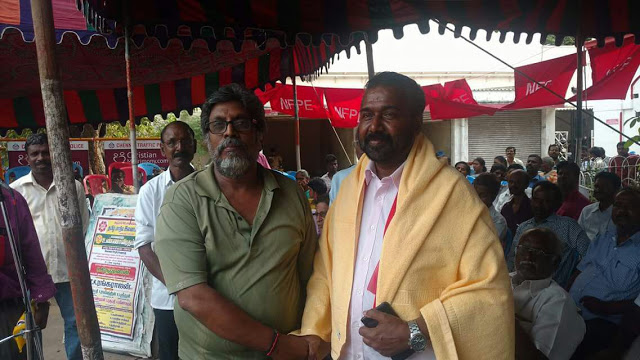 
Please the above report regarding the indefinite fast  commenced by leaders of Casual Labour Federation at Chennai along with NFPE Tamilnadu Circle leaders. All units are requested to organize lunch hour demonstration in support of the struggle.


Secretary General
NFPE
Posted by NFPE at 11:50 AM No comments:

Massive mobilization at the venue of indefinite fast headed by Com.M.Krishnan, SG, Confederation

A massive turn out of postal casual labourers and postal workers at the venue of Chief PMG office, Tamilnadu marked the beginning of indefinite fast by CHQ leaders of Postal Casual Labourers Federation today (27-06-2017) morning. The indefinite fast is for the single demand of implementation of DG orders on Casual labourers revision of wages in Tamil Nadu from 01-01-2006.

On seeing the most unjustified stand of Circle Administration that denies to revise wages of casual labourers on the basis of 6th and 7th CPC wages as ordered by Department of Posts. The CHQ in its CWC decided to undertake indefinite fast by CHQ leaders under the leadership of  Com. M.Krishnan (CHQ President), Comrades P. Mohan (CHQ G/S), Y.Nagabhushanam (Wkg. President CHQ), D.Sivagurunadhan (CHQ Treasurer), and S. Balamurugan (CHQ OGS)  as well as comrades J.Ramamurthy (President P3 CHQ), B.Parandhaman (NFPE CoC President), G.Kannan (Convener, NFPE CoC), also in the indefinite fast along with Comrade Krishnan.

Com. M.Duraipandian COC, G/S, Tamilnadu  inaugurated and several leaders of Confederation affiliates too graced the agitation. The important point to be highlighted is that the programme was held despite the negative stand of denial of permission to the indefinite fast by Circle Administration.
Posted by NFPE at 11:48 AM No comments:

1.    All General Secretaries of NFPE will consult with Circle leaders and if any   change is required can make suitable change.
2.   Leaders whose names are given should compulsorily attend the meeting.
3.   Circle Secretaries of NFPE should take initiative to arrange the joint meeting.  They should consult each other and finalise the programme and arrange grand meetings.
4.   Maximum publicity should be given to campaign programme and maximum participation of employees should be ensured.
5.   Circle Unions / Divisional Unions should make maximum effort to make the strike a grand success.  Joint campaign programme by Circle / Divisional Union Leaders may be organized in all Circles / Divisions.