PROMOTION AND POSTING FROM HAG TO HAG+ GRADE [MEMBER, PSB/ADDL DG COORD] OF IPOS OFFICERS (CLICK THE LINK BELOW TO VIEW THE ORDER)

DATE OF NEXT INCREMENT UNDER RULE 10 OF CCS (REVISED PAY) RULES, 2016- MOF CLARIFICATIONS

As you are aware that the 2nd wave of Corona has hit the country. More than two lakh cases of infection are coming every day. The Postal Department was declared as essential service during 1st wave of corona last year and during that period rendering services so many postal employees got infected, took treatment in private hospitals to save their life and full reimbursement was not made by the Department to such officials. So many employees were died being infected with this fatal disease. The Department had issued orders to pay compensation Rs. 10 lakh to the family of deceased employees but that was also rejected by Govt. of India. We had given suggestion to pay the compensation from the Circle welfare funds but that has not been materialized yet.

The employees of Postal Department are worst victim of this corona virus diseases as they have to come in regular contact with public. There are no measures to control the crowd in Post offices. There are no proper facilities to sanitize the offices and employees and public.

Our field staff i.e. Postmen and GDS staff, have to go to door to door to deliver the articles. Aadhar enabled payment service has caused more infection to staff Aadhar updation is also one of the major cause of infection.

In beginning of last year when corona started spreading the services and offices were run with reduced staff but after some time declaring the Postal services as essential services the whole staff was put on duty.

This is irony of the department that those who are more vulnerable were called on duty with full strength and in administrative offices, where employees are more safe than operative offices, roaster system with 50% duty was implemented.

Keeping in view all the above mentioned facts we would like to request you to cause necessary instructions on the below mentioned subjects to contain spread of corona virus and to save the life of poor postal employees.

1.      50% roaster duty system should be applied in all post offices and RMS offices.

3.      Sanitizing machine in Post offices and Hand sanitizers, masks should be provided to all staff.

4.      PPE kits should be provided to all delivery and field staff.

6.      Vaccination of all staff should be done on priority basis treating them as front line warriors,

7.      Full reimbursement of treatment of Covid disease should be made.

8.      Compensation Rs.10 lakh should be granted to the family of deceased employees.

9.      Compulsory compassionate appointment to one ward of the deceased.

It is therefore requested to kindly cause necessary action in this regard.

TRIBUTE TO BHARAT RATNA DR BABASAHEB AMBEDKAR ON HIS JAYANTI

GREETINGS AND BEST WISHES ON THE HOLY MONTH OF RAMZAN

DECLARATION OF BOHAG BIHU FESTIVAL AS HOLIDAY IN ASSAM 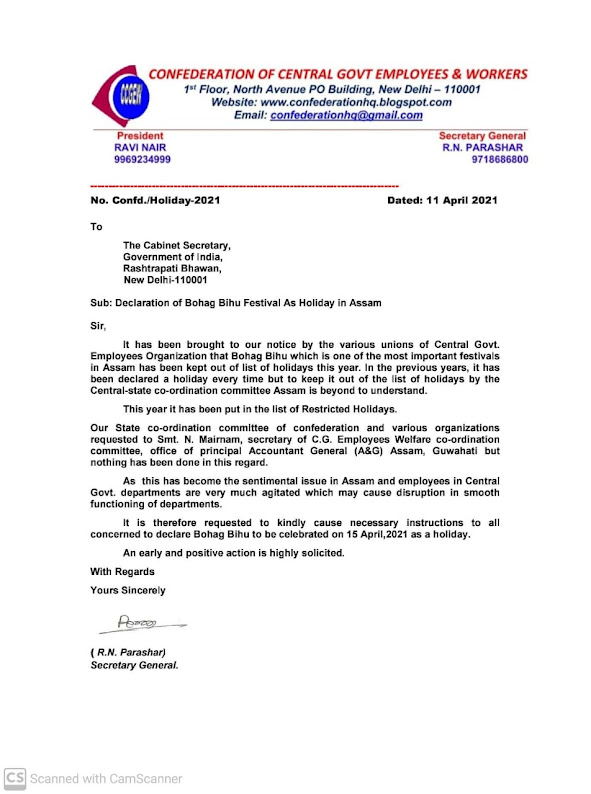 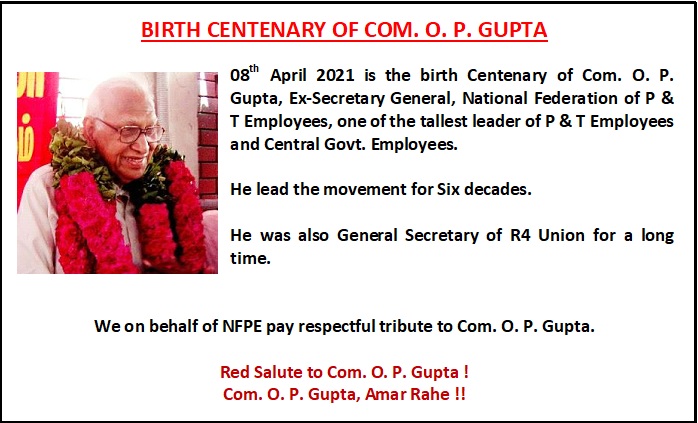 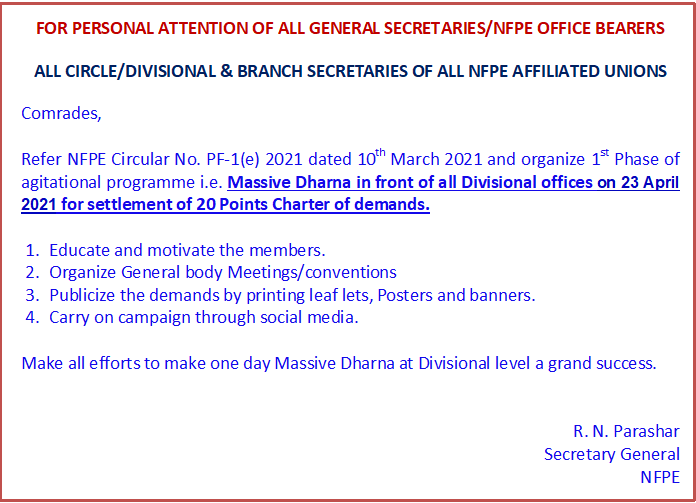 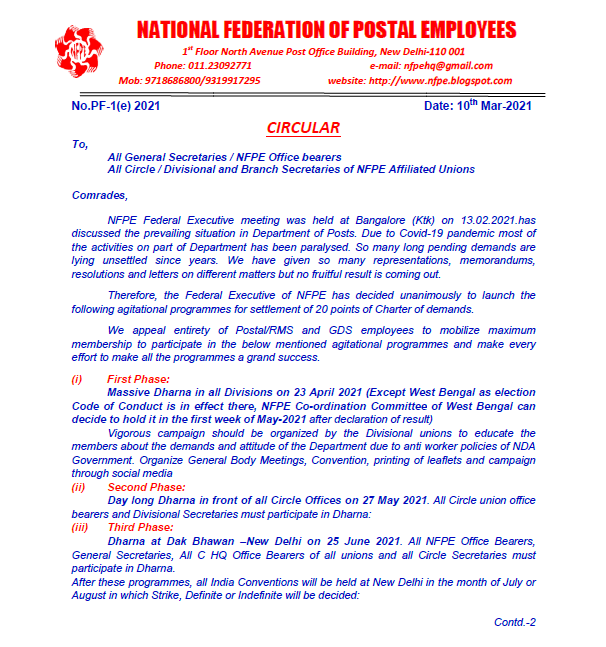 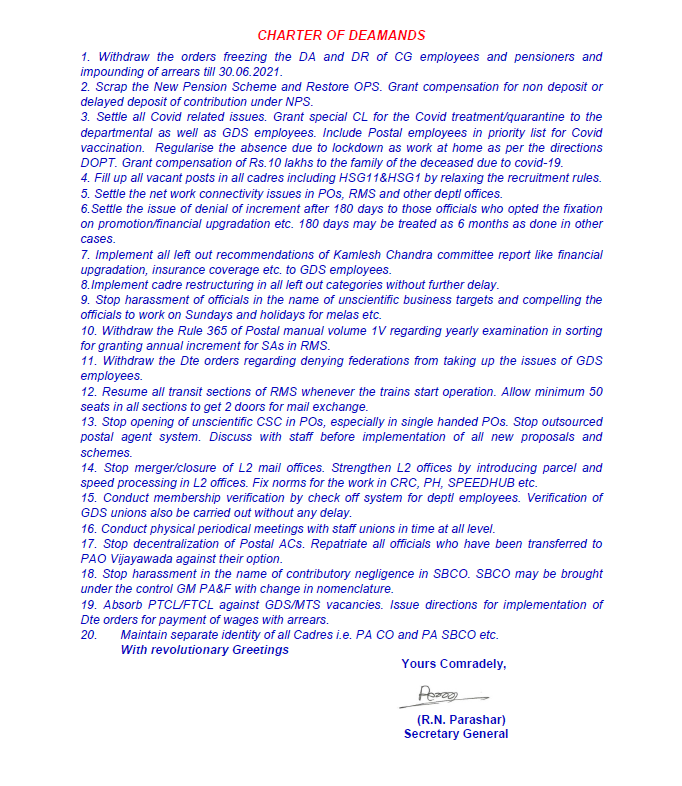 NFPE WRITES TO THE DEPARTMENT

Sub: - Verification of Membership for recognition of Service Associations under CCS (RSA) Rules-1993

It is to bring to your kind notice that the Membership Verification was conducted in the year 2015 and the result was declared in July-2019. In the letter No. 13/01/2015 dated 09th June-2015 in para No. 4 as referred above, it was clearly mentioned that “ the recognition of Service Associations granted as a  sequel to this exercise shall be valid for a period of 5 years from the date of issue of order granting recognition”.

According to it the 5 years period will expire in July-2024.

It is therefore, requested to kindly stop the process of verification as started vide Directorates No. 13-01/2020-SR dated 03.03.2020 and continue the recognition of Service Associations up to July-2024. In this connection our letter number even dated 04th March 2020 may also be referred.

It is further requested as the Membership Verification process for GDS was cancelled after completion of whole process, therefore it is requested to kindly cause orders for Verification of Membership for GDS Unions. 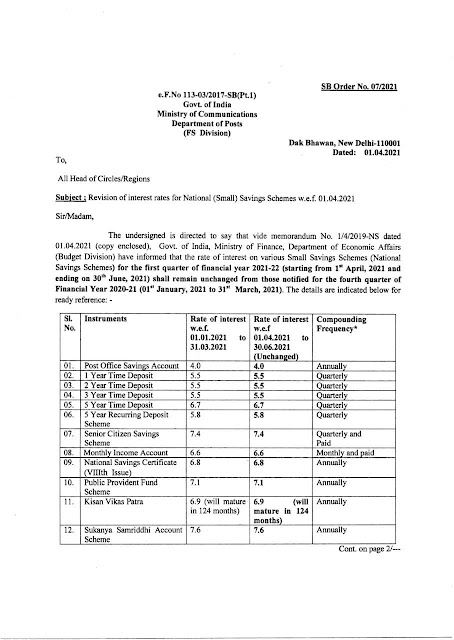 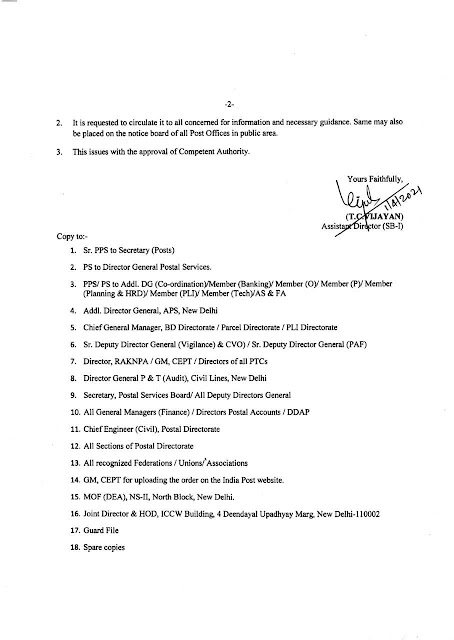 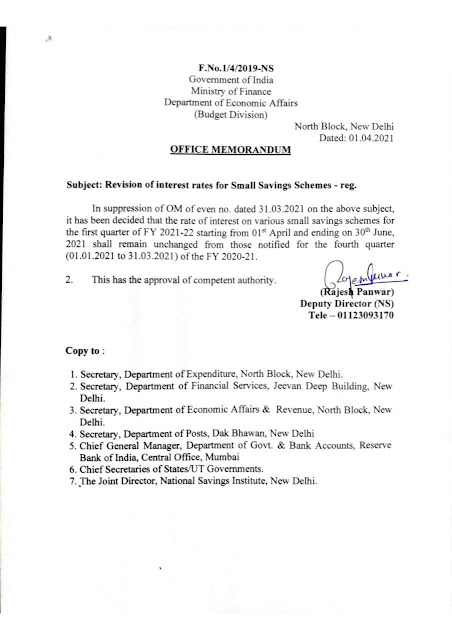 DECLARATION OF HOLIDAY ON 14TH APRIL,2021-BIRTHDAY OF DR. B.R. AMBEDKAR 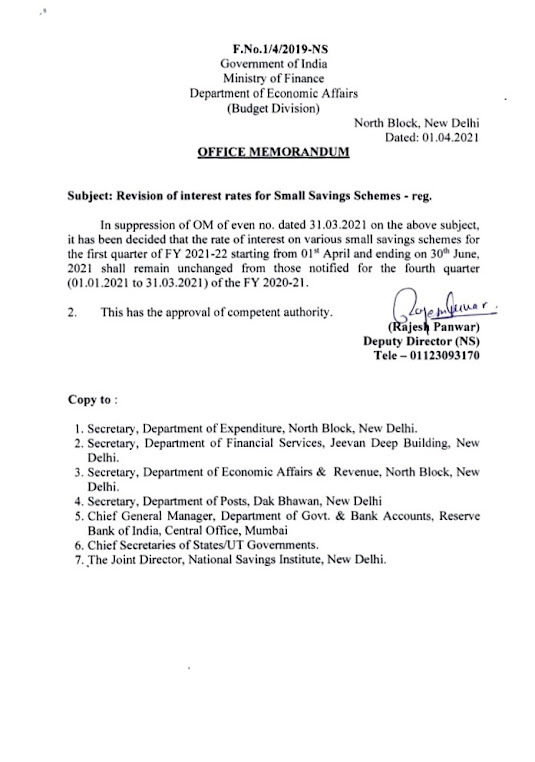 DoPPW has brought out the notification for regulating the service matters of Central Government employees covered under the National Pension System.

However, there were several service matters pertaining the NPS employees which were not covered by the PFRDA Act. Therefore, in order to streamline the implementation of NPS, DoPPW initiated the proposal for framing of separate service rules for NPS employees.

The present notification provides a detail guideline for processing various benefits /facility available to NPS employees such as compensation to be paid to the Government servant in case of delay in registration and credit of contributions to the NPS Account, Option for benefits under the CCS(Pension) Rules or NPS Rules in the event of death or disability of Government servant during service, Benefits payable on retirement on superannuation, premature retirement, voluntary retirement, absorption in autonomous body or PSU, etc.

Earlier the benefits of invalid pension, family pension on death during service, disability pension and extraordinary family pension were extended to NPS covered Government employees at par with the employees appointed before 01.01.2004, vide DoPPW’s O.M. No. 38/41/06-P&PW(A) dated 05.05.2009. Thereafter, the benefits of Retirement Gratuity and Death Gratuity have also been extended to all Central Government employees covered by National Pension System vide DoPPW’s order dated 26.08.2016 on the same terms and conditions as are applicable under CCS(Pension) Rules.Source:   PIB

The other terms & conditions of empanelment shall remain unchanged.

Minutes of the Standing Committee meeting held on 26/02/2021

COVERAGE UNDER CENTRAL CIVIL SERVICES (PENSION) RULES, 1972 OF THOSE CENTRAL GOVERNMENT EMPLOYEES WHOSE SELECTION FOR APPOINTMENT WERE FINALIZED BEFORE 01.01.2004 BUT JOINED GOVERNMENT SERVICE ON OR AFTER 01.01.2004 - EXTENSION OF CUT-OFF DATES(31/03/2021)