The programme commenced with the flag hoisting . National Flag was hoisted by Com. M. Krishnan Secretary General Confederation of CGE&W and Ex. Secretary General NFPE. The NFPE Flag was hoisted by Com. Giriraj Singh President NFPE. After that homage was paid to the martyrs by offering flowers at martyr’s column by all leaders /Gusts and delegates.

In the forenoon CWCs of all affiliates i.e. P-III, P-IV,R-III, R-IV, Admn, Postal Accounts, SBCO & GDS were held  at the same venue which were addressed by Com. M. Krishnan Ex. Secretary General NFPE & Secretary General Confederation & by Com. R.N. Parashar Secretary General NFPE. It was also a historic event that at the same time and same venue the CWCs of all affiliates were held and addressed by all the leaders.
In the afternoon Open Session and Trade Union Seminar was held. Reception Committee welcomed & honoured all the leaders and Guests. Com. R D Purohit Working Chairman of Reception Committee & Circle Secretary P-III Gujarat delivered welcome speech. Com. R N Parashar Secretary General NFPE delivered introductory speech about the Diamond Jubilee Celebrations held throughout the country after commencement from New Delhi on 24.11.2013.

Open Session was inaugurated  by Com. Sukomal Sen, Vice President , CITU and AISGEF . In his inaugural address Com. Sokomal Sen elaborately described the issues related to working class and policies of Central Govt. He stated that the present Govt. is totally pro-capitalist and anti working class and unleashing the onslaughts in various forms after coming in power contrary to the promises made by the Prime-minister Sri Narendra Modi during his speeches delivered in election campaign. He told that for the betterment of working class and to achieve their legitimate rights united struggle is only the way. So it is the need of the hour that all the workers should unite and fight against anti worker and anti people policies. The Trade Union Seminar and open session was also addressed by Shri Hiranmay Pandya, National Vice President B M S  who also criticized the anti Labour policies of Central Govt. which is evident from the recent various labour amendments  and he assured that BMS will fight all these anti worker and anti people policies unitedly with all Central Trade Unions.

The open session was also addressed by Shri Neelesh, son of Dwarka MLA Shi Pabhubha Manek who welcomed all participants and conveyed his best wishes for the success of the programme.

Com. Shiv Gopal Mishra, Secretary Staff Side National Council JCM, General Secretary AIRF. And Vice President HMS elaborately described all the issues to Central Govt. Employees and 7th CPC. He stated that the policies of Central Govt.  are not in favour of Working Class. He stated that in the convention of all constituents of N.C. JCM which is to be  held on 11th December, 2014 in Delhi, a programme of action will be decided to resist   the onslaughts on Central Government employees  and workers. He told that the Government is not ready to grant DA merger, Interim Relief and inclusion of GDS in 7th CPC alongwith some other demands. On the GDS issues he told very categorically that this demand will not be left unsettled.

In this Open Session and Trade Union Seminar the messages from Dr. G. Sanjeeva Reddy All India President  INTUC , Com.Gurudas Das Gupta General Secretay AITUC Shri Harbhajan Singh Sidhu, General Secretary HMS and Com. V A N Namboodri, Patron, BSNL Employees Union were read by Com. R.N. Parashar Secretary General NFPE, who conveyed their best wishes on this occasion as they could not participate in the same due to some pre-engagements.
The Session was presided by Com. Giiriraj Singh President, NFPE and Vote of thanks was given by by Com. Asha Ben Joshi General Convenor  Reception Committee &  Circle Secretary GDS Union (NFPE) Gujarat Circle.
On 24th November, 2014  a Seminar was held on the subject “ India Post –Challenges and Opportunities” Shri S.K. Sinha , Member, HRD Postal Services Board , New Delhi was present as Chief Guest and he presented the Key Note address on the  subject. He elaborately described the challenges and Opportunities before the Department. Shri Ram Bharosa PMG Rajkot Region, Gujarat also addressed the seminar. The Reception Committee honoured both the officers by presenting flowers bouquets, shawls and mementos. Welcome address was given by Com. S.K. Vaishnav, Circle President P-III Gujarat Circle.
The session was presided by Com. R.N. Parashar, Secretary General NFPE and Vote of thanks was given by Com., RD Purohit Working Chairman, Reception Committee.

The following Ex. Circle leaders of NFPE Union Gujarat Circle were also honoured by the Reception Committee in Diamond Jubilee Celebrations on 24.11.2014:

The session was concluded by the Vote of thanks given by Com. R.N. Parashar on behalf of NFPE and Com. R.D. Purohit on behalf of Reception Committee. 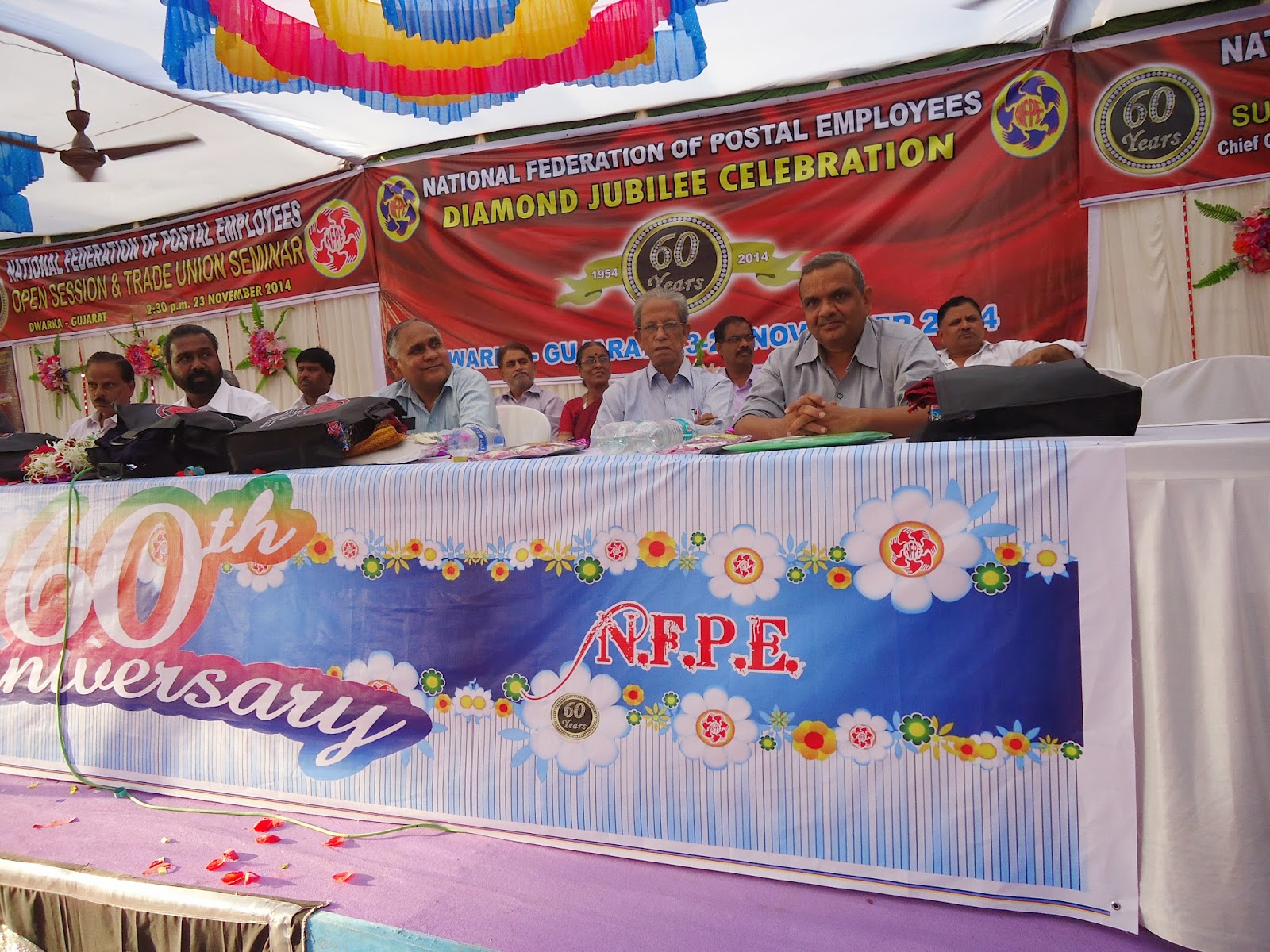 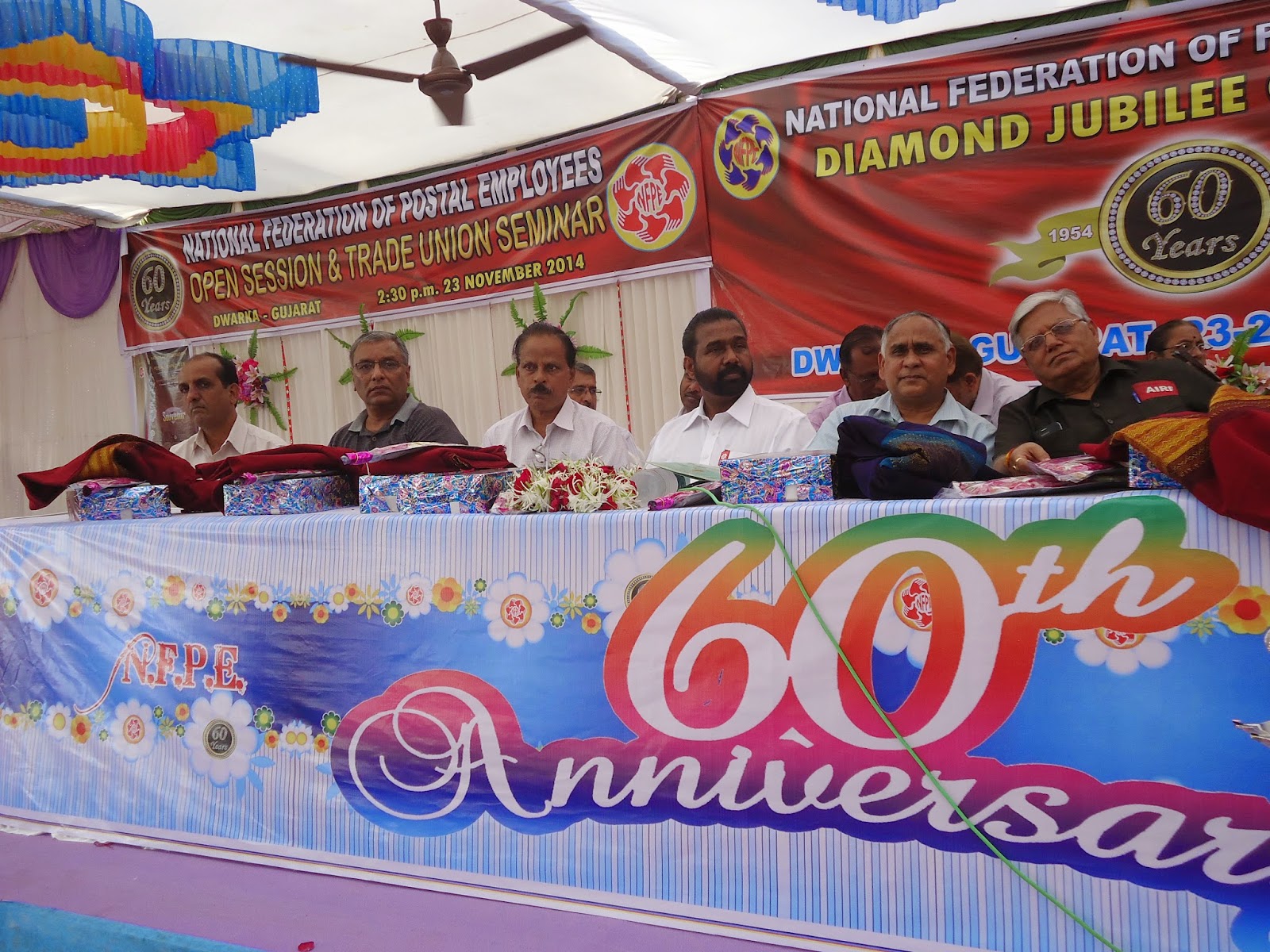 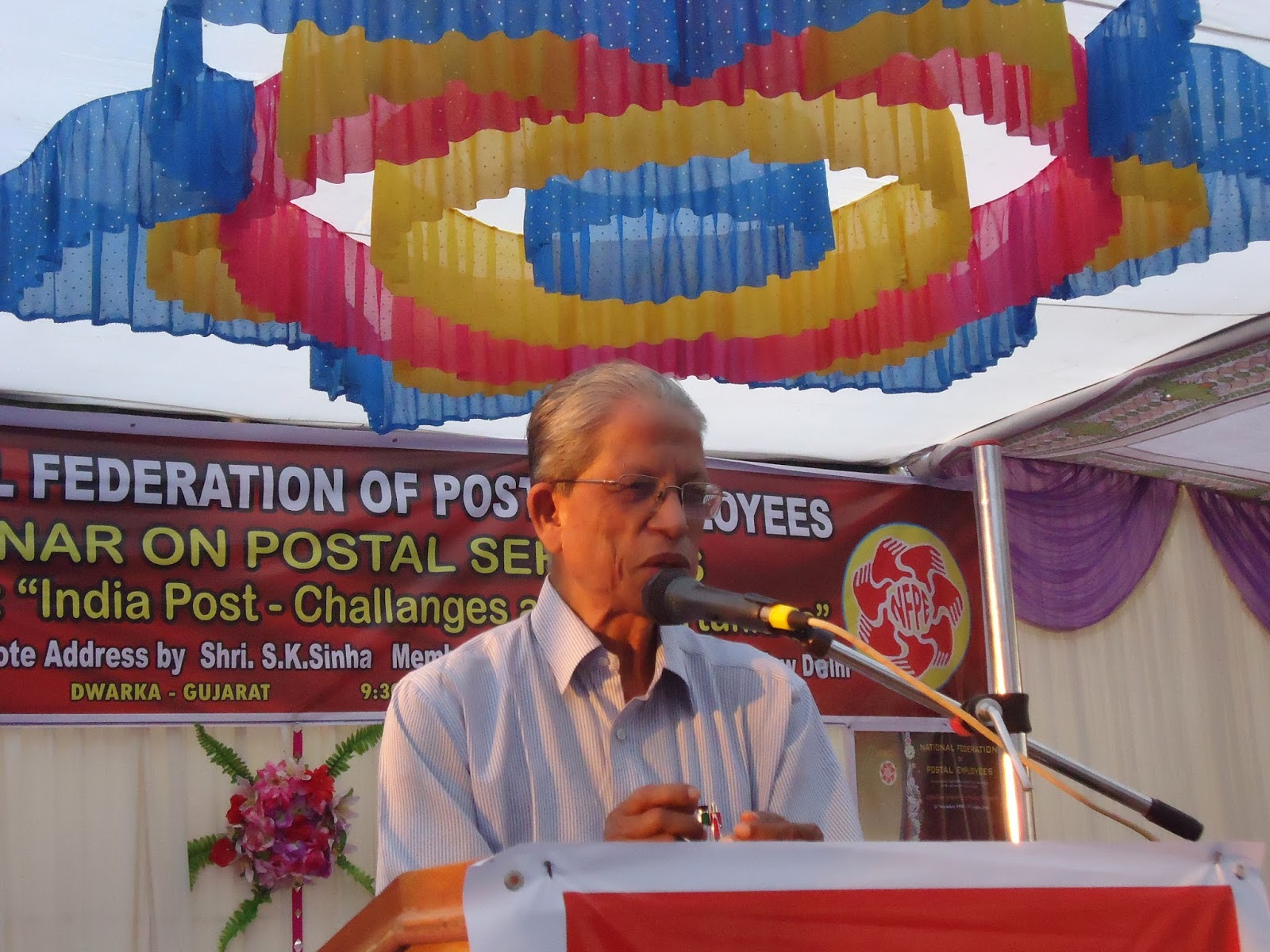 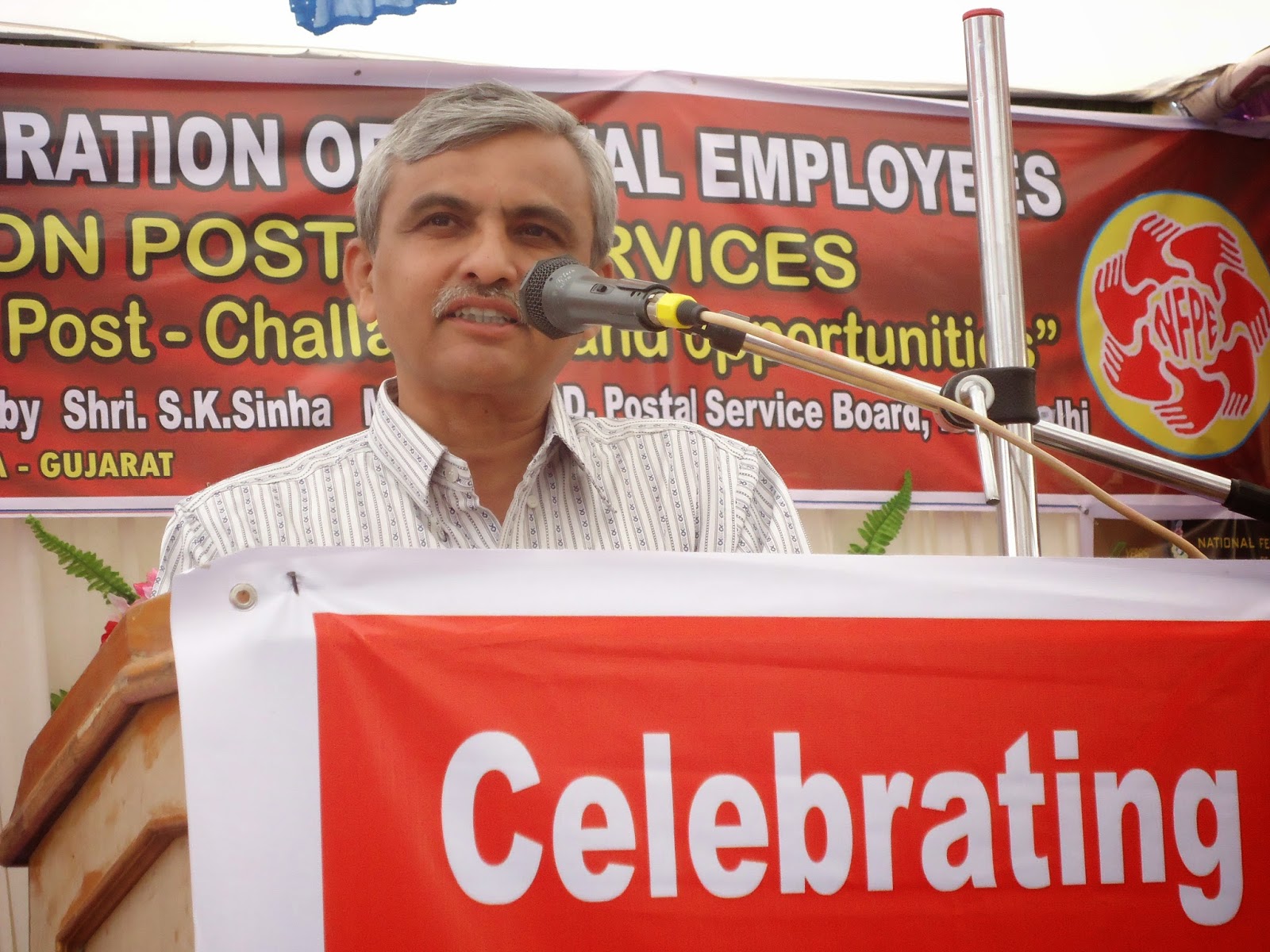 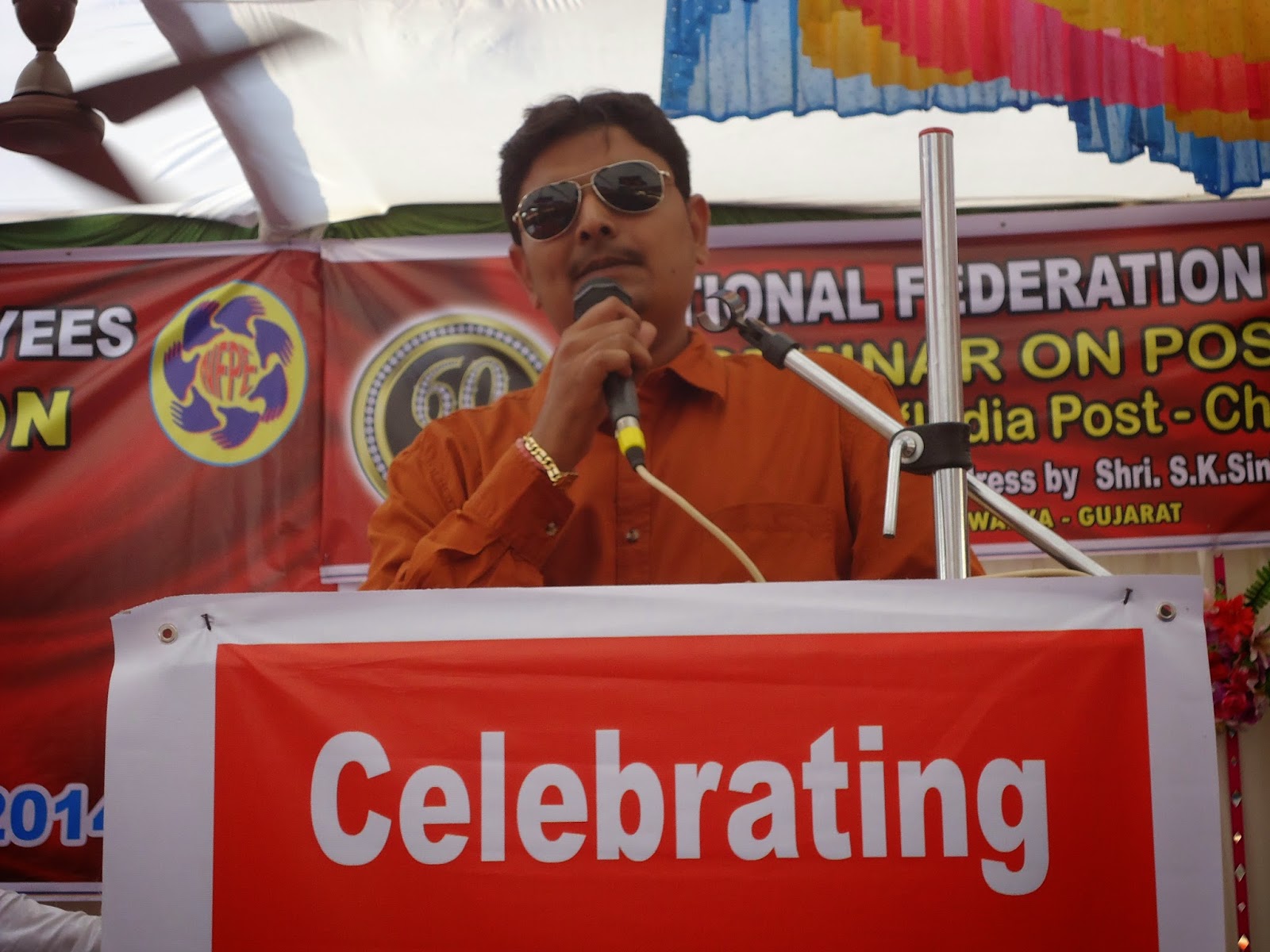 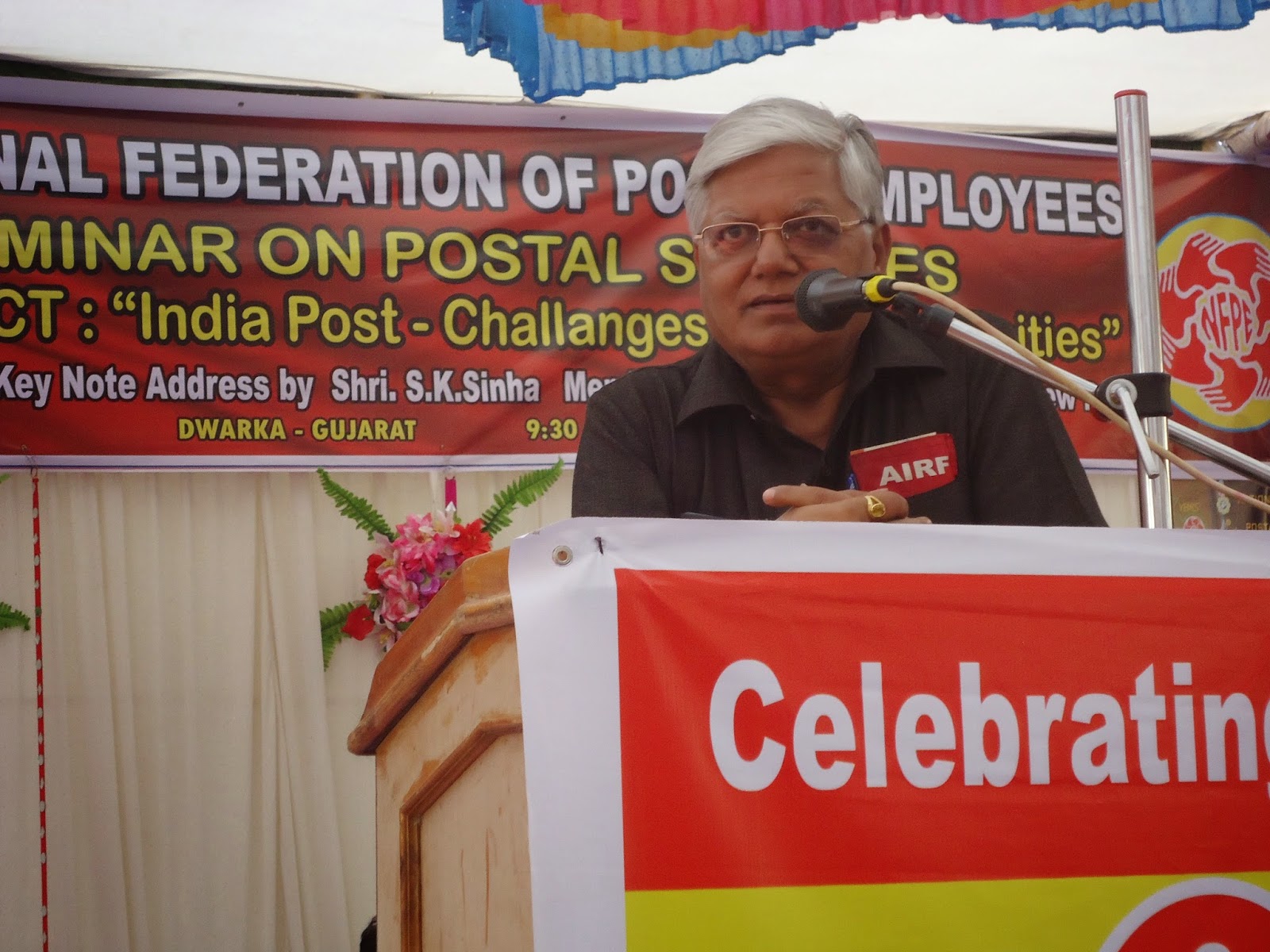 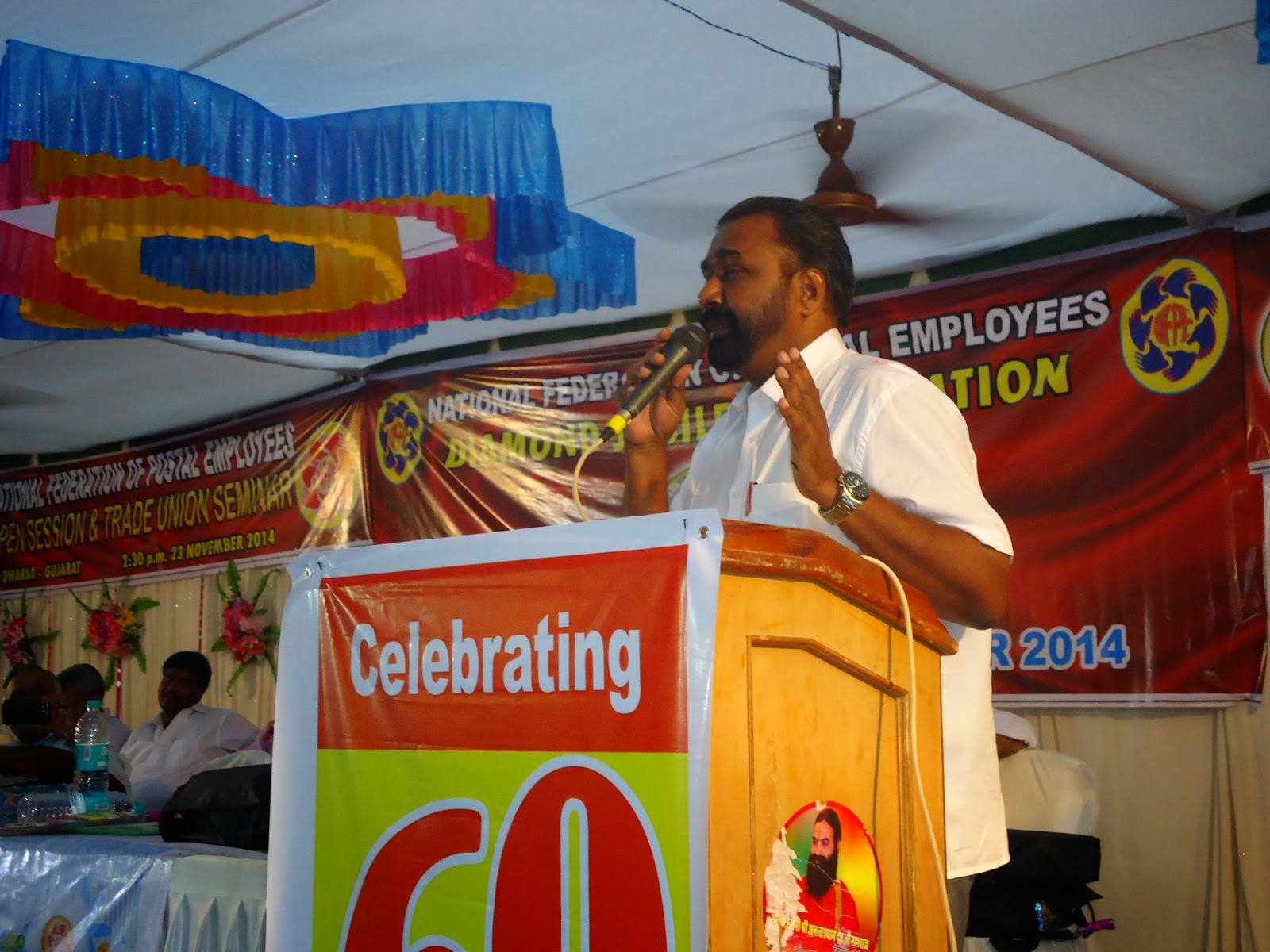 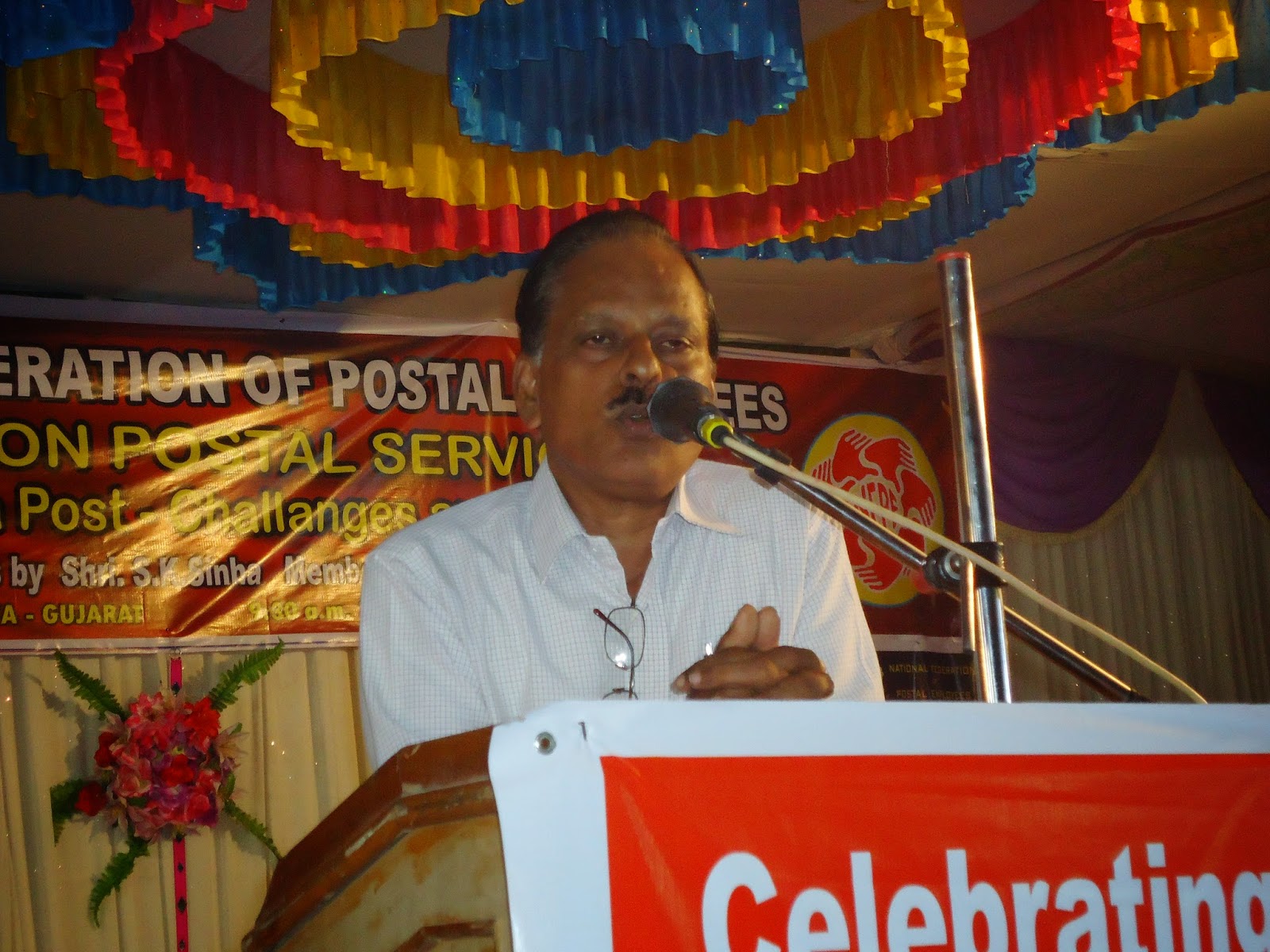 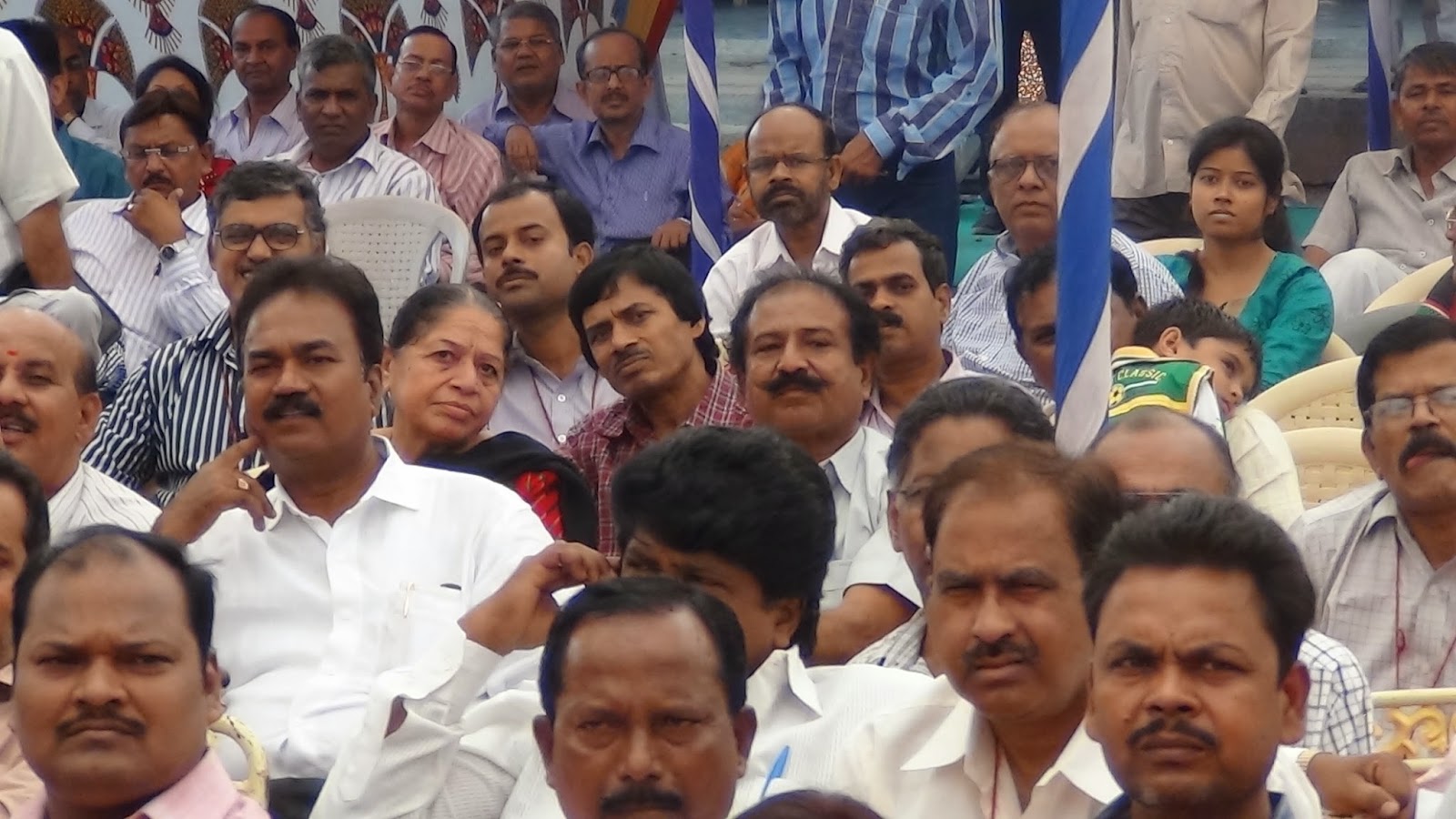 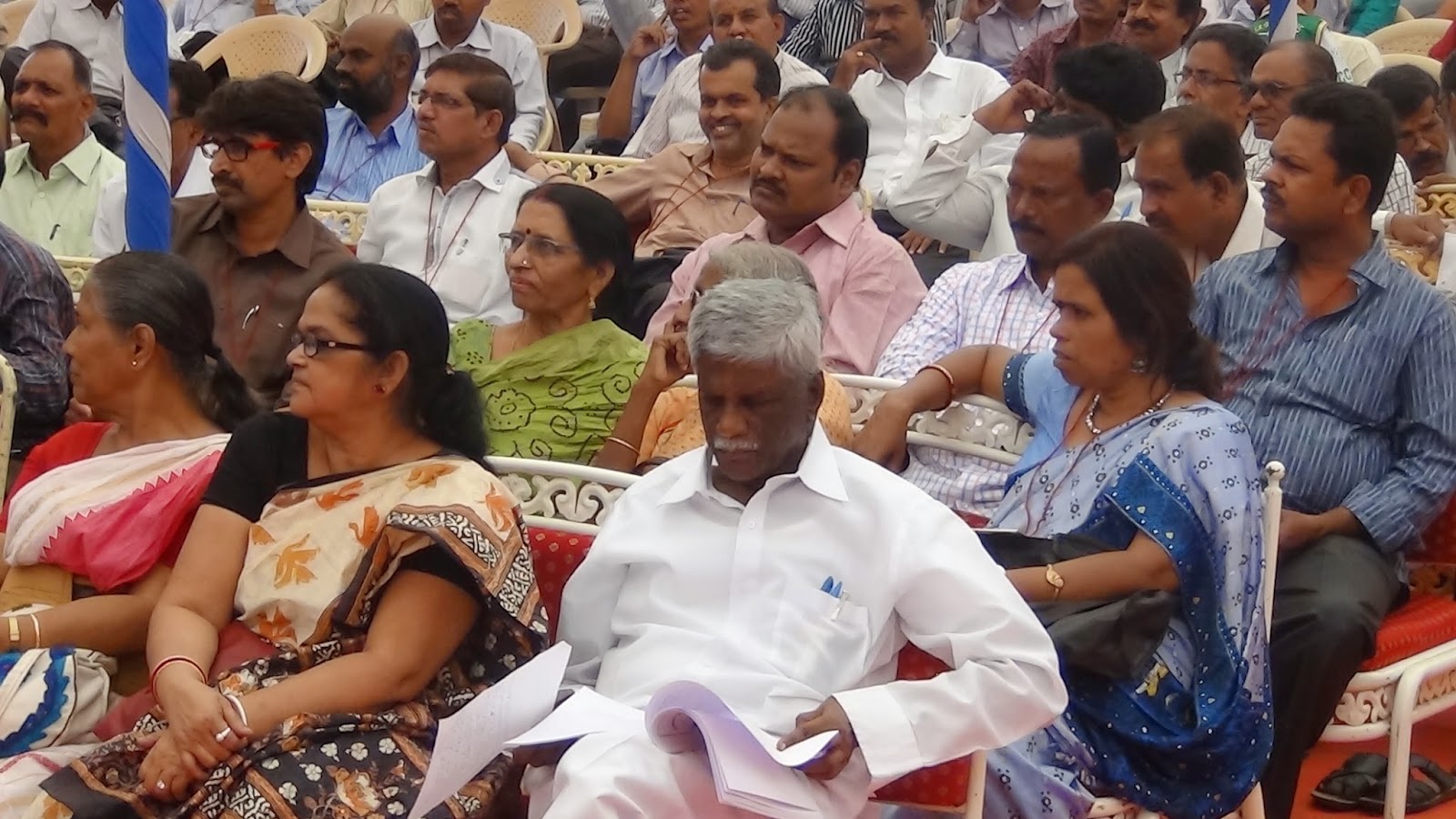 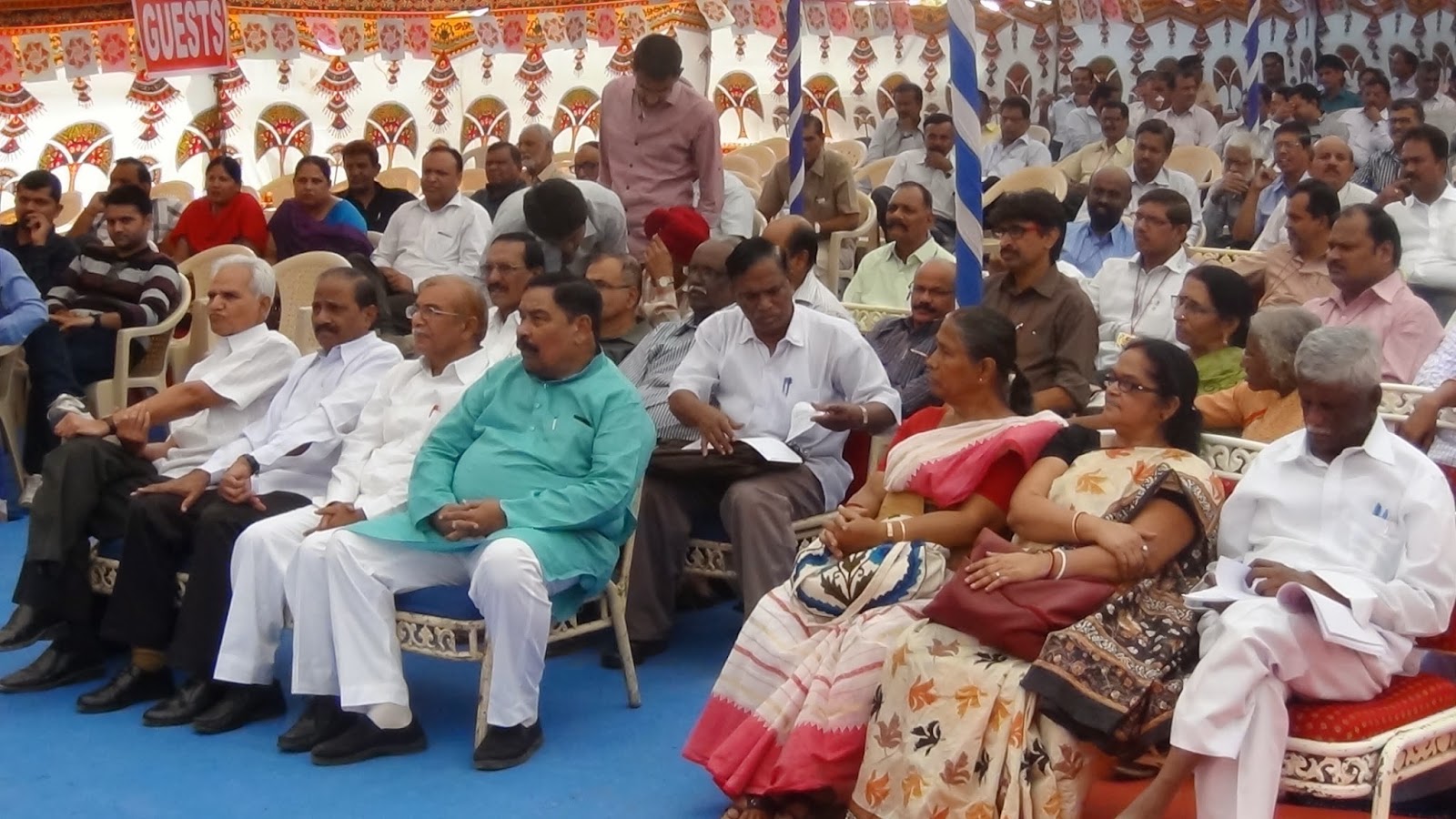 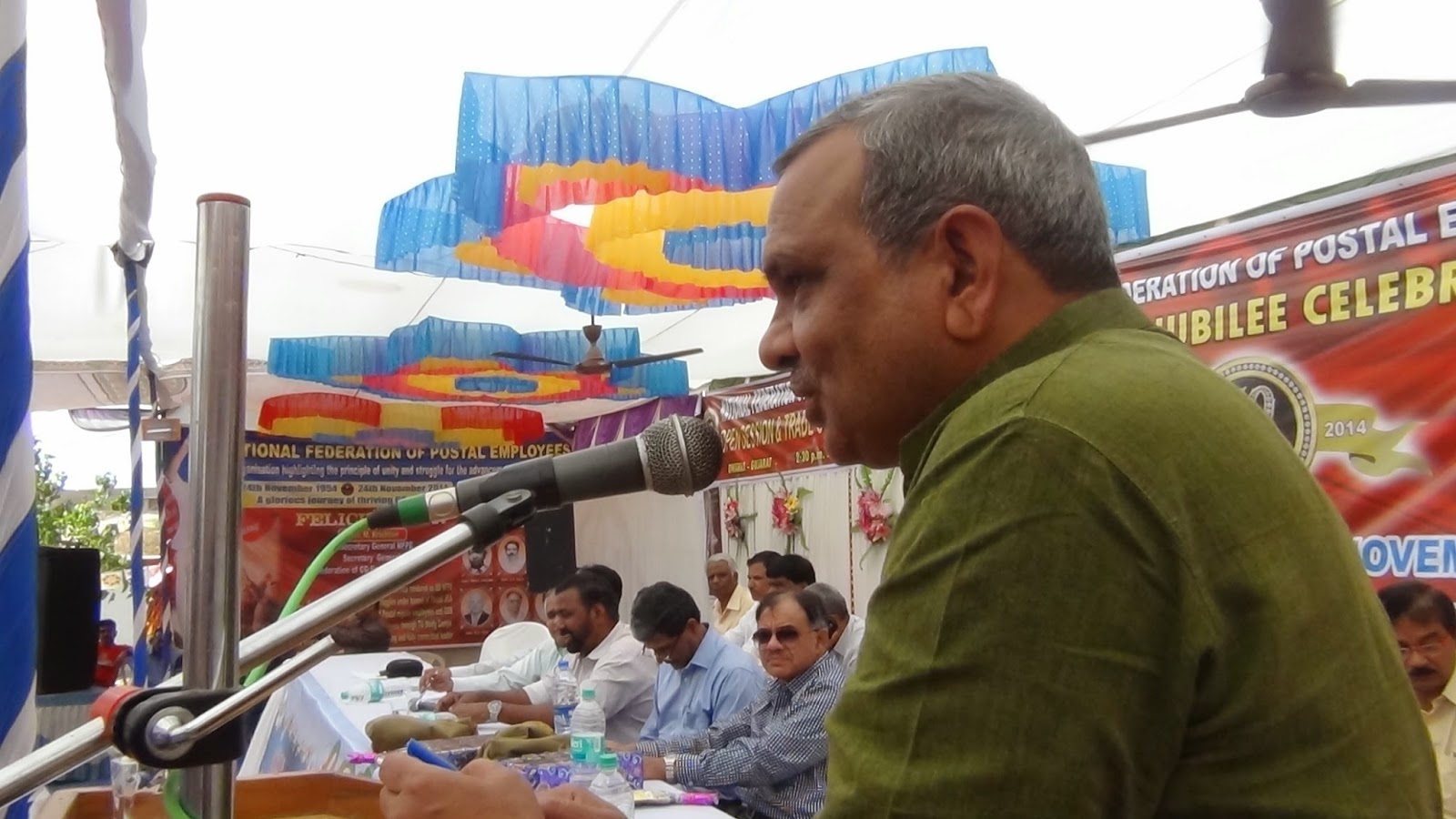 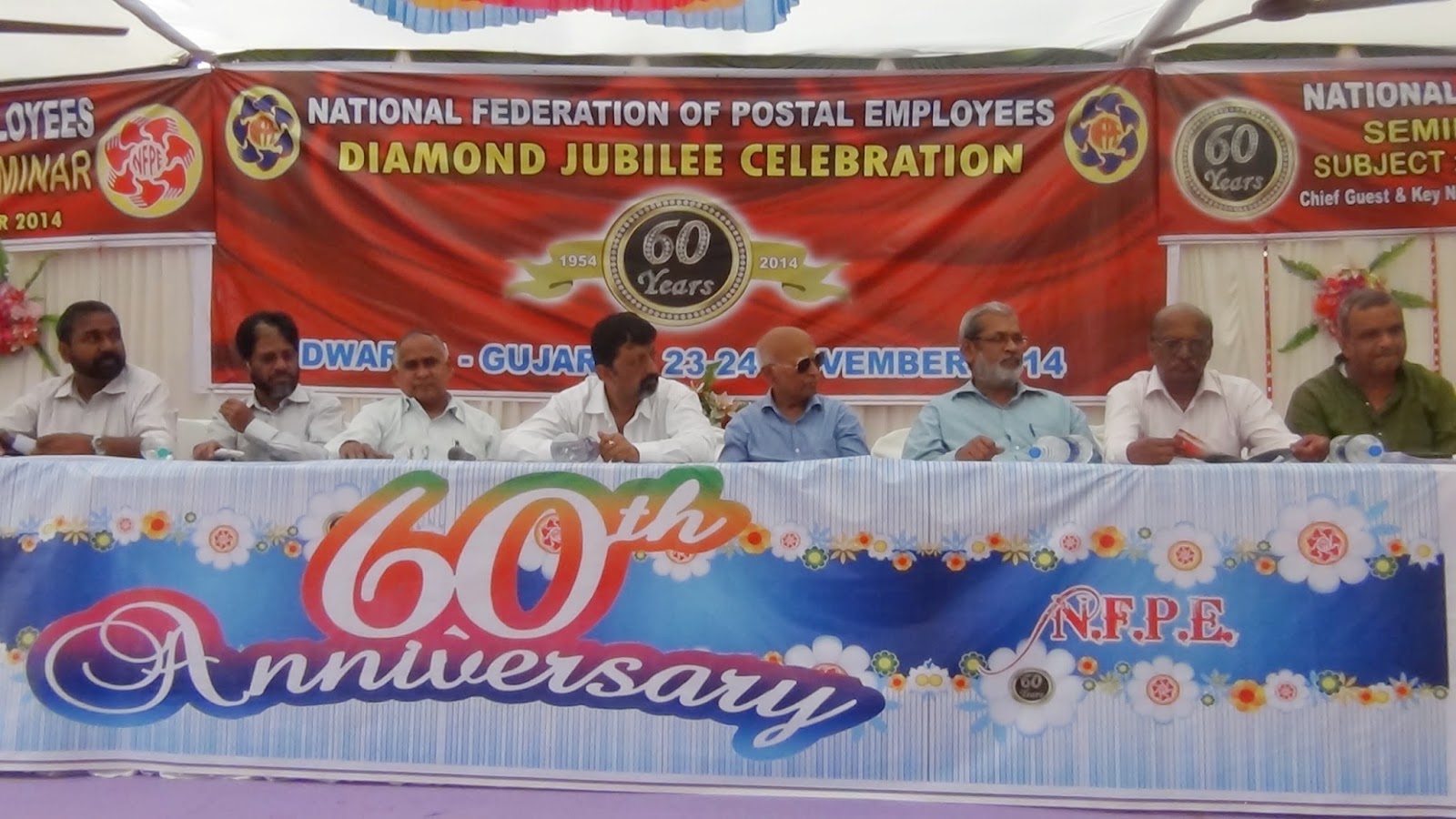 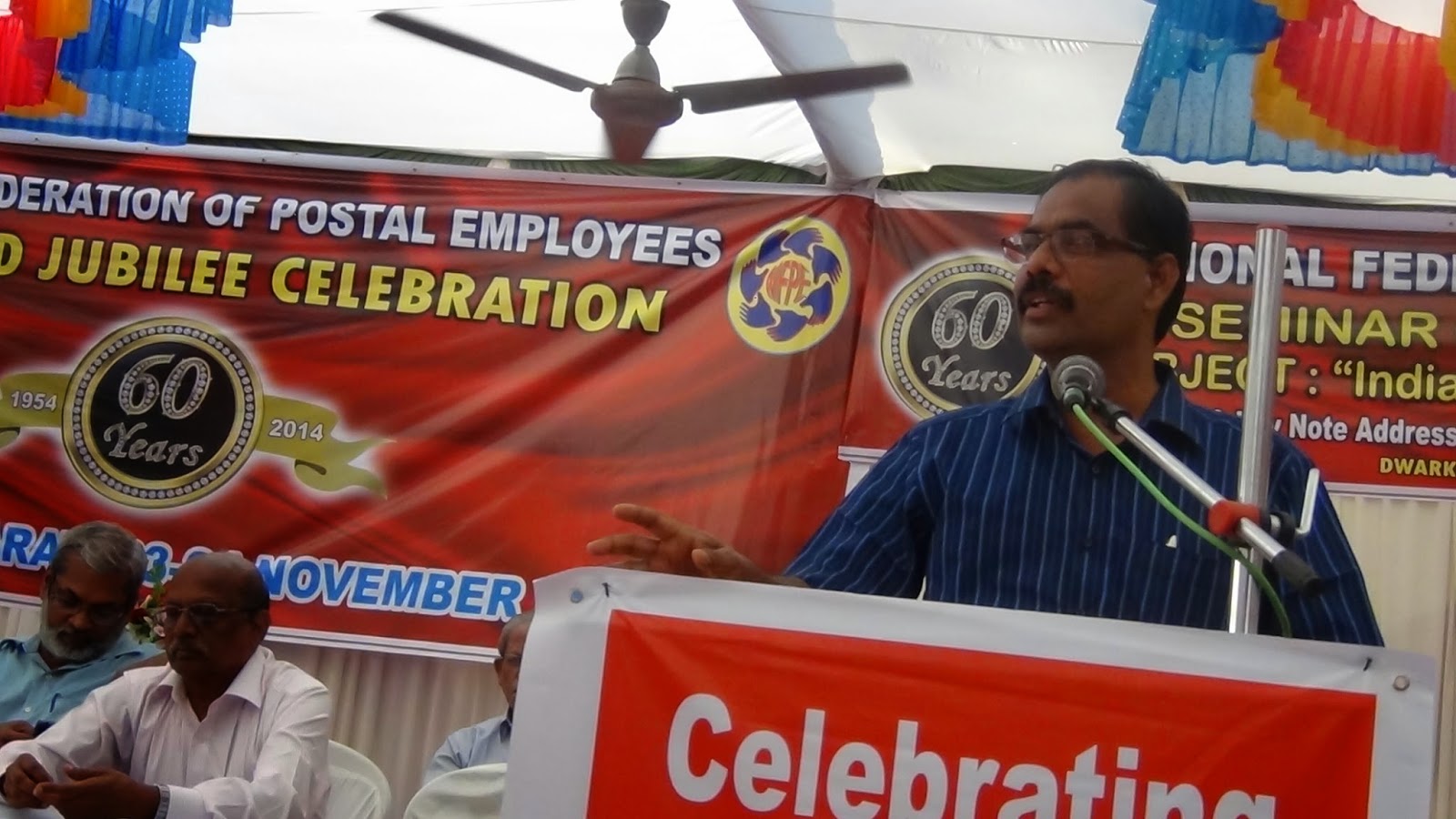 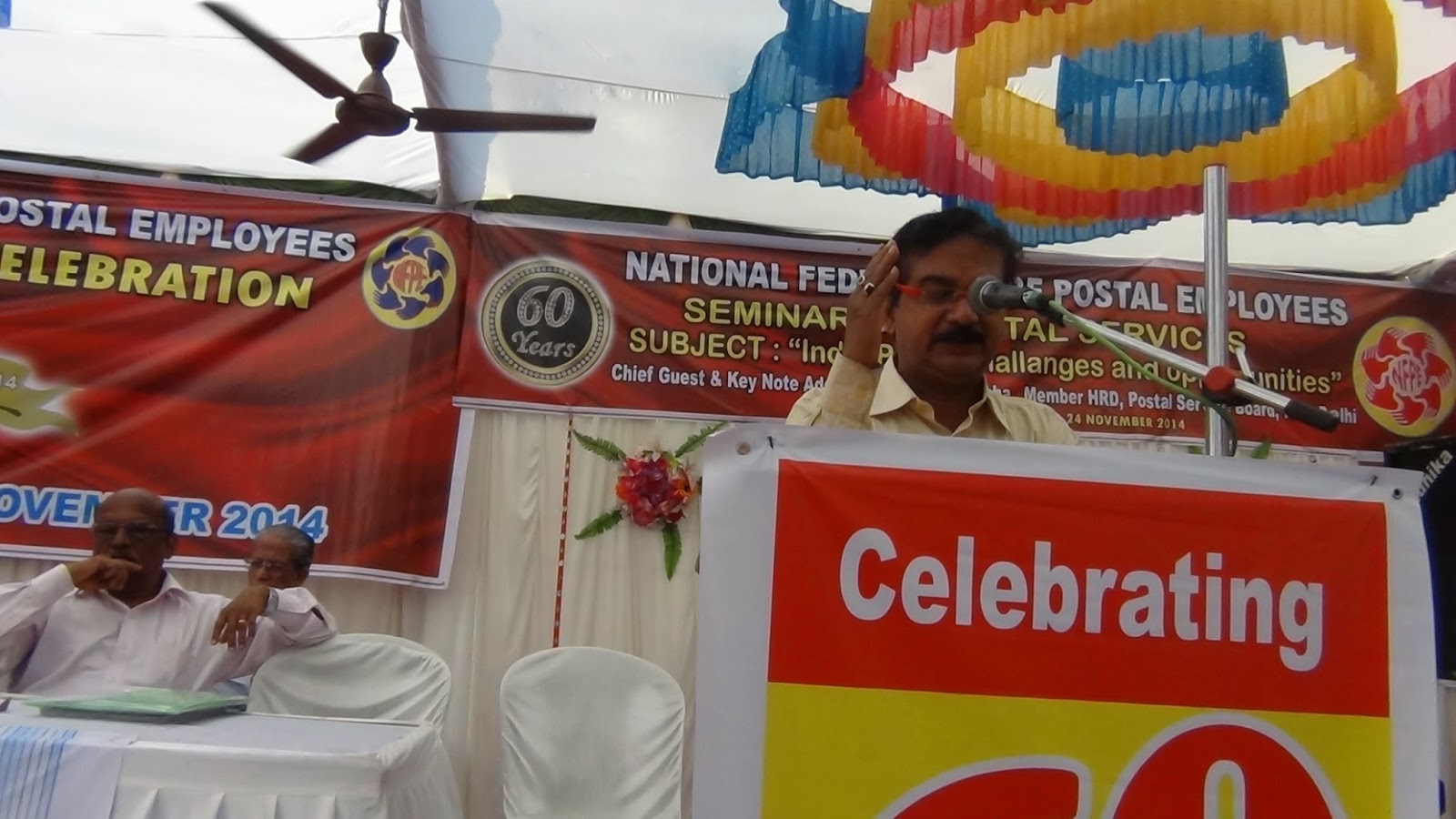 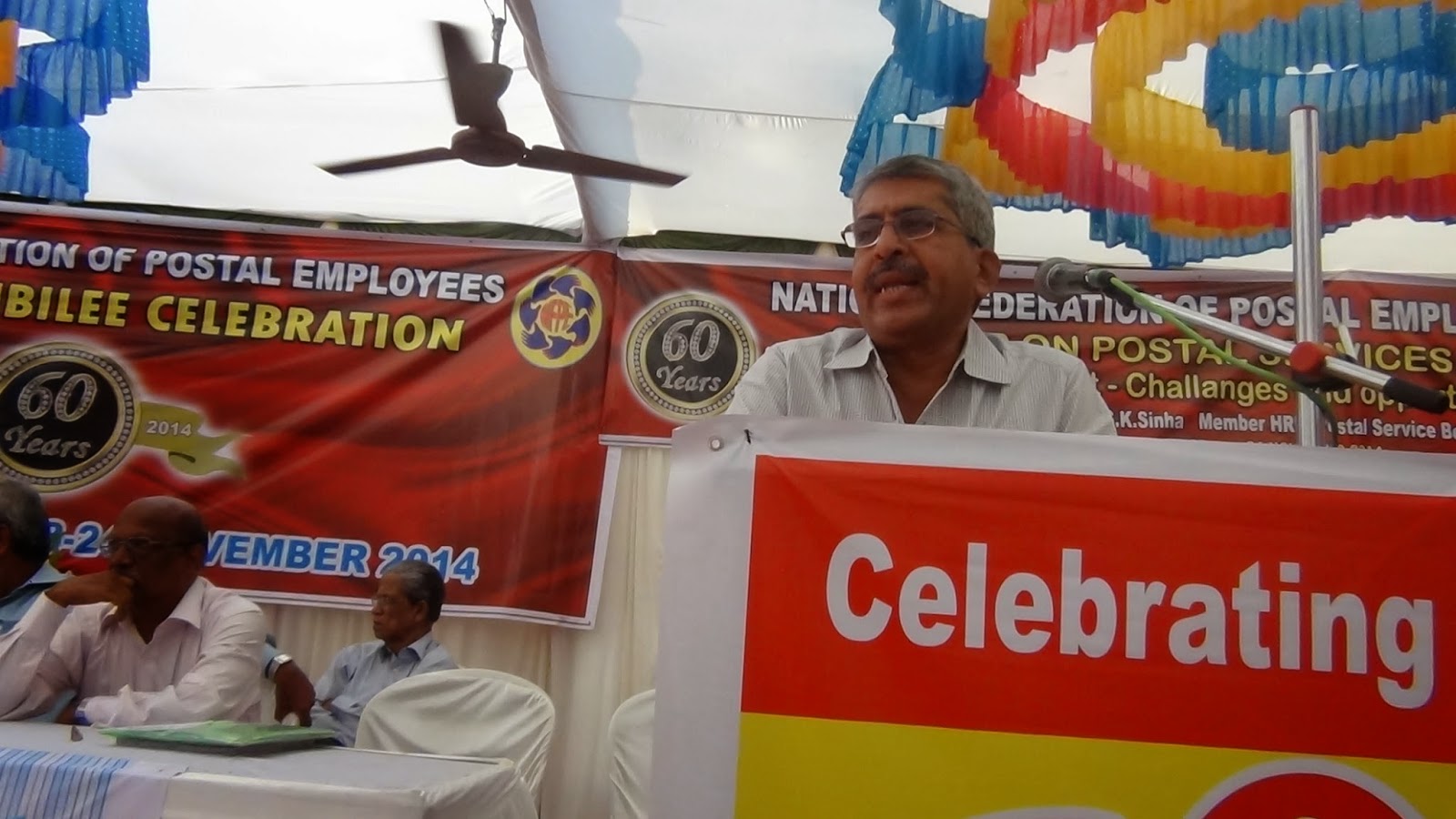 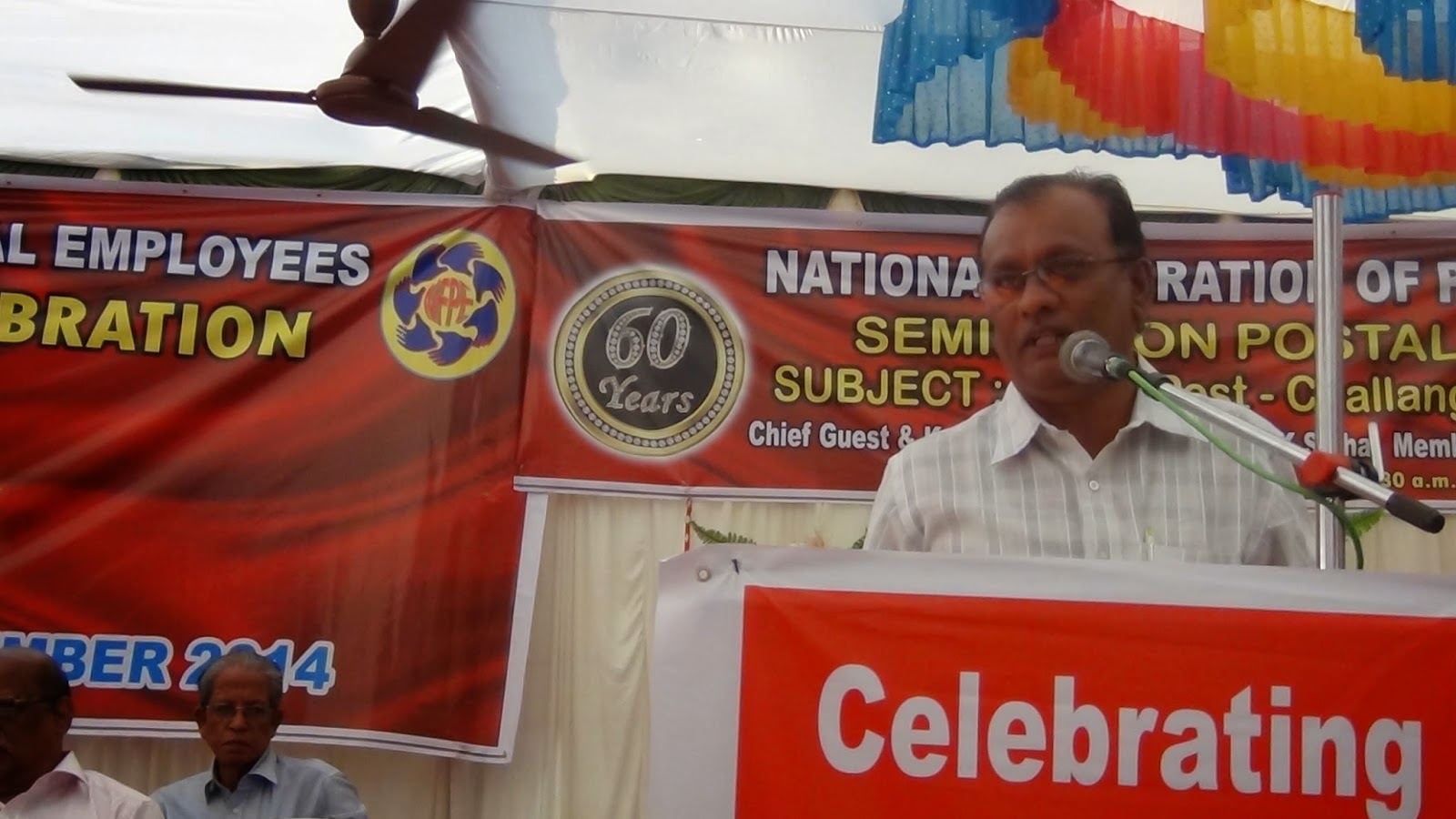 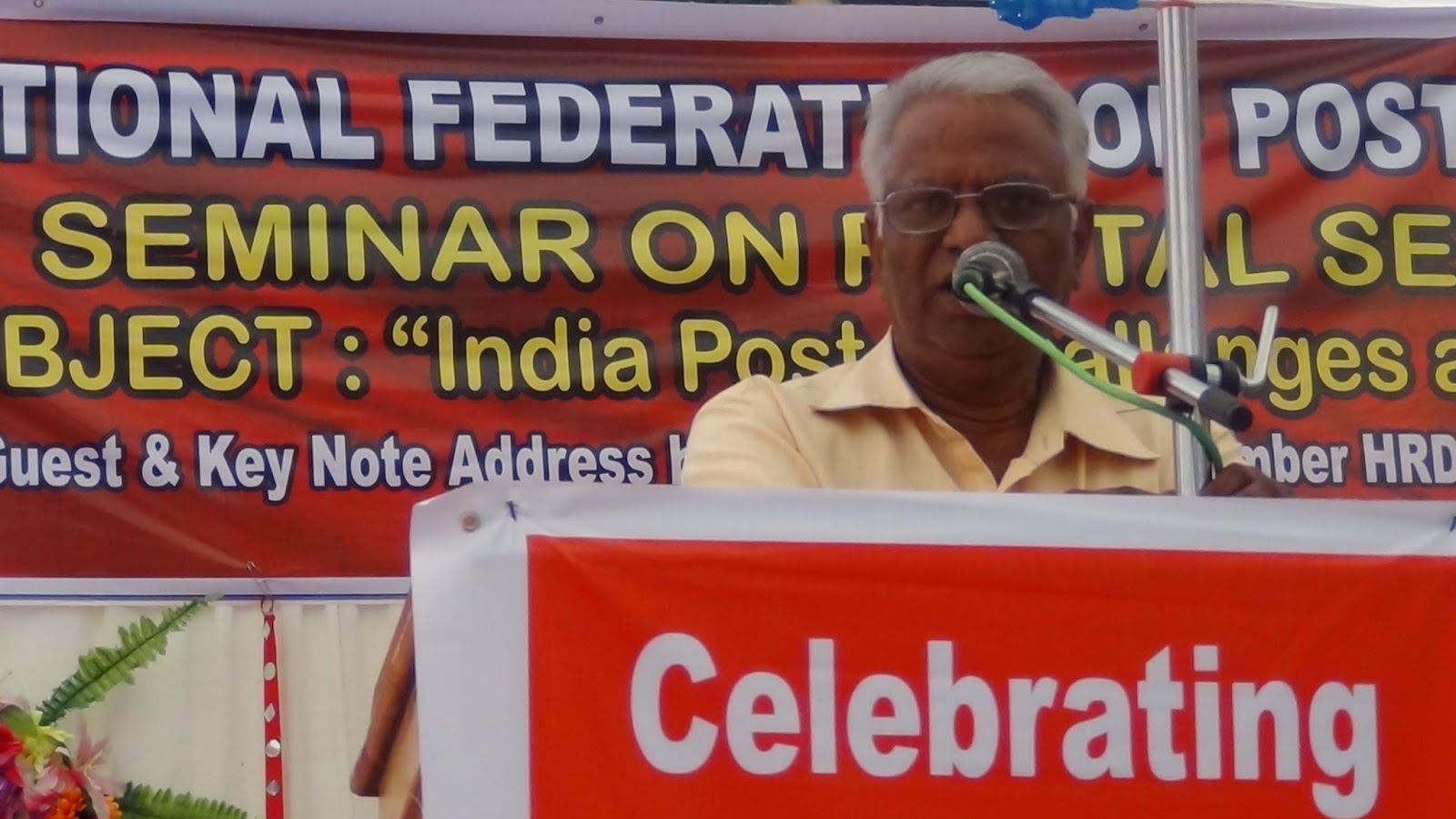 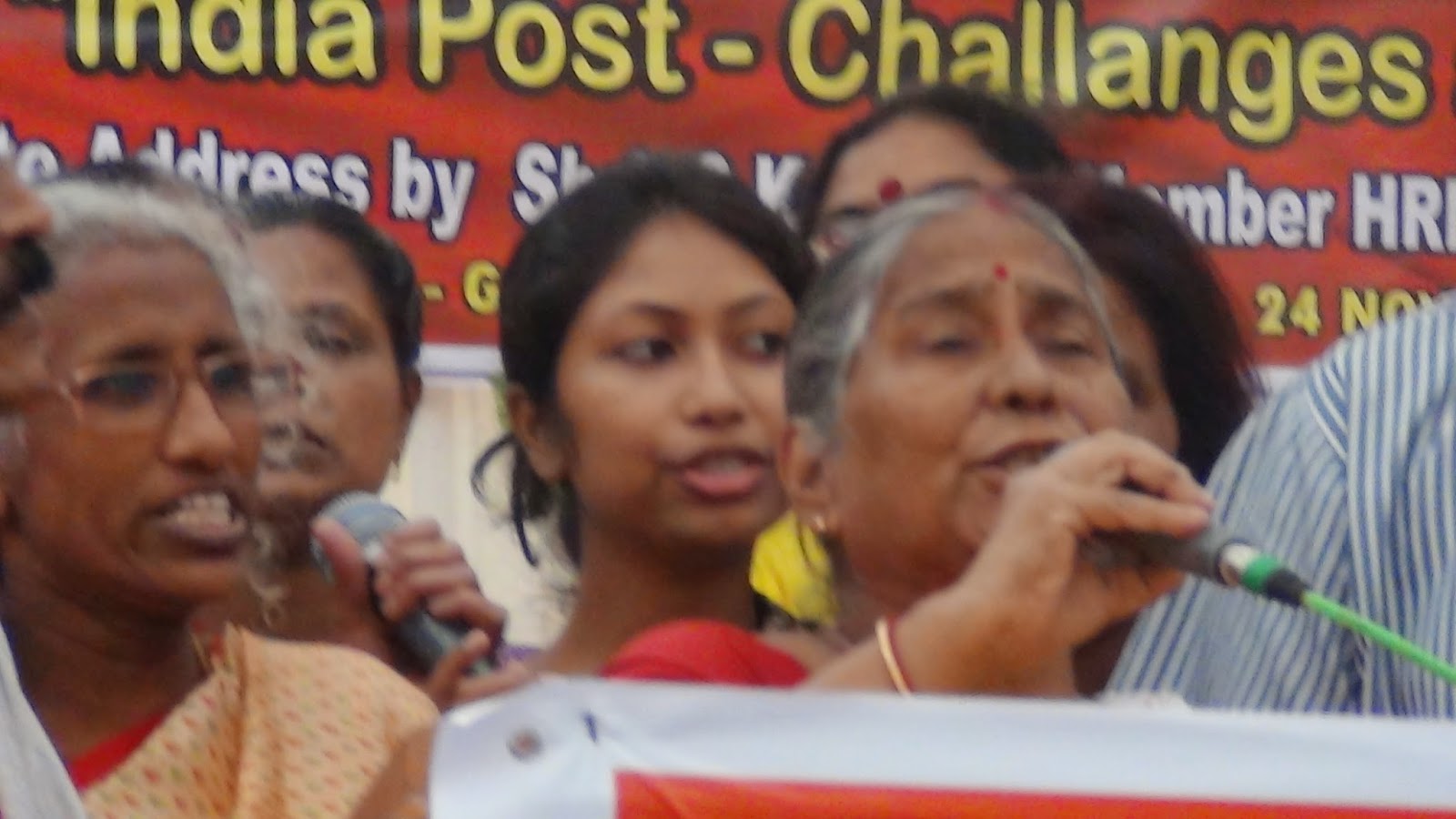 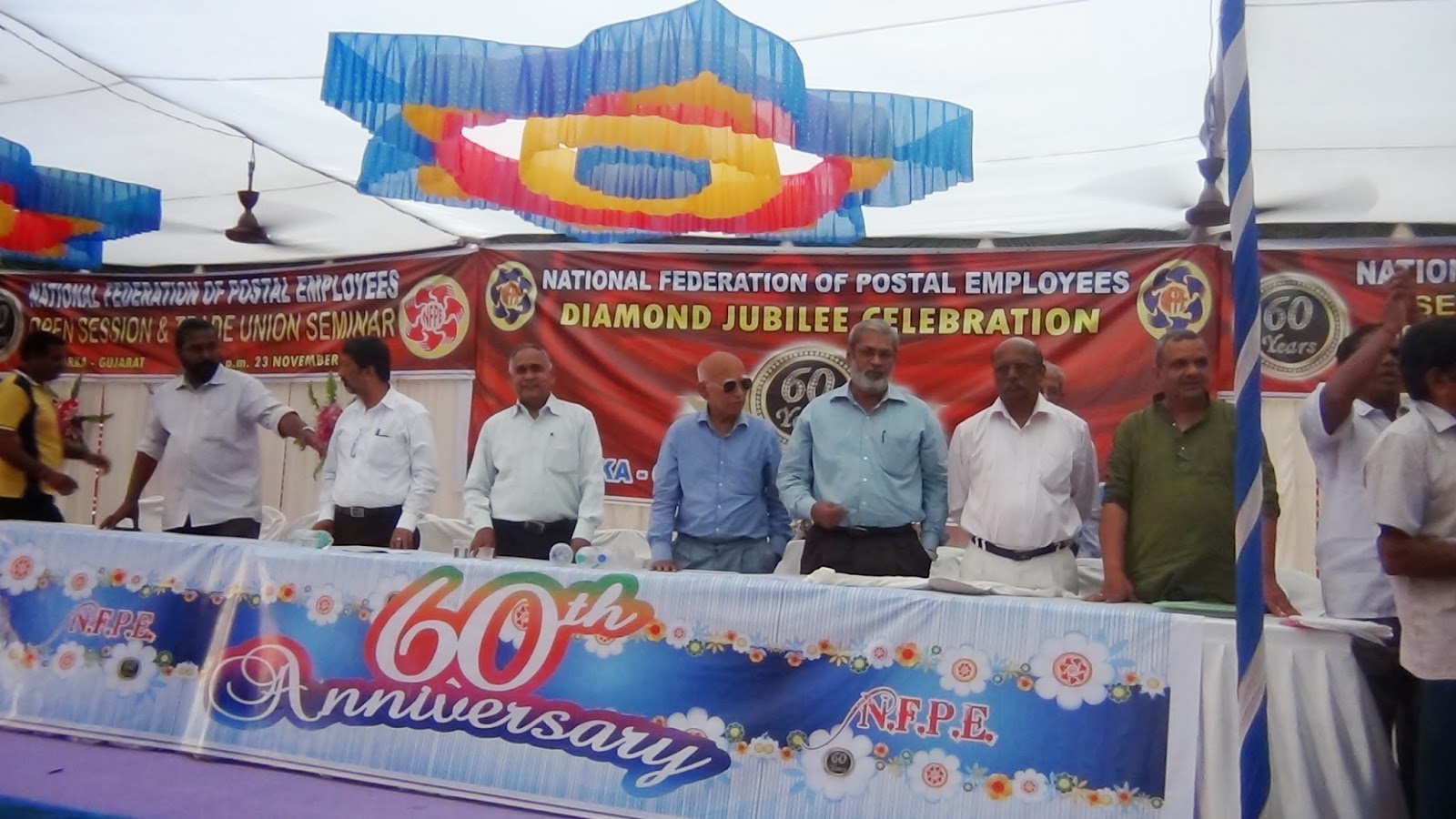 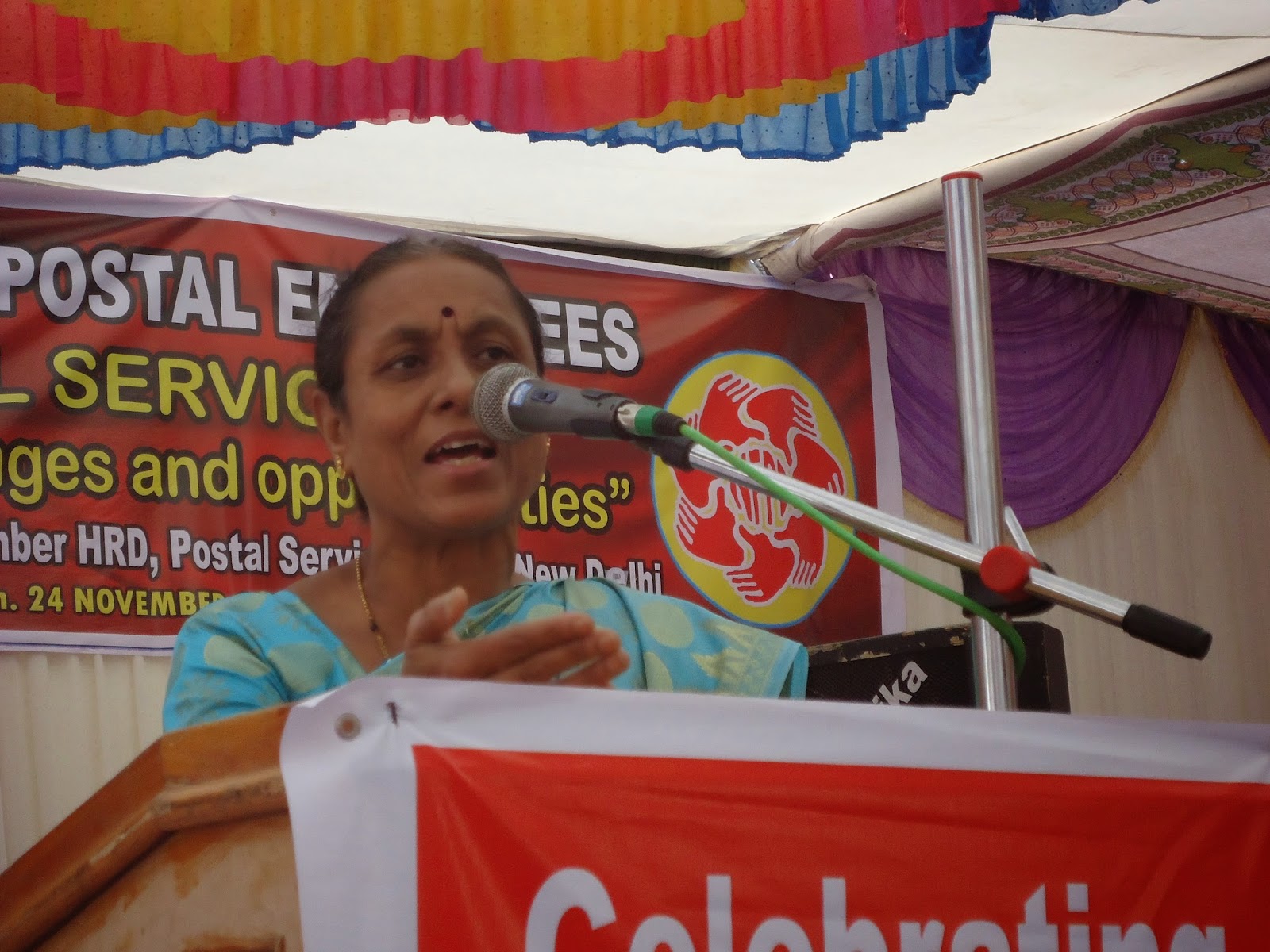 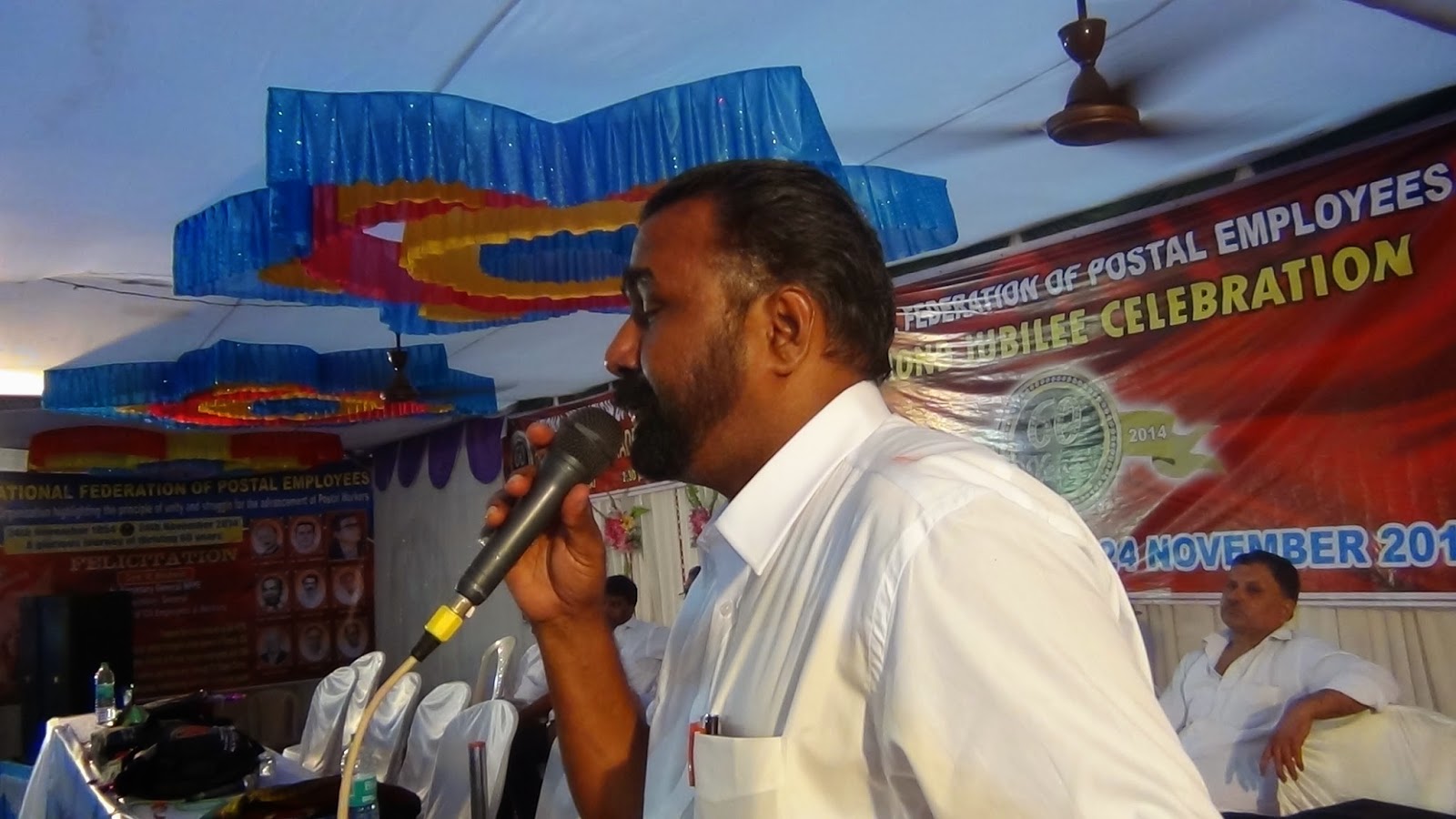