On 6th April, as per programme, the National Flag was hoisted by Dr Radhikaranjan Chakroborty, the Chairman of the Reception Committee. Com K V Sridharan, the former General Secretary of All India Postal Employees Union, Group C, hoisted the mighty NFPE Flag. The Inaugural Session started at 11.00AM.To conduct the Inaugural Session, a Presidium was formed by all Circle Union Presidents of Assam and N E.Com L P Saikia, president of All India Postal Employees Union, Group C, Assam Circle was the president of the presidium of the Session. Com Garga Talukdar, the joint convener of the JCTU, Assam and the Asstt General Secretary of All India RMS and MMS Employees Union Group C, inaugurated the Inaugural Session. In his inaugural speeches, he explained the National and international events in the context of neo liberal policy and its ill affects on the Postal department and its employees. He calls upon the working class to be united and fight against the onslaughts of the govt. The session was addressed by Com I S Dabas, General Secretary, P-IV, Com Giriraj Singh, General Secretary, RIII, P R Rao, General Secretary, All India Postal Employees Union, GDS (NFPE) and Com K V Sridharan, former General Secretary of P-III. The Inaugural Session was opened by the inaugural songs performed by the local artists. Com S Rahman, the Convener of the RCC extended the vote of thanks. The Mancha (stage) where the inaugural session was held was named after Com J. Bhattacharhee, Com Sasadhar Deb and Com Abdul Jelil who were the dedicated P&T leaders of N E Region. After lunch, respective delegate session was held.

In the evening of 6th April, an attractive cultural programme was organized by the local artists of Karimganj. The artists mainly sang the revolutionary and peoples songs. The Mancha (stage) where the cultural programme was staged was named after the names of Dr Bhupen Hazarika and Hemango Biswas who were the famous singer of this region.

On 7th April, a colorful procession was taken out from the conference venue. Hundreds of postal employees came from the villages and participated in the procession. The leaders of the Federation and the RCC of the Postal Employees of N E Region were in the forefront of the procession. Long one and half hours, the procession paraded the town. The open session was started at 12.00 hours by an opening song on Com Red Hero, Hugo Savez who passed away on 5th March, 2013. Dr Ashim Dasgupta, the former Finance Minister of West Bengal and renowned economist who was the chief guest of the open session addressed the delegates and the visitors. He explained that the present neo liberal economic policy pursued by the govt. can not protect the common people of the country. He tried to understand the delegates and the visitors present in the conference hall how to protect the interest of the people by an alternative economic policy.Com L P Saikia, presided over the Open Session. Dr Radhikarnjan Chakroborty, Chairman of the Reception Committee read out his Presidential address. The Reception Committee gave a warm felicitation to Smt. Basana Majumder, retired postal employees who stood firmly to go on strike alone in 1984 called by Com K Adinarayana, G/S P-IV on the ED employees’ demands. The delegates and the visitors applauded her. Fooding arrangement was nice. Thus Karimganj Joint Circle Conference was all round success.
The Regional Coordination Committee of Postal Employees Unions, Assam and NE Circle, have no words but to convey congratulation to the Reception Committee, Postal, RMS and GDS employees of Barak Valley and other sister unions who extended full cooperation in making success of the Joint Conference.
In the evening of 7th April, the local artists of Karimganj and a cultural troop of Agartala performed beautiful and attractive programme which satisfied the delegates. 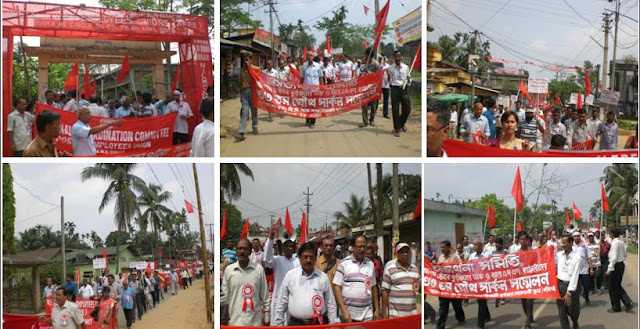 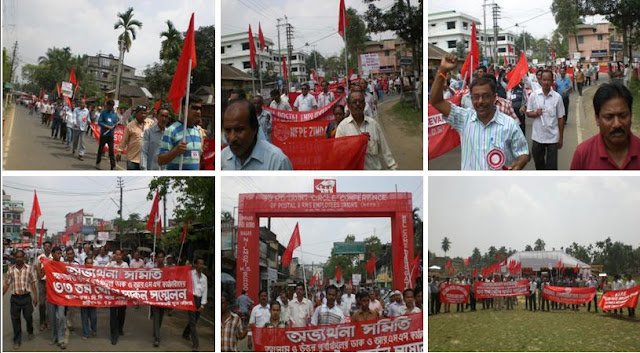