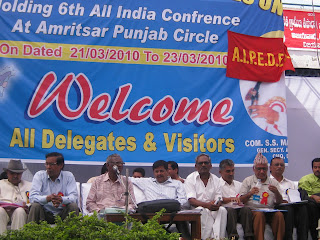 NFPE Secretary General in his speech in the Open Session underlined the need of total unity between the Postal Regular Employees and GDS for protecting our rights and making any advancement in our demands. The technical division occured in the movement due to the introduction of CCS RSA Rules should be overcome by our own initiative as was done in the year 1954 when under Reallignment Scheme ED Union was denied under NFPTE Federation. Secretary General NFPE once again urged for the GDS Union accepting the offer of "Associate Membership" and welcomed all the Circle Secretaries of GDS Union to participate in the ensuing 8th Federal Council of NFPE in New Delhi along with Comrade S.S.Mahadevaiah the General Secretary who was already invited to participate in the Council. It was urged that the participation of GDS leaders in the Council as Associate Members and joint deliberations on chalking out the future course of action of our movement alone can ensure unification of the movement. He assured that efforts for removal of technical objections under CCS RSA Rules would be taken at the appropriate time for ensuring affiliation of GDS Union in Federation after amending the Rules of Recognition of Federation. He also narrated that the leadership of Federation and GDS Union are now working together with better understanding taking into account the bitter lessons of the past. He wished that this unity shall be taken forward to next higher level.

Several speakers welcomed the unity efforts. Some speakers expressed doubts. Some other speakers took the hard line that no unity is possible without amending the Constitution of NFPE. All trends were there in the AIC. However, we desire and hope that the leadership of GDS Union will be pragmatic and realistic in assessing the situation properly and will come forward to accept the "Associate Membership" of Federation and will participate in the 8th Federal Council of New Delhi from 20th to 22nd June 2010 to pave way for unification of the historic movement of NFPE and GDS Union.
The AIC summed up to agitate to remove all negative recommendations and its effects on the GDS by building a common movement with the Postal JCA.

NFPE once again congratulate the full team of Office Bearers unanimously elected in the AIC and assures all cooperation from the side of the Federation.

Congratulation for all the office bearers.
By
R.Anandaselvakumar
BPM
9940745763

congrats for the new team of office bearers. the unity effort initiated is commandable. the need of the hour is unity of GDS AND DEPTL. EMPLOYEES. let us march ahead together to defeat the evil designs of the power-that-be