RECOGNITION OF UNIONS BASED ON LATEST RE-VERIFICATION GRANTED BY DEPARTMENT 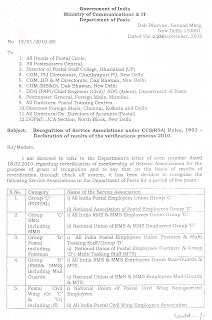 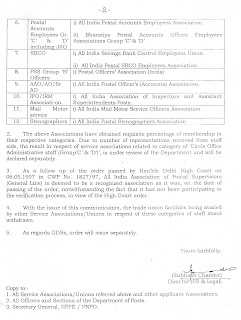 NFPE THANKS THE MEMBERSHIP FOR REPOSING FAITH IN OUR NEWLY FORMED SBCO AND CIVIL WING UNIONS - NFPE CONGRATULATES THE LEADERSHIP OF BOTH SBCO AND CIVIL WING FOR GETTING THE RECOGNITION.
P3, P4, R3, R4 and Postal Accounts Unions of NFPE have once again emerged as the biggest and first status unions.

Admn Union results will be released separately due to some objections on membership etc are pending to be disposed off.

GDS Union recognition is also expeccted to be released shortly.

The full text of the Government Orders extending recognition to eligible Unions/Associations can be downloaded by clicking on the scanned images of the orders above.