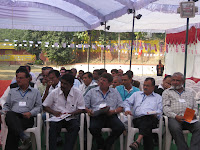 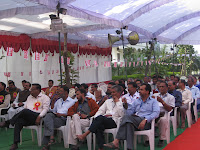 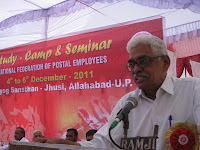 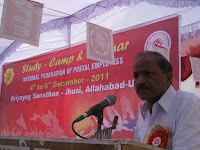 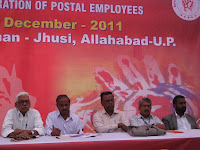 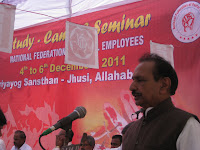 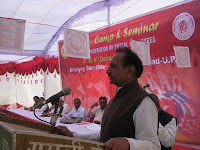 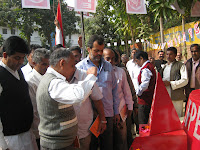 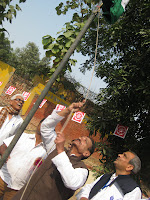 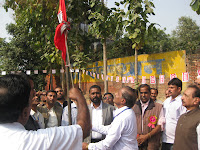 NFPE Organised a Three-Days TU Camp and Seminar in Allahabad [U.P] from 4th to 6th December, 2011.
Here are some photographic views of the TU Camp in which on the first day Comrade A.K.Padmanabhan CITU All India President inaugurated the Camp on 4/12/2011 and Comrade M.Krishnan Secretary General NFPE took a class on the History of Postal TU Movement. The session was presided over by Comrade D.K.Rahate the President NFPE. On the second day forenoon, Comrade K.V.Sridharan General Secretary P3 took the class on Departmental Rulings and Service Matters. This session was presided over by Comrade Sankar Mukherjee Vice President NFPE. Thereafter an interaction session by all General Secretaries was held. In the afternoon of second day, Professor Prabhat Patnaik eminent economist took the class on globalisation policies and service sector, that was presided over by the Secretary General NFPE. On the final day a combined session of TU Camp and open session was held which was inaugurated by Comrade S.K.Vyas President Confederation and he took a class on Demands Charter of Confederation and Comrade K.Ragavendran Ex-Secretary General NFPE took a class on JCM Machinery and role of Confederation. The open session was presided over by Comrade T.P.Mishra senior leader. The TU Camp and the Seminar as well as the open session were grand success. The UP Circle Unions and Allahabad Postal Comrades have organized the programmes with excellent arrangements.
Posted by NFPE at 6:00 PM